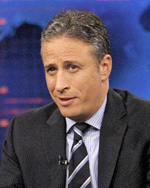 During the 2004 election campaign, Jon Stewart’s The Daily Show became the single most watched news source among young people. Stewart is an outspoken critic of the Iraq war, and routinely ridicules the Bush Administration and Republican priorities. But in recent weeks, the Stewart show has taken a new turn. It began with an interview with Bill Clinton, which saw a star-crossed Stewart heaving softballs to the ex-President. Stewart’s servility to power then got worse with his cozy interview of former Mexican President Vicente Fox, and went to a new low with his soft-focus talk with Lynne Cheney, wife of the Vice-President. Is Stewart seeking a broader audience, or has his mainstream popularity cost him his edge?

Jon Stewart became a folk-hero among progressives during the 2004 election campaign, and is still seen as a rare beacon of light in a drab media landscape. That’s why some of his recent episodes are so troubling, as they show Stewart moving into the boring and politically conventional mainstream.

When Stewart avoided asking any tough questions to Bill Clinton when recently interviewing him about his new book, I gave the talk-show host a pass. After all, Clinton is a larger than life figure and Stewart was likely thrilled to have him on his show.

But Stewart devoted nearly half the show to puffing Bill’s self-described global agenda, carefully avoiding any mention of NAFTA. And Bill did not hesitate to use the popular forum to promote Hillary’s candidacy.

The Clinton interview would not have bothered me had it not been soon followed by Stewart’s equally servile interview with ex-Mexican President Vicente Fox.

Fox was a disaster as President, as the ex Coca-Cola executive’s reliance on free market policies brought the country’s economy to its knees. Fox has been beset by widespread corruption allegations, and there is nothing he did as President that justified his using Stewart’s show to promote his book.

But Stewart spoke to Fox not as a failed President, but as if he were a statesman full of valuable insights. The low point was when Stewart asked Fox what he thought of Bolivian President Evo Morales, who had been a recent guest on Stewart’s show.

Fox said Morales was “terrible,” and said both he and Venezuelan President Hugo Chavez would drive their countries into disaster. Rather than challenge Fox’s right-wing attack, Stewart responded by saying “I wish I had asked Morales about that when he was here. Now I don’t know who to believe. I really hate politics.”

Jon Stewart doesn’t know who to believe between a right-wing manipulator of the truth like Vicente Fox and Evo Morales? How then does he know Dick Cheney isn’t telling the truth?

Sadly, I think Stewart knew Fox could not be trusted but did not want to challenge his guest. Instead, he legitimized Fox’s attack on Morales, and essentially told his audience that they might want to reassess any positive image they got from Morales’ appearance on The Daily Show.

Stewart even went so far as to strongly recommend Fox’s book. Why is a show catering to young, hip progressives even giving someone like Vicente Fox an audience? Every author in the world wants to get on Stewart’s show, so it is not as if they were stuck with Mexico’s failed ex-president (and yes, I realize that by writing this I’ve blown the remote chance I had of getting on Stewart’s show next year to promote my upcoming book on the impact of Cesar Chavez and the UFW on 21st Century progressive movements.)

But Fox’s appearance was not the worst of it. Stewart then featured a lengthy interview with right-wing pro-censorship activist Lynne Cheney, wife of the Vice-President.

Why is Stewart giving someone like Lynne Cheney access to an audience she would never otherwise reach? She’s not exactly in need of such charity, and her tenure as head of the National Endowment for the Humanities showed her to be ideologically-driven in the culture wars.

As Jon Wiener put it, , Cheney was “the right-wing warrior who used her post at the NEH to fight the Republican culture wars of the eighties; the ideologue who, after continuing to serve as head of the NEH through the Bush years, resigned following Clinton’s election and moved to the American Enterprise Institute to write Op-Ed hit pieces, and later co-hosted the now-defunct CNN show Crossfire Sunday–she was the one ‘on the right.’ In her heyday Lynne Cheney was not just a conservative gadfly; after she targeted the National History Standards in 1994, the Senate voted 99 to 1 in support of her call to defund the project.”

Yet Jon Stewart turned over a third of his show to Cheney.

What is going on here? Has Stewart decided to become all warm and fuzzy while Stephen Colbert makes the pointed political attacks? Is this about building his audience by attracting viewers previously turned off by his progressive edge?

Whatever the reason, we need the old Jon Stewart back.