Is it Safe to be a Pedestrian in San Francisco ? 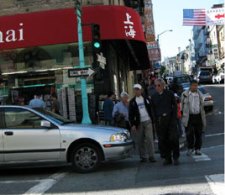 Two New Year’s Eve incidents that saw two pedestrians killed by vehicles in San Francisco sparked a social media barrage that highlighted a growing concern among SF residents that crossing streets can be a dangerous affair. But the reality, depending on who one speaks with, might show that pedestrian deaths are either remaining steady year-to-year, or on the rise, says WalkSF, a community-based organization hoping to reduce pedestrian deaths dramatically over the next 7 years.

A 6-year-old girl was killed in one crash near Civic Center when a driver failed to yield to pedestrians. In the other accident, a 86-year-old was killed in the Crocker-Amazon neighborhood the same day.

Both incidents sparked massive social media coverage as activists and everyday residents spoke openly of the need to protect the city’s streets better from errant drivers. Yet, police are taking a much sober view of the recent deaths and the “reported” trends that have given credence to the notion that San Francisco is becoming a more dangerous city to walk in. “What we are seeing is the rise in awareness of pedestrian safety on our streets, but that doesn’t necessarily mean we are witnessing a rise in the number of deaths,” said one police official, who asked not to be named by the media.

While the official didn’t give specific statistics, he did say that while the deaths are sad and are being investigated – the two drivers have been arrested – the online community has created what he dubbed a “state of panic” when “there really isn’t any reality to the idea that more pedestrians are being killed on the city’s streets.” According to WalkSF, a local community organization that aims to build safer streets for those who use their feet, the number of deaths as a result of drivers hitting pedestrians was the highest it has been since 2007, with 21 people being killed last year.

“We’re seeing an increase in media coverage,” WalkSF Executive Director Nicole Schneider told Beyond Chron. “[And] we’re deeply saddened by the recent surge in pedestrian fatalities, and hope that the media can help us reach the people of San Francisco to come together around the prioritization of pedestrian safety,” she added.

For many in the city, each incident has been highlighted on social media sites, notably the micro-blogging site Twitter and Facebook, creating what some media observers argue is an almost “panic-like state” among residents. Schneider believes, to the contrary, that the media and social media are doing a positive job of putting attention on pedestrian safety. “We’re all pedestrians at some point of our trip, and we all deserve the right to walk safely,” continued Schneider.

On New Year’s Eve, for example, thousands of tweets and Facebook posts talked extensively of the dangers of being out on the streets in San Francisco, arguing that police are not doing enough to curtail the dangers of walking and lacking a crackdown on drivers who are responsible for injuring, or even killing, pedestrians. “The number of tweets and social media messages that I see when reports of a pedestrian being killed is massive and huge, and this is something that truly concerns San Francisco residents, but I have concerns,” said a local journalist, who has covered crime in the city for years.

For her, the rise of the Internet and online activism has given way to an overload of information that doesn’t necessarily fit in line with the statistics and reality on the ground. “Certainly there is a major concern about safety in the city, and pedestrians included, but the truth is that we must also take a step back and look at recent years before throwing a panic into the air,” she argued. “2013 might have seen a higher number than the past five years, but it is within the norm.”

According to Mayor Ed Lee’s office, the number of pedestrian deaths in the city has remained around 15-20 deaths for the past decade, and much progress has been made since then-Mayor Gavin Newsome set goals for reducing deaths and serious injuries through the establishment of the Pedestrian Safety Task Force in 2010.

While activists argue there is a need for new attention to street safety, the San Francisco Police Department believes the online chatter that is created by the deaths is important, but they also argue that there hasn’t been a noticeable increase in deaths to warrant any sort of panic that social media seems to garner. Activists want more action by authorities to tackle the issue and the two deaths on New Year’s Eve may give backing to their calls for renewed strength in grappling with pedestrian safety.

However, police and other observers argue that while any death is a dark mark on the city, there needs to be an intelligent discussion over what is actually happening and the perceptions that have been created. “It can be difficult for police and other groups to educate people if there is a pre-conceived notion that it is becoming more dangerous to walk on the streets, when this is not entirely true,” said the police official.

For Schneider and WalkSF – the leading organization fighting for pedestrian safety – the issue is about awareness and education. She highlighted the importance of social media to the cause, arguing that the attention that online activism is having can help bring about the ultimate goal of reducing fatalities among pedestrians.

“Through advocacy and social media, Walk SF and our members won the release of the Pedestrian Strategy in April 2013, which calls for a reduction in pedestrian deaths and serious injuries by 50 percent by 2021,” added Schneider. She, along with the police, hope that 2014 will be a positive year that sees dramatic efforts to help ensure the safety of pedestrians. Together, police and Walk SF, are working toward a safer street for all San Francisco residents.