Is It Pride Really? 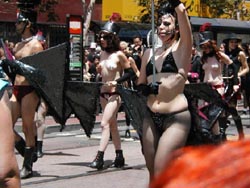 This Sunday’s parade called Pride kicks off at 10:30. This is the 36th time around for this grand demonstration of marketing and public relations. Like the Emperor who wore no clothes, this event has become a grand old lady with a naughty secret. We all know the secret and there is a collective unstated agreement not to tell.

To fully understand looking back to a similar event in 1978 provides both a reality and a contrast to what it’s all about. In June, 1978, Harvey Milk was the city’s first openly gay supervisor. “Come out, come out,” he proclaimed. It was this June parade which provided the opportunity to, indeed, come out as a gay man or lesbian.

Majestically moving from a side street to Market Street, a young very attractive school teacher from Kansas led a band put together at rehearsals conducted on the dance floor of the Trocadero, one of those famed disco dance palaces.

The man was Jon Sims. The song was “California, Here I come,” and musicians called themselves the San Francisco Gay Freedom Day Marching Band and Twirling Corps.

The premier entertainer at the Trocadero and other dance pavilions like the I-Beam and Buzzbys was Sylvester. His music survives from an incredible concert at the War Memorial Opera House. It was the west coast version of “Judy Garland at Carnegie Hall.”

It was also the time for sorting out the response to the gay bashing murder of Robert Hillsborough on a Mission District corner. On November 27, this same community would mourn the assassination of Milk and then mayor George Moscone.

It was on that November 27, 1978 evening when the San Francisco Gay Men’s Chorus would perform for the first time. Few noticed that this week is the 25th anniversary of an historic tour of America by this chorus.

Today’s chorus makes little effort to remember their director of that day, Dick Kramer. It was Kramer who provided the direction which produced their high quality of musical excellence. Kramer, who lives in San Francisco, will find he is one more of those forgotten heroes of a remarkable time driven by a passion and drive to fill what was called the “Gay Liberation Movement.”

This weekend there will be a parade down Market Street just like that Sunday in 1978. Be clear, this Sunday will has little to do with being “gay,” nothing to do with “liberation,” and any person claiming this parade is about “a movement,” doesn’t know the meaning of the word.

The 1978 parade was driven by the courage to take a stand, to dare to walk down Market Street, and the creativity to be flamboyant, outrageous or event formal.

In 1978, the operative word was “gay.” There were gay men, women and just about anything else.

Those women on their motorcycles were “Dykes On Bikes.” Not women, not lesbians. No, they were Dykes, very, very out dykes!

After just a few years, those Dykes on Bikes had a pail of ice water thrown on them. In the future they would officially be known as “Women on Motorcycles.” As history makes clear, the name change was much more appealing to prospective advertisers.

As the “Dykes” were moved to the background, activist women, led by Robin Tyler, stormed the stage in 1980. From that moment forward this event became the San Francisco Lesbian/Gay Freedom Day Parade. In following years, political “inclusiveness” added, “bisexual” and “transgender.” An inclusive title became cumbersome and uncomfortable for many event producers, and for even more financial investors.

With that the event authenticity would be condensed to the phrase, LGBT. Others simply advocated eliminating all those sexual terms. Enter the word “Pride.” Pride had a great sound, seemed to inspire excellence and, more than anything, was an extremely safe word for the corporations of America.

The reality is most of those marching in the 2006 parade would be just as comfortable, possibly even more so, if the date was moved to October and renamed the Columbus Day Parade. By adopting the word, Pride, the event could simply ignore the reference to a sexual liberation movement.

Rather, this event is a commercial extravaganza with few parallels anywhere in the world. Give credit where credit is due. Corporate branding, not sexual liberation, drives the event. Few will make it through Civic Center this weekend failing to see the names, Bud Light, Delta Airlines, Comcast, Wells Fargo, Bank of America, Kaiser, Showtime and KRON-TV

These corporate sponsors pay big bucks, not to celebrate the liberation of gay men, lesbians, or bisexual and transgender people. They eagerly pay to join a “Celebration of Pride.”

The Bay Area Reporter, one of America’s leading community journals, provides a front page main story on the parade and celebration. “Gay” and “lesbian” appear only in identification of named musical organizations and nowhere else.

Survival is no longer a stand against violence. Rather, it describes the ability to pay the enormous fees driven by an event budget on the heaven side of a million dollars. Corporations wishing prime space in Civic Center face fees in excess of $8,000 per booth.

For me, I choose this to be a year about the liberation of gay men, lesbians, bisexual and transgender persons.

I choose to celebrate Frederick Hobson. His death underscores a vacuum which grows larger with his passing. Much more comfortable as “Miss Kitty, this very gay activist put together a political fundraiser quite remarkable in hindsight. Highlights being male strippers falling on then Assessor Doris Ward and several elected officials departing when they learned this party had as many on as off the invitation list. Miss Kitty mailed invitations to her party and then phoned her enemies letting them know they were not invited to said party.

To not forget Dick Kramer and the thrill of watching his direction of the Gay Men’s Chorus in Washington, D.C. at the Jefferson Memorial is what a liberation movement is all about. Forgotten is the reality that several cities, like Dallas, Texas, refused to even allow the chorus to use their name on the marquee of the center where they performed.

The inability of this chorus to honor and acknowledge their first conductor, this historical figure of our movement, is shameful.

True liberation is found by listening to the Transcendence Gospel Choir at the City of Refuge Church on Howard Street near 6tth Street. It is also found in watching the story of Fr. Mychal Judge, the first casualty of the September 11, World Trade Center tragedy. Thursday an enthusiastic audience viewed, “Saint of 9/11,” the story of this Franciscan Friar who shows enormous strength as his vulnerabilities are revealed.

Today, the sole redeeming factor, the only justification for this falsely named “Pride” parade and celebration lies with that one person who will experience this event on Market Street and in Civic Center for the very first time.

That one person is what it is all about. The seemingly endless examples of petty power, bitchy queens and selfish individuals evaporate when everything is examined in the context of that one person.

To those who remember that moment for themselves, the challenge is to be vigilant to not allow the forces of corporate commercialization to squeeze out what remains of a history and a memory which extends back in our past for 35 years.

To remember this past 35 years brings the challenge to remember a 25 year journey this community has traveled in the fight against HIV and AIDS. No city, no community and few individuals can review their life and avoid the pain, the death, and the hope which gives meaning to a comment made 25 years ago right here in San Francisco. Never should it be forgotten that “People with AIDS are not victims.”

Commemorate, Educate, Liberate, Celebrate! is the theme of the 2006 event. For most, these are truly empty words. The whole thing works only when those who participate find their own personal reasons to commemorate, be liberating and find a way to make those words educate and celebrate.