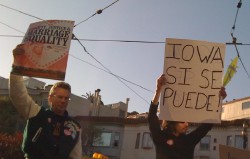 Until last week, gay marriage was perceived as a liberal, bi-coastal cause foreign to so-called “Middle America.” Massachusetts became the first state to grant marriage equality – and recent progress in Connecticut, Vermont and New Hampshire further confirmed that narrative. When same-sex couples flocked to San Francisco in 2004 to get marriage licenses, Republicans easily manipulated that fact to marginalize us. The passage of Proposition 8 was so depressing – precisely because we assumed that California (of all places) would be the state to reject it. But a unanimous decision on April 3rd by the Iowa Supreme Court granting marriage rights to all couples – and ruling sexual orientation to be a “suspect class” – has shifted the conversation. It’s unlikely Iowa will pass another Prop 8 to undo its Court decision, because changing the Iowa Constitution is far more difficult than California’s. Gay marriage will be allowed to run its course in Iowa, and – like Massachusetts – Hawkeye State residents will learn that the sky hasn’t fallen, and attitudes will evolve. It can be tough being gay in Iowa, and advocates who fought there must be commended. Now the Court decision reshapes the struggle – helping to bridge our cultural differences.

I grew up in Chicago, and like most people pictured Iowa as a backwards, rural farmland. When my high school got a new teacher from Davenport, we teased her relentlessly about her state. But Friday’s Court decision was not surprising if you know about Iowa history. Its Supreme Court refused to uphold slavery in 1839 – eighteen years before Dred Scott. Iowa struck down school segregation in 1868 – eighty-six years before Brown. And it was the first state to allow woman lawyers – in 1869. “In each of these instances,” wrote the Court in Friday’s marriage decision, “our state approached a fork in the road toward fulfillment of our constitution’s ideals and reaffirmed ‘absolute equality of all’ persons before the law.”

When a 4-3 majority of the California Supreme Court granted marriage equality last year, it wasn’t hard for the religious right to rail against “activist judges” in the land of fruits and nuts. Now the Hawkeye State Court has a unanimous decision that echoed our ruling, which will have a far greater impact in re-shaping the issue. “We picked Iowa because many of us who don’t live in the Midwest might think of it as being a conservative monolith,” said Jennifer C. Pizer of Lambda Legal. “But people who know Iowa have been saying for some time that it’s different from its neighbors. There’s a tradition of independence and willingness to stand up on issues of fairness.”

Iowa’s Court decision also affirmed what California’s court had said: sexual orientation is a “suspect class.” For years, gay marriage advocates went to Court and argued that restricting marriage to opposite-sex couples was a form of gender discrimination. I never liked that argument (gay men and lesbians were not being denied marriage because of their gender), but the reasons were strategic – Courts had ruled gender to be a “suspect class,” not sexual orientation. If you can’t prove the discrimination affects a recognized “suspect class,” it’s a lot harder to win.

By finding sexual orientation to be a “suspect class,” Iowa became the second state – after California – to do so, setting an important legal precedent for the rights of LGBT people that go beyond marriage. And a unanimous decision will help solidify it.

Opponents of gay marriage always scream about “the children,” which panders to society’s worst fears and emotions. Even in California, the scepter that “our kids will have to learn about it” scared enough voters into passing Prop 8. But the Iowa Court took the issue head-on, using plain language that even California’s Court didn’t use.

The Iowa Supreme Court acknowledged an obvious fact: a lot of gay couples already raise children. Besides referring to the psychological data that kids with gay parents are just as emotionally stable, the Court deftly exposed the fallacy of the “children” argument. Marriage rights for straight parents doesn’t prevent child molesters from raising kids, but denying marriage to childless gay couples does nothing to help kids.

Iowa’s Court decision has naturally prompted a right-wing hissy fit, but don’t expect the state to pass a constitutional amendment like Prop 8. Unlike California, where all you need to change the constitution is gather a bunch of signatures for a Proposition (and then convince a bare majority of the electorate to support it), Iowa requires two consecutive sessions of the state legislature to vote to put it on the ballot. When the Republicans controlled the Iowa legislature, they couldn’t muster enough votes to put it on the ballot. Both chambers now have Democratic majorities, and the leaders in each house issued a joint statement last week commending the Court decision.

After the California Supreme Court ruled its decision last year, I falsely predicted Prop 8 would fail – for the same reasons. The problem, however, was that voters in a huge state (with many segregated communities) were asked to repeal gay marriage just six months after it had gone into effect. It’s also true that “No on 8” ran an awful campaign that snatched defeat from the jaws of victory. But even if they had run a smart effort, it was an uphill struggle with very little time to convince the electorate.

It’s not easy being gay in Iowa, and advocates who fought for this have necessarily had to convey their message in more dangerous territory. The state legislature has only one openly gay member – State Senator Matt McCoy, who offered a cogent five-minute video to explain why marriage equality in Iowa is here to stay. It’s instructive to compare McCoy’s reasoned, logical explanation – with SF Mayor Gavin Newsom’s cocky boasting about California’s decision (“whether you like it or not”) that became a Prop 8 rallying cry.

McCoy and Newsom had the same message – marriage equality is here to stay, and the arc of history leads towards justice. But there’s a profound difference at how they conveyed it, and what it means for the future of gay marriage fights.

Notice that McCoy, despite the challenging political environment of being an Iowa legislator, was not afraid to say he was openly gay. He also must have learned (through experience) that changing hearts and minds requires a respectful tone that is not condescending. Newsom, on the other hand, has a track record of not engaging those he disagrees with – and a fear of unscripted moments. Newsom’s arrogance made him the poster-child of bi-coastal elitism.

As the struggle for marriage equality moves to other states – and a national effort to repeal the federal Defense of Marriage Act – we can learn a lot from the success in Iowa. First, gay marriage is no longer a liberal coastal phenomenon in places like San Francisco or Boston. It’s even possible in places like Iowa. Second, changing hearts and minds will require people to discover that their own friends, neighbors and family are gay – and just want the right to be recognized. Finally, don’t condescend – we are fighting to be accepted, not to shove our agenda down anyone’s throats.