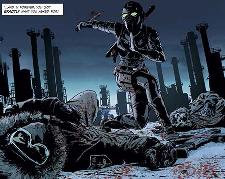 What would a world where the 1% are a thousand times richer than now look like? Writer Greg Rucka offers his answer in the new Image Comics series “Lazarus.” Co-created with “Gotham Central” artist Michael Lark, “Lazarus”’ dystopic future sees society stratified into mega-wealthy Families, the Families’ servants, and the Waste. Protagonist Forever Carlyle is a Lazarus, a genetically modified one-woman security detail/black ops team who begins questioning her existing social order.

Beyond Chron (BC): “Lazarus”‘ world sounds like Occupy Wall Street’s most awful nightmare come true. Did you feel OWS was an effective popular movement or one doomed to failure?

Greg Rucka (GR): The Occupy Movement was one that I felt strongly affiliated with. My participation was limited, though I was paying close attention. As to its effectiveness, I think we’re still seeing the effects. A movement for dynamic, dramatic change that actually succeeds is such a rare thing, and the powers arrayed against OWS were (and remain) mighty. But a radical and immediate economic shift, or even an attempt to bring to justice those criminals who have so abused the 99%, I fear that was always doomed to failure. As to why… too many reasons, and all of them speculation. ## {more} ##

BC: What particular real-life phenomena led to the world of “Lazarus?”

GR: I know that I was looking at the presidential campaign, the Super PACs, OWS, listening to Romney, thinking about “corporations are individuals” and austerity programs (Greece in particular) and found myself wondering just how bad could it all get? That was the catalyst, this idea that 99% would become 99.99999%, that 1% would become .00001%. It wasn’t likely, I felt, but I couldn’t avoid what was in the news – reports of increasing profits, bonuses, etc, and at the same time growing unemployment, etc. That disconnect was jarring. So it all combined, everything from the Koch Brothers to the IMF to the Supreme Court.

BC: Feudalism was the word you used to describe the power structure of “Lazarus.” I’m trying to envision what would be the most jarring absence in this world.

GR: I’ve been using Feudalism as a short-hand, but I suppose it’s an accurate depiction of the world Michael and I have created. Nation-states in our world have rendered themselves irrelevant, and largely impotent. So much of governance in the world today lies in the hands of the wealthy, it seemed a logical extension that supreme wealth would in turn reveal itself as supreme power to such an extent that representative government would be representative in name only.

I’m genuinely not certain what the most jarring absence would be. Perhaps the fundamental breakdown of the civic contract, the absence of governance, means that any particular Family is only going to support what they feel they need and to hell with the rest. If there are roads they need, those roads will be maintained. Even education becomes controlled in this context – each Family selects and tests members of the population to be educated and trained for certain services. Outside of that, you are, almost literally, “waste.”

BC: Just how inbred and incestuous have the Families become? How does innovation which doesn’t serve a Family’s needs thrive in this world?

GR: One of the first things that my wife, Jen, said when I was working out the world and talking to her about it, was that the Families must be awfully stagnant. I considered that, but it actually seemed to me that the opposite would be the case. Research – in particular scientific research – is a cost-heavy undertaking. It requires tremendous resources, and a commitment to that research. It made more sense that the Families would actually invest a fair amount in the search for innovation, if for no other reason than to keep ahead of their rivals.

These are very, very jealous Families. They covet what they do not have, and they guard what they do. They don’t want to share, and they’re afraid of losing their power and possessions. That, by necessity, has created a very incestuous and self-serving paradigm. In the case of the Carlyle Family – Forever’s family – their wealth is derived from agra-business, and in particular, from genetic modification of agra; the Monsanto analogue is intentional, clearly. It’s not a far cry to extend that genetic research from crops to people, and it’s not that much farther to extend it to the Family using such research for their own ends. Of the Carlyles, Forever is the youngest, 19 years old. Her next closest sibling is in her 50s, and looks like she’s in her 20s. You can only guess how old her father really is.

BC: Forever is the product of genetic manipulation in the laboratory. Wouldn’t that imply that she’s been preconditioned to be permanently loyal to the Carlyles? How can she develop an ethical system that diverges sharply from the “grab it all” ethos of the Carlyles?

GR: You’re asking questions that are answered in the comic. 😉 She’s been raised to believe certain things. But augmenting a body and controlling thought and emotion, these are very separate things. In the first issue, she’s given oxytocin treatments – without her knowledge – to make her feel more connected and loyal to her Family. And that works… to a certain extent.

But part of what you’re asking, that’s what the series itself is about. Forever knows something is wrong, but she doesn’t know what it is. When she asks, she’s told that the problem is with her, not her world. Part of her story is her journey from there.

BC: Given that democratic processes sound as if they’re extinct in “Lazarus”‘ future, what type of political change would be possible?

GR: For the world to change, the Families must fall. I can’t say more than that.