Is the Internet Good for Us? 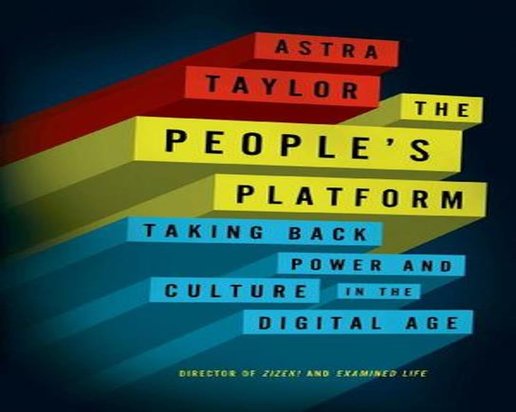 New books examining the broader social impacts of the Internet fall into two camps. Some view the Internet, new media and social media as forces of liberation; others, as reinforcing oppression.  My reading has found both approaches relying on  superficiality rather than nuance that the subject demands.

That’s why Astra Taylor’s new book, The People’s Platform: Taking Back Power and Culture in the Digital Age, stands out from the pack. It is a breath of fresh air both in writing style and analysis. Taylor questions common assumptions about “free” media, the allegedly empowering role of the new media world, the progressivity of “pirating” culture and other issues in a way that forces readers to think more deeply about them as well. Taylor  shares much of the left’s critique of the Internet world, but her thoughtful assessment of new media will even  leave readers who disagree with her conclusions  appreciative of her analysis.

It’s All About Advertising

Taylor makes a convincing case that when the worldwide web, new media, and social media are taken collectively, their primary function is advertising and marketing. Advertising for products, people, and videos is joined by a relentless drive for self-marketing and promotion that has no rival in the pre-Internet world. New media demands the branding of absolutely everything. It subjects friends, family and self to personalized and business marketing campaigns. In an era where cities pass laws to limit advertising billboards, far less attention is paid to the massive advertising blitz that dominates—and funds—new media.

What does it mean for society to have so many people spending 24/7 promoting their personal brand? A society where one compiles “friends” so as to expand their marketing base? A society where evaluations are based on what we “like,” not what we find significant, important or stimulating?

Taylor has thought long and hard about these questions. Most of us have not.  Or if we have, its about our own time commitment to self-marketing rather than the broader implications of millions of people promoting their work to others just as we are. Taylor reminds us of that our endless drive for hits, tweets, viral videos, Amazon rankings and Google mentions is not healthy for ourselves or society as a whole.

She’s not simply addressing the fact that people now must check email on vacation, or are always in work mode. She’s focusing on broader questions. Such as how new media has brought a constant public ranking system to people’s sense of self-worth, one which is as tilted to the privileged as the rest of society.

And privilege is what new media is also about. It is not a meritocracy in the sense that the most insightful articles get the most hits, and are ranked highest in Google searches. The Internet is as much rigged for the wealthy and powerful as other social spheres, and those who believe otherwise especially need to read this book.

True, the Internet put Michael Brown’s murder in Ferguson on the national radar in a way old media never could have done. And as I describe at length in The Activist’s Handbook, new media offers activists critical tools for building movements and winning progressive change.

Taylor does not question that new media tools can promote campaigns for greater social, gender and economic injustice. But she also asks that we step back and look at the big picture. And the bigger picture of the Internet’s social impact is less positive. For example,  I often praise the Internet for ending media gatekeepers control over news and allowing people with ideas to express them on websites like this one. But as Taylor points out, the vast majority of online news traffic is directed to traditional corporate media sites. Top viewed news and video traffic are far more likely to involve cats, babies, celebrities or corporate-funded stories than information that helps people make sound policy choices for society or their own lives.

Taylor reminds us that the Internet is not television, with which it is often compared. People could not carry televisions around with them as they do IPhones. Televisions must be turned on to provide content, where email, texts, instant messaging, tweets etc are sent to passive recipients. The Internet and social media impact society far more than television or any other communication method, yet people act like it’s all fun and games.

Those musicians victimized by online piracy of their music know the Internet’s serious side. As do those like Taylor whose documentary films are pirated before opening despite being produced by a progressive, non-corporate figure.

Ani Difranco used to talk about folks  justifying pirating music because corporations charged too much for CD’s. But they were also illegally downloading her music, despite her having a progressive, independent record company.

Taylor devotes a lot of space to the issue of online piracy because it puts her at odds with some on the left who see attacks on copyright laws as  “progressive.” If “property is theft,” than artists have no basis for claiming they should be paid for their work. Or to complain when it is pirated and profits then generated by those unconnected to its cultural production.

What Can Be Done?

Unfortunately, the Internet’s profound challenge to economic, social and gender justice is not easily changed. And Taylor recognizes this. Trying to end the book on a hopeful note, her concluding chapter offers “A Manifesto for Sustainable Culture.” But it’s more a set of tentative ideas than a manifesto. Taylor is too smart, too honest and has too much integrity to make believe there are easy answers to reforming our communications infrastructure. A number of the suggestions she does advance involve additional government oversight and regulation, not a likely outcome in the current or forseeable political climate.

Taylor deserves our thanks for provoking readers to think hard about some very troubling realities about the Internet.   It is the type of work that should have book groups debating issues long into the night. Assuming book groups can survive  when many prefer to instead use evenings catching up on Facebook, inviting others to join them on LinkedIn, or updating their website.

Randy Shaw is Editor of Beyond Chron. His other books include Beyond the Fields: Cesar Chavez, the UFW, and the Struggle for Justice in the 21st Century