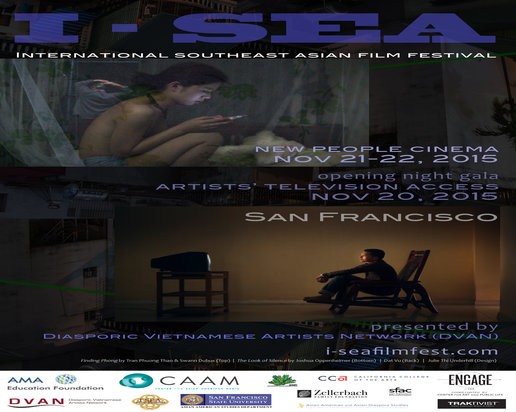 Coming this weekend to Artists’ Television Access and New People Cinema is the inaugural edition of the International South-East Asian Film Festival (hereafter I-SEA).  The Diasporic Vietnamese Artists Network produces this festival and launches it in recognition of the fortieth anniversary of the end of US military involvement in Southeast Asia.  Attendees at this three-day program of 9 feature films and 22 short films will have an opportunity to get an introduction to the people, culture and history of those with family roots in the Southeast Asian region.  The films presented here include an acclaimed documentary about the Indonesian genocide and the newest film from the director of “Uncle Boonmee Who Can Recall His Past Lives.”

Co-directors of this first I-SEA are Viet Le and Ina Adele Ray.  Le is an artist, writer, and curator whose previous credits include curating the “Charlie Don’t Surf” exhibit for Vancouver’s Centre A Gallery and being one of the contributors to the anthology “The Perfume River: Writing From Vietnam.”  Ray is a Vietnamese-American filmmaker, video editor, and educator.  She’s done both commercial and non-profit video editing as well as taught film and media courses at the New School University and Berkeley City College.

That said, here are some of the more intriguing offerings at this inaugural I-SEA:

The live interactive presentation “Ways Of Seeing: People And Places Of Southeast Asia” opens the festival with an inquiry into the nature of Southeast Asian representation.  The media of inquiry are home movies, photographs and footage from the French colonial era, Hollywood movies, and even CIA propaganda.  This live examination will try to tease out from these images understandings and assumptions about the Southeast Asian experience.

Those who missed Joshua Oppenheimer’s incredible documentary “The Look Of Silence” will have another chance to see this amazing companion piece to Oppenheimer’s “The Act Of Killing.”  In it, an optometrist decides to confront the men responsible for killing his brother during the 1965 Indonesian genocide.

Veteran documentarian Arthur Dong recounts the amazing life of a survivor of Cambodia’s notorious genocide in “The Killing Fields Of Dr. Haing S. Ngor.”  Dr. Ngor is best known to American audiences for his Oscar-winning performance as Cambodian photographer Dith Pran in Roland Joffe’s drama “The Killing Fields.”  But Dr. Ngor also used his fame to publicly criticize both Pol Pot’s regime and the later Vietnamese occupation of Cambodia.  Could Dr. Ngor’s activism have led to his untimely (and possibly suspicious) 1996 death?

“Uncle Boonmee Who Can Recall His Past Lives” director Apichatpong Weerasethakul helms “Cemetery Of Splendor,” which mixes myth, magic, and dreams.  Housewife Jenjira works at a clinic for soldiers stricken by a mysterious sleeping sickness.  One of Jenjira’s charges is handsome yet family-less soldier Itt.  Methods ranging from psychic communication to colored light therapy are used to address the soldiers’ mysterious illness.  But could the missing link to the soldiers’ sickness be found in the ancient mythic site lying beneath the clinic?

“The Kalampag Tracking Agency: Experimental Films and Videos From The Philippines (1985-2015)” is a program of “loose parts” gathered from 30 years of little-seen experimental and decomposing Philippine films arranged for maximum emotional effect.

Swann Dubus and Tran Phuong Thao’s documentary “Finding Phong” follows a small town boy named Phong who realizes early on in life that he feels like a girl stuck by mistake in a boy’s body.   When Phong moves to Hanoi to attend university, he soon learns he’s not the only one with this problem.  The film follows Phong’s years of struggle to become a full-fledged girl.

The shorts program “Modern Love Shorts” includes in the five shorts presented the surreal ethnographic documentary “Route 3.”  David Kelley and Patty Chang’s short looks at the socioeconomic effects of a highway which connects China to Thailand through the notorious Golden Triangle.  Another avant-garde short is Ho Tzu Nyen’s “Cloud Of Unknowing.”  The setting is a group of decaying apartments located on Singapore’s outskirts.  Ethereal clouds become unwelcome visitors in the homes of the film’s characters.  The main draw, though, is seeing images from Caravaggio and Magritte visually mix it up with Wen Zhengming’s landscapes.

Masahiro Sugano’s dramatic documentary “Cambodian Son” is a portrait of deported poet Kosal Khiev.  Armed only with memorized verses, Khiev tries to establish himself in a new and strange land while also dealing with the reputation of being Phnom Penh’s premiere poet.

Mattie Do’s horror film “Chanthaly” concerns a lead character who can talk to dead people.  While undergoing treatment for her hereditary heart condition, young Chanthaly sees her mother’s ghost and suspects she’s trying to deliver a message from the afterlife.  The young girl soon finds herself in a situation where she must risk dying from her terminal illness to listen to her mother’s last words.

The “POV: First Person Documentary” program offers four shorts dealing with love, labor, and the sometimes great distance between them.  The short “My Beautiful Resistance” is a portrait of Oakland café owner Penny Baldado.  The owner of Café Gabriela moved to America from The Philippines so she could live as an out lesbian.  Baldado’s hopes to establish a business are hampered by her undocumented immigrant status.  Chao Thao’s pathbreaking short “A Daughter’s Debt” lets three generations of Hmong women talk about women’s issues in contemporary Hmong culture.  These issues include bride purchasing, polygamy, and commodification.