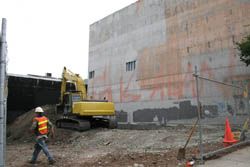 Groundbreaking has begun at 785 Brannan Street, a 56 unit affordable housing project to be built with no public funds. This housing is connected to a market rate project at Fourth and Freelon, and represents a rare opportunity for low-income renters to benefit from the city’s inclusionary housing laws. Such laws primarily help condo buyers earning from $65,000 for singles to $95,000 for families, hardly the San Franciscans most in need of assistance. But despite its cost effectiveness and helping those with lower incomes, the city remains uninterested in replicating the Brannan Street model. Why?

785 Brannan will comprise 56 studio apartments targeted to those earning no more than 40% of median. Unlike other projects, only those who have lived in an SRO for at least one year are eligible for this housing.

The housing, built by developer Joe Cassidy and to be owned by the Tenderloin Housing Clinic, publisher of Beyond Chron, fills a critical gap in city housing needs. It will primarily assist working tenants living in SRO’s who typically cannot afford the $900 monthly rents and $2700 move-in costs for market rate studios. For many, Brannan Street is the next step in their transition from homelessness, to living in an SRO, and now a quality affordable apartment.

One might assume in these tough financial times that a 56 unit affordable apartment built with no public funds would become a model for the future. But this has not proved the case.

Ten years from now, a new generation of San Francisco activists will look back on our current affordable housing policy and wonder how progressives squandered such a great opportunity to use market rate development to create truly affordable housing. The activists of 2015 will not understand why city policy primarily assisted those earning 100% of area median while ignoring the thousands of working families and single adults whose incomes under $95,000 and $65,000 respectively rendered them ineligible for affordability assistance.

The problem is that the city’s inclusionary housing law can be confusing. With developers having multiple ways to comply with the law, and each option impacting different income levels and affordability percentages, it is not clear from looking at the law who actually benefits.

But determining this is actually quite easy: since nearly every market rate project being built in San Francisco is sold as condominiums, only those earning 100% of median can buy the on-site inclusionary units. While the law says that it helps those earning 60% of median, this greater affordability only applies to on-site rental units, which, other than in the proposed rebuild of Trinity Plaza, are virtually nonexistent.

The popular image of low-income working families getting affordable rental housing in market-rate condominium projects is a complete myth.

The chief reason that some affordable housing advocates continue to insist on allowing developers to meet their affordability requirements by selling condos at below market prices to those earning 100% of median is that it allegedly prevents the “ghettoization” of the poor. Ammunition for this argument comes from two recent projects in which downtown developers sought to meet their affordable housing requirements by building housing in Bayview-Hunters Point.

But the reason we have a Planning Commission is ostensibly to prevent off-site housing from being constructed in a poor neighborhood miles away. Meanwhile, no low-income people are living in the newly built downtown or SOMA condos anyway since they do not earn enough to buy an “affordable” unit.

The Brannan housing was triggered by the same rezoning of a market rate project that is currently before the Board of Supervisors regarding Rincon Hill.

In exchange for the market rate project at Fourth and Freelon getting a thirty-five foot height increase, it had to build 15% of the square footage of its market rate project as affordable housing off-site. At Rincon, the rezoning increases heights by over 400 feet, so if the city applied the Brannan formula it would require developers to build a few hundred affordable units.

Far more affordable housing should be built in connection to Rincon than the 506 affordable units (none of which must be newly constructed) that the Redevelopment Agency claims it will fund in Mid-Market.

Brannan Street created the precedent for the Supervisors to achieve a major affordable housing victory at Rincon. We will soon learn whether this opportunity will be realized