SF Arts Initiative: A Raid on Schools, Libraries, and More? 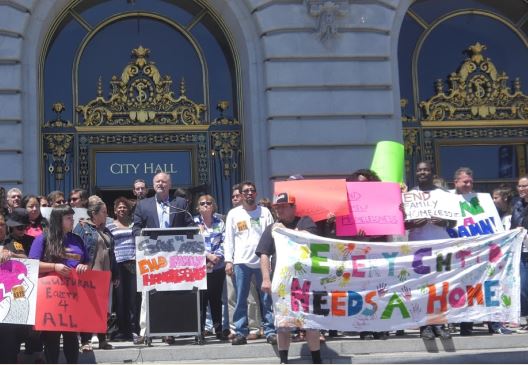 On July 11, a broad coalition organized as San Franciscans for the Arts and Ending Family Homelessness submitted over 16,000 signatures for a November ballot measure to increase funding for both causes. The measure brought widespread acclaim, and a large crowd to the public media event.

According to its sponsors, the initiative “would significantly increase city funding to Grants for the Arts and the Arts Commission, establish the Neighborhood Arts Fund, increase funding for the Cultural Equity Endowment Fund, and create the Ending Family Homelessness Fund to ensure homeless families receive the types of dedicated funding they desperately need.”

And this all happens “without raising any taxes.”

It’s not that the measure is too good to be true; it’s that it has funding the initiative’s text  does not reveal.

In its story on the ballot measure, the SF Chronicle did not even ask what programs currently get the increased funding for the arts and to address family homelessness that the initiative mandates.  That’s a big omission. Because my sources believe the measure will require substantial cuts in funding to libraries, schools, MUNI and children’s services.

For example, the measure would cause an annual $3 million  in library cuts. This would rollback the expanded hours for six neighborhood libraries that were added this year. Schools would also get a $3 million annual cut, while children’s’ services—which overwhelming benefit low-income kids— would take a staggering $8 million annual cut starting next year.

The measure also cuts MUNI’s annual budget by $12 million starting next year. Both Wiener and Kim backed Prop B in November 2014 which shifted $22 million annually to MUNI; now they apparently support giving a chunk of that money to arts groups and to reduce family homelessness.

I am not involved in any program negatively impacted by this proposed shift in funds.  But this measure raises the same concern I had with Prop B: funding priorities are skewed when voters only see where money goes, not where it is taken from. In this case, the money would likely come from libraries, children’s services and schools, three politically popular programs.

Nicole Derse, the campaign spokesperson, disputes that the measure cuts such programs. Derse told me in an email that increases in hotel tax revenue would go to other programs absent the initiative, “But the hotel tax growth has surpassed all expectations.  So any hotel tax revenue that is going to other sources has been significantly more than expected.  The arts have lost out and other entities will not lose out if this initiative passes.”

Derse’s point is that her measure is only taking money  beyond the amount that the hotel tax was projected to reach. The measure mandates that instead of these additional funds going to libraries, children’s services, schools and MUNI, they go to arts groups and to address family homelessness.

San Francisco voters need a full understanding of this measure before the endorsement process begins. I look forward to other media checking with the Board’s Budget Analyst Harvey Rose, the Controller’s Office, and the Mayor’s Budget office for their take on the funding implications of this initiative.

If these experts conclude that concern about funding cuts to vital programs is misplaced, and the initiative is as great as its backers believe it is, wonderful. But if the cuts I’ve heard about are true, then the backers of the initiative should be upfront about this with voters.