Inequality Up, Equality Down 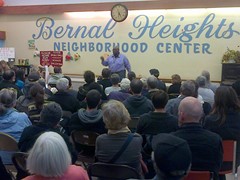 Joined by groups such as Jobs With Justice, AFT 2121, California Faculty Association, Peralta Federation of Teachers, SEIU 1021, the CCSF Student Labor Action Project (SLAP), ACCE Action and many others, the ReFund California coalition is taking action in response to the growing cost of higher education, the increase in student debt, and the overall decline in funding for core public services.

At the same time, student debt is going through the roof. Guess which bank is one of the largest holders of student loans? Wells Fargo.

Today, a report called “Wall Street and California’s Student Debt Crisis,” has been released by the Center on Culture, Organizations, and Politics at UC Berkeley’s Institute for Research on Labor and Employment. To compensate for lost state funding, public colleges and universities have not only increased tuition and fees, but have also increased their own debt financing. The annual cost of interest payments to Wall Street for California UC’s, CSU’s, and Community Colleges has reached some $1 billion dollars – a dramatic annual increase in debt servicing fees.

The economic crisis coupled with Proposition 13, the toxic 1970s ballot measure that requires a supermajority in the legislature or a ballot measure to raise property taxes, has led to a divestment in public education and vital services. Prop 13 is riddled with corporate loopholes that major corporations lobby to keep. This further damages the health of the state budget.

In response to this crisis, students, teachers, staff, and community groups with ReFund CA have launched a campaign to end corporatization and privatization, and reinvest in our public education systems.

The launch of the day of action came on Monday with a speak-out against divestment and increasing privatization in public higher education as part of Campus Equity Week. Joined by California Faculty Association President Lillian Taiz, faculty, students and staff shared their struggles with increasing debt, crushing workloads and fewer resources. Community members from Jobs with Justice, AFT2121, and ACCE spoke about the difficulty of keeping kids in college as the economy stagnates and tuition continually rises, while others addressed the lack of resources in K-12 education.

Monday evening, nearly 100 community members from the Mission District and Bernal Heights gathered at a Town Hall meeting to address the housing crisis and stop displacement. A number of people in attendance said they were facing eviction. Supervisor David Campos helped residents understand how terrible Propositions B and C will be if passed–as a precedent for even more luxury housing instead of housing for the rest of us.
30 year Bernal resident Deborah Gerson commented, “Prop B and C would give a green light to developers like Golden Gateway, the lead financial backer for 8 Washington, which is planning to build 134 luxury units – with NO on site affordable housing – when they haven’t paid over $20million in taxes.. We need more affordable housing, not multi-million dollar condos.”

California faces many challenges to funding vital services, stemming foreclosures, and regaining its role as an economic leader in the country. However, corporations like Wells Fargo, Pimco and Blackrock continue to spend their profits to stop key legislation and model programs that would move the state forward.

With a known reputation and a long history of tax dodging, predatory lending, and continued role in the California foreclosure crisis, Wells Fargo has been the center of numerous protests over the last few years. On Tuesday, activists shut down the West Coast headquarters of Wells Fargo to release a report entitled “Wells Fargo Spreads Cash, Our Communities Lose: How Wells Fargo’s Political Spending Harms California Communities” published by ACCE Institute and Public Campaign.

While California’s fiscal challenge to fund essential services and programs continue, Wells Fargo continues to enjoy record profits. Wells Fargo has refused to pay their fair share and actively fights to stop progressive taxes and policies to fix our economy.

This year, in the 2013 legislative session, Wells Fargo actively lobbied against Change of Commercial Property Ownership legislation (AB 188 sponsored by Assemblymember Ammiano). The legislation would have raised tens of millions of dollars in new revenue for the state. Wells Fargo’s campaign contributions to state legislators on key committees contributed to the legislation’s defeat. The Housing and Jobs Act legislation, which would have created living wage jobs and built more affordable housing, faced a similar fate. These are two examples of legislation that would benefit consumers that died or stalled because of the significant help of Wells Fargo lobbyists and political donations. To find out more about how Wells Fargo is influencing policy and politicians, visit http://publicampaign.org/reports/wellsfargo

On Oct 30th, in 8 cities across the Country, hundreds of homeowners and community supporters protested the offices of giant money managers Pimco and BlackRock. These actions are a part of an escalating campaign to fight for local principal reduction programs in Richmond, California and numerous other cities across the country.

In each city, protesters disrupted business at Blackrock and Pimoc locations until they met with senior officials about their attempts to intimidate cities considering local principal reduction programs, including the potential use of eminent domain. Both Pimco and BlackRock unsuccessfully sued the city of Richmond over its proposal and local principal reduction program CARES (Community Action to Restore Equity & Stability).

Blackrock and Pimco have been central firms at the heart of the financial crisis. Like other Wall Street entities, BlackRock and Pimco both have been charged with various kinds of wrongdoing in the fallout from the housing crash, including fraud and failing to adequately protect clients.

Stopping Privatization and Investing In Institutions Essential for our Economic Recovery

CCSF is one of the largest community colleges in the country, servicing more than 80,000 students and generating revenues of $300 million a year to SF. CCSF is a vital institution for San Francisco that provides irreplaceable and affordable pathways for many, including:

Join Activist Today, Halloween, Thursday, October 31st, 3:30 pm. at CCSF’s Civic Center campus (750 Eddy St. near Polk). There will a march to and rally at city hall where we will deliver postcards to Mayor Lee demanding that he keeps his priority’s straight: Keep City College Open!!!
Costumes are encouraged for the “San Francisco Would be Spooky without Our City College” protest and rally.

The ReFund coalition will continue to build public and political support for holding big corporations accountable. We are demanding that corporations and politicians help make higher education affordable by:

1) Raising revenue by closing the loopholes in the assessment of commercial property taxes as one policy needed to reform Proposition 13.

4) Stopping privatizing of public education with private online companies and the contracting out of employees, and instead investing in the staff of our public institutions

To get involved, please visit us at www.refundcalifornia.org