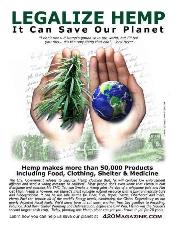 Legislation that allows California farmers to be prepared to grow industrial hemp upon federal approval has cleared the Assembly. SB 566, authored by Senator Mark Leno, would permit growers in the Golden State to cultivate industrial hemp for the sale of seed, oil and fiber to manufacturers and businesses that currently rely on international imports for raw hemp products. The bill, which is co-authored by Assemblymember Allan Monsoor, R-Costa Mesa, and has received strong bipartisan support in both houses, would go into effect once the federal government lifts its ban on hemp cultivation.

“In the past year, the conversation to legalize the cultivation of hemp has gained momentum at the federal level, and it is only a matter of time before a farmer’s right to grow hemp is restored,” said Senator Leno, D-San Francisco. “Industrial hemp, which is already found in hundreds of consumer products manufactured in our state, is a perfect crop for California. It has great potential to revitalize family farms, create new jobs and stimulate the economy.”

Earlier this year, two separate bills allowing states to regulate industrial hemp cultivation were introduced in Congress, continuing the national debate on whether the hemp ban should remain in place. In addition, the U.S. House of Representatives passed a provision in the Farm Bill that would have allowed colleges and universities to grow hemp for research in states where hemp production is allowed.

Sen. Leno’s California Industrial Hemp Farming Act puts into place the framework needed for hemp cultivation to occur in California immediately following federal approval. Enforcement and oversight of hemp production would be conducted in concert with the California Department of Food and Agriculture (CDFA) and county agricultural commissioners, as is done with other crops.

“SB 566 demonstrates the real momentum behind the national movement to legalize industrial hemp,” said Eric Steenstra, Executive Director of the Hemp Industries Association. “With Congressional bills to legalize hemp currently in both the House and Senate, California is on the cutting edge, pushing forward with an industrial hemp law that would not only stimulate much needed growth in local business and farming sectors, but ultimately lead the nation toward a federal policy change that would open hemp cultivation to hemp farmers around the country. This will lower our dependence on Canada and China for hemp imports, and empower our agrarian and manufacturing economies to finally tap into one of the fastest growing natural products in the market.”

Hemp has a deep history in the U.S. The Nina, Pinta and Santa Maria crossed the Atlantic with sails made of hemp, and both Thomas Jefferson and George Washington grew hemp, which was legal tender until the early 1800s. Today, industrial hemp is used to manufacture thousands of food, clothing, personal care products and building materials. The nation’s hemp market is currently valued at $500 million annually, and more than 50% of the nation’s hemp product companies are based in California.

“Hemp grown right here in California would stimulate massive growth in the food, body care, textiles, building and other crucial sectors that suffer from having to import less efficient materials in lieu of this lucrative industrial crop,” says David Bronner, President of Dr. Bronner’s Magic Soaps. “The nationwide movement to legalize industrial hemp and farm it right here in the US to benefit American business is growing, and SB 566 will open a door to incredible opportunity for farmers who seek sustainable agriculture, ecologically responsible businesses and products. Ultimately, this bill will help end the prohibition on what is one of the most versatile and environmentally revolutionary industrial crops on the planet.”

SB 566 returns to the Senate for a concurrence vote before heading to Governor Jerry Brown’s desk.