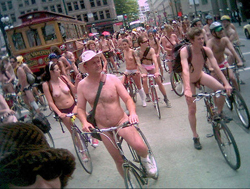 Nolo.com, a source for all things legal, defines it in the following way: “Revealing one’s genitals under circumstances likely to offend others. Exposure is indecent under the law whenever a reasonable person would or should know that his act may be seen by others–for example, in a public place or through an open window–and that it is likely to cause affront or alarm.”

There’s the priest in Colorado who was caught jogging in the wee (and very dark) hours of the morning totally nude. His defense: He sweats too much when he wears clothes. Then there’s the guys who were driving in a van in Orange County exposing themselves. No doubt under the influence of something wonderful. And the report of a kid on a school bus in Harrisburg, Pennsylvania. Forget calling in the social workers: Kids will be kids.

It’s all very troubling. Not because people are doing what comes naturally (and I do think nudity and even showing off our genitals is as natural as wanting to be the first in line), but because the cops and the legal system spend countless hours pursuing those types of cases.

There was a time when bikinis were considered indecent exposure. Even the sight of a man with a bare chest was enough to stir up the ire of the self-appointed protectors of American decency. Grown men and women actually sat around discussing whether or not Liz Taylor’s cleavage was “morally objectionable.”

As long as someone isn’t using a body part to rape or injure someone else, why should anyone care if those same parts are hanging out in the wind catching a few rays? Or if some guys in a van drive by wearing nothing but their birthday suits? Certainly some priest doing his morning run in the buff isn’t threatening to our social order.

The way I see it, there’s always going to be someone offended by anything we do. Some people get apoplectic over the sight of a mother breast feeding her child in public.

As for those pesky guys in trench coats who like to surprise people on the streets, well, I know a better solution than calling the cops. Either enjoy the sight (if you’re so inclined) or do as I did when I was a young drag queen hanging out on the streets of the gay ghetto in Philly in the early 70s.

A man approached me and proceeded to show me his family jewels, expecting no doubt that I would either recoil in horror or immediately want to pull a Monica Lewinsky.

I looked at what he was displaying and said in my best Bette Midler voice, “Honey, you got shortchanged. I’d ask for a refund.”

The guy quickly zipped up and walked away.

Tommi Avicolli Mecca is a radical Italian queer performer and writer whose work can be seen at www.avicollimecca.com