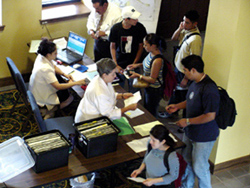 (Ed note: While many reasons have been given for the huge increased voter turnout on Nov. 7—Iraq, anti-gay marriage initiatives etc—this piece shows that increased voter mobilization efforts may have been the greatest factor. Delattre is the National Coordinator of the Student PIRGS)

I’ve spent the last few days pouring over Election Day returns and have been marveling at the astounding youth turnout numbers. The increase in youth voter turnout this week was four times the rate of the general population’s increase (4 percentage points for youth, 1 percentage point overall). On top of that, an analysis of 36 student-dense precincts where the nonpartisan Student PIRGs’ New Voters Project—which worked on 80 campuses— conducted voter registration and Get Out the Vote work found that the rate of turnout in those precincts was six times that of young adults overall. In other words, youth voter turnout surged this week, and at college campuses where our amazing network of student leaders and professional organizers were active, the turnout increase was even higher. So what happened, and what lessons can we learn from all of this?

The goal of the nonpartisan Student PIRGs’ New Voters Project is to boost youth participation in the political process. We’re convinced that if we boost participation rates enough, candidates will begin focusing their campaign resources on young people (which they largely ignore now), which will in turn drive youth turnout upward as young people begin to perceive politics and politicians to be relevant and responsive to their concerns. Our strategy is to rely largely on the same basics as political campaigns: peer-to-peer voter registration drives followed up with face-to-face and over the phone Get Out the Vote efforts. This strategy has been validated in recent years thanks to the excellent research of social scientists such as Donald Green at Yale University, who has found that personalized, peer-to-peer phone and face-to-face voter reminders before an election increase voter turnout by between 5 and 10 percentage points.

Our hardworking coalition partners and incredible student leaders, backed up by a very talented fleet of campus organizers, registered 75,000 students to vote this fall, exceeding our of 70,000. In the last two weeks, these same folks made 94,000 personalized Get Out the Vote reminders either over the phone or face-to-face, including 50,000 contacts on Monday and Tuesday alone.

Going into this election, we wanted to measure the effects of our impact. To do so, we designed an analysis with the Center for Information and Research on Civic Learning and Engagement (CIRCLE) that measured the turnout increase between 2002 and 2006 in student-dense precincts where we and other partners focused our efforts. The analysis focused on a set of 36 precincts in Ohio, Connecticut, Iowa, Colorado, and Michigan and found that average turnout in those precincts increased by 157% over 2002.

This increase is six times the national average increase of ballots cast by youth voters (which was 25%, according to a separate exit poll analysis conducted by CIRCLE). The complete chart of precincts studied can be found at www.NewVotersProject.org.

Several precincts included in the CIRCLE study have shown additional increases since the initial numbers were generated. Additionally, precincts in Wisconsin and Maryland—which were collected after the initial analysis—mirror the trend. For example, all thirteen student-heavy wards at the University of Wisconsin Madison posted increases, with turnout at three wards (42, 46, 60) doubling.

Those are the numbers. But numbers alone don’t do justice to the creativity, innovation and determination that the student volunteers and Student PIRGs’ New Voters Project staff put into this effort. For example:

• The “Party at the Polls” hosted by students at the University of Colorado Denver came in handy after a two and a half hour line formed at the polls. While a DJ entertained the students, CoPIRG Student Chapters, the Board of Regents and the student government helped raise $500 in two hours to buy food for the waiting students. Two and a half hours after the polls were supposed to close, there were still seven students waiting to vote.

• In Los Angeles, students at the community colleges and local state universities ran a historic drive to turn out students to vote, making over 22,000 Get Out the Vote contacts by the end of Tuesday, with 750 students signing up to volunteer in the week before the election. This success was due to an incredible collaboration between students, faculty and administrators. At California State University-Long Beach, for example, a Political Science professor allowed the Student PIRGs’ New Voters Project staff and volunteers to train her students on how to mobilize their peers to vote by asking students to sign a pledge to vote card. After the five- minute training, more than forty students spread out around campus and gathered approximately 200 pledge to vote cards in forty minutes.

Our work has taught us two lessons. First, old-fashioned shoe leather works. The methods we employed were not rocket science; we relied on the same basic playbook as any competent political campaign. Though peer-to-peer contact is not as flashy as the Internet (which we also utilized extensively) and not as glamorous as Facebook (which we used as well), there’s nothing that’s been proven to work better.

Second, and equally important, we must invest in youth-based organizing year-round – not just during election season. Of the 80 campuses the Student PIRGs’ New Voters Project worked at, 60 were schools with permanently funded PIRG chapters that have a year-round, professionally-staffed political engagement program. It’s not shocking that, pound for pound, the campuses with PIRG chapters performed better and had more invested student leadership. What’s more, student volunteers at these schools have the benefit of continuing to work closely with the student leadership after the election on a number of key youth issues, such as stopping global warming, increasing higher education funding, and combating hunger and homelessness.

The Student PIRGs also plan to continue working at the 20 or so campuses where we ran the project this fall that currently do not have PIRG chapters – with a goal of establishing a permanently funded PIRG program at between 10 and 15 of those schools in states such as Iowa, New Hampshire, South Carolina, New Mexico, and Arizona.

After raising youth voting in 2006, we are really enthusiastic about increasing turnout even further in 2008.