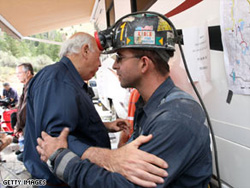 A week before the August 6 Utah mining disaster that has left six miners trapped and likely dead, Billy Wilder’s classic 1951 film, “Ace in the Hole” was released on DVD. Wilder’s movie portrays a down on his luck newspaperman seeking to make the big time by publicizing the plight of a man trapped inside a mountain by a cave-in. The reporter predicts that Americans will become obsessed with the story, which they do. But the framing of the story around one individual’s sad plight leads them to ignore more important issues—as has now occurred in the real media world, as the Utah mine owner’s history of safety violations, and the Bush Administration’s opposition to tough mine safety laws, becomes a sidebar to the human tragedy.

The almost certain death of six miners trapped since August 6 should have raised a national debate about the industry’s unnecessarily high fatality rate. But as director Billy Wilder showed over fifty years ago, the media is more concerned with extracting emotion over the trapped miners than with demanding answers from government officials.

Early in Wilder’s “Ace in the Hole,” veteran reporter Kirk Douglas tells a young colleague that nothing grabs the public more than a mine cave-in. When he comes across an Indian artifacts hunter trapped by a cave-in, Douglas sees breaking the story as his chance to get out of New Mexico and back on top of the New York City newspaper world.

Unfortunately, the movie’s key plot device—-Douglas convinces the locals that they should use a method that takes a week to get the man out rather than a day, as that will give him a week of national headlines—runs into problems as the film continues. But among Wilder’s essential messages is how the local corruption responsible for the delayed recovery effort is ignored amidst the public hullabaloo—which even includes the opening of a huge carnival at the site of the cave-in.

Editors at CNN clearly agree with Douglas’ assessment, as they have kept viewers updated almost hourly on the Utah miners plight. But it took considerable time for the traditional media to get to the real story—which is the Bush Administration’s turning over control of the Mine Safety and Health Administration to mine owners.

As reported by West Virginia Public Radio, the Utah mine owner, Robert Murray, threatened to have MSHA inspectors fired when an Ohio mine he owned was cited for safety violations. He told Tim Thompson, then the head of MSHA’s District 3 office that covers a portion of Ohio and northern West Virginia, “I will have your jobs. They are gone. The clock is ticking.”

And Murray also stated, “I talked to Laresky (former MSHA director) personally,” and “Mitch McConnell calls me one of the five finest men in America, and last I checked he was sleeping with your boss.” Senate Minority Leader McConnell is married to Labor Secretary Elaine Chao, who oversees MSHA.

Murray even bragged about getting 2 inspectors demoted, and said that “if Thompson doesn’t get his ass in gear, I’ll put him in my sites, too.”

I wonder why this angle of the story has not gotten wider media attention. As in Wilder’s film, the media has used the pathos of the victim’s plight to ignore those responsible.

Murray’s other mines have racked thousands of violations and millions of dollars in fines. According to the Salt Lake Tribune, Murray’s Galatia mine in southern Illinois racked up at least 2,787 violations and more than $2.4 million in proposed fines from the Mine Safety and Health Administration over a two-year span, according to government records. That includes more than $1.4 million in proposed fines already this year.

How does Murray get away with it? Same way Enron did—by donating thousands of dollars to the Republican Party. And Mitch McConnell has received $176,800 from mining interests since 2001:

Murray has personally donated $115,050 to Republican political candidates over the past three election cycles. He has given another $724,500 to the GOP over the past ten years through political action committees connected to his businesses.

Again from the Salt Lake Tribune:

The memo indicates that mine operators knew the tremendous pressures of a mountain bearing down on the mine were creating problems with the roof, and they were searching for a way to safely keep the mine from falling in as they cut away the coal pillars supporting the structure.

“It’s dangerous. Damn dangerous I would say,” said Robert Ferriter, now director of the mine safety program at the Colorado School of Mines and a 27-year veteran of the Mine Safety and Health Administration. “What is MSHA doing in all this? They’re the ones who are supposed to catch this sort of thing.”

Wilder’s 1951 film argues that the media’s pressure for sensationalism ignores more important stories, and that the demands of its coverage itself shapes the news. Had “Ace in the Hole” not gone well beyond the realm of believability in the film’s last third, it would be widely known as a great movie classic.