In South Carolina, Be a Christian or Else! 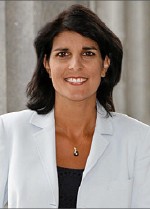 Arizona may well be the great shame of the nation with its new anti-immigrant law that hopefully the U.S. State Department will soon be challenging in court, but South Carolina now joins the ranks of states that decent Americans should wish were not part of our country. At least not the Republican part of the state.

The reason? GOP voters in “The Palmetto State” are about to choose their candidate for governor. A leading contender is a right-wing woman of color endorsed by Sarah Palin, who is being bombarded with questions about her religion. (Ed. Note: Haley won the primary last night, after Tommi submitted this article to us.)

She is Minrata Nikki Randhawa Haley, the daughter of Indian immigrants. Her campaign prefers “Nikki Haley,” and has blasted reporters who use her real name. But the problem is not just that her given name does not sound white. Though Haley converted from her family’s Sikh faith to Christianity and has embraced bad old conservative Republican values, some right-wing Christian voters still aren’t buying that she’s one of them.

Haley’s religion, and not war, poverty or the failing economy, has become the major issue in her bid for the nomination. In a country that doesn’t have an established religion and claims to be about separation of church and state, you’d think its citizens would comprehend that a candidate’s religion is no more relevant to her ability to govern than what perfume she wears.

South Carolina GOP voters have been obsessing about her religion so much that her campaign even posted a webpage: “Question: Is Nikki a Christian?” The answer should be: “Who the hell cares?!”

In addition to being grilled about her commitment to her newfound religion, Haley has been forced to talk about the Civil War. You read that right. The Civil War.

The question came from a group called Palmetto Patriots, which purports to “fight attacks against Southern Culture” (culture as in slavery, segregation and Jim Crow?) and certify that candidates are in “compliance with conservative values” (as in hating queers, blacks, Mexicans and Jews?).

The group wanted to know what Haley believed caused the Civil War, which appears to be a bone of contention with Southerners. I won’t go into the details. Suffice it to say that they don’t like the phrase “freeing the slaves.” And Nikki didn’t mention it.

One member of the group, Robert Slimp, who is a pastor, explained that none of the other candidates were questioned about the Civil War, because “all of them are Southerners whose families go back to beyond the war between the states, back to antebellum times, and they have a deeper appreciation of Southern thinking and mentality.”