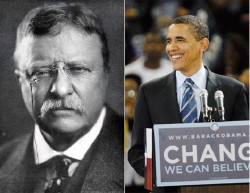 Is there a headline more menacing to liberals, moderates, consumers, small-business owners or free-marketeers than “Banks ‘Too Big To Fail’ Have Grown Even Bigger, Three Banks Issue Half the Mortgages & 2/3s of Credit Cards – Behemoths Born of the Bailout Reduce Consumer Choice”? Shouldn’t any jumbo, “too big to fail” money center be deemed a peril to western civilization, let alone fair competition?

Is our government, that watchdog against illegal monopolies, stuffing behemoths, like fattened geese, concentrating capital beyond dreams of avarice? Oligarchy, cousin to plutocracy, here we come, except now it’s the historic guardians feeding new Trusts, evoking infamous, lawless consolidations that allowed predatory Robber Barons to command markets. With fewer hands on the money spigot, we desperately need another Teddy Roosevelt the Trustbuster. Don’t hold your breath, not with Obama the Wary in charge.

So, how’s your liberal “trust quotient” these days – in the president, government, socialized capitalism, retirement, indeed ourselves? Less now than in January, I bet, when the Obama glow – that marvelous antidote to Bush depression and cynicism – shined. Why, I look back with fond nostalgia, keen to replenish the feel-good days of long ago 2008. That buoyancy, riding dreams of reform and justice against terrorists inside the gates, got damped down with alacrity. Obama’s breakthrough skin color is fading in importance, as he magically turns bluer and bluer. That happens from palling around with elitists.

Hyperbole, you cry! Satire, provocation! Isn’t this guy the rightwing fringe’s “most liberal senator,” nay, for lunatics, an incorrigible “socialist”? Four names buttress my Blue Dog appellation: Rahm Emanuel, top Blue Dogger, Arlen Specter, Kirsten Gillibrand, and the Geither-Summers-Bernanke Trio. Okay, I fudged the last, but tell me this: why, knowing Al Franken would come aboard, did President Obama embarrass himself, slobbering over the unreliable Specter, actively squelching primary challengers? Likewise, why did the White House muscle in, forbidding Democratic foes against appointed NY Senator Gillibrand, that right-leaning Blue Dog? So much for empowering voters and primaries, the engine that made Obama.

Further, why hasn’t the White House once chastised Blue Dogs as it does the “left of the left,” mysteriously shocked at liberal fury about its fudging on the public option? Among the shrewdest bloggers, Glenn Greenwald targets Obama staffers for doing …

… nothing to change the behavior of the supposedly obstructionist Blue Dogs and centrists whom Obama-defenders are eager to blame for the health care standstill. In fact, they’ve done the opposite: Emanuel has repeatedly leapt to their defense and attacked progressives . . . [and threats] “you’ll never hear from us again” are issued to defiant progressives only . . . to protect those ostensible obstructionists and further entrench them in power.

Without trust, sustaining “belief in the system,” what badly-broken democracy can redeem itself? Yet trust depends on some correlation between political statement and performance, on shared values, not repeated bait and switch. Let us not alone stigmatize one president, beset with dismal party cronies, nor obsess over blunders (Wall Street subsidy, surge in Afghanistan, disastrous health reform rollout). Obama is superior to the dolt and the darkness he replaced, and the nightmare of the McCain-Palin gang in power brings on apoplexy. What’s demoralizing about Obama after eight months is the magnitude and dogged consistency by which he reinforces the status quo, in appointments and decisions, across military, political and economic interests. To paraphrase Eldridge Cleaver’s line, those not part of the solution become part of the problem?

Simple test: Name one significant change for the better since January, or one liberal idea or program enthusiastically pursued. Name any progressive risk taking. Name one administration decision that delights you. Certainly, Sonia Sotomajor’s a decent pick, though hardly the liberal genius to offset heavyweight reactionaries in Scalia, Alito, and Roberts. And, as with torture, the world hasn’t moved.

Had Obama’s pitch been, “elect a nice, soft-spoken, articulate CEO who won’t rock boats,” he never leaves the starting gate. Had Obama sold himself as “not as bad as right-wing grandpa and history’s worst V.P. pick,” would he have won such laurels? Had Obama conveyed his rollover, non-negotiating mentality, happy with any part of the loaf, would he have escaped the Senate?

Alienate the Base – Say What?

Obama’s election marvel, like any addictive, hope-driven potion in desperate times, is wearing off, with nary a replacement. There’s mounting disgust on the left, even disillusionment we’ll ever find electable reform leaders with a touch of independence, courage, and wisdom. Instead, judging by Obama health reform, many dread fast food legislation that dupes taste buds but leaves the nation famished for reform.

To end with more cheerful commentary, “Squandered Honeymoon: How Botched Bailouts Hamper Healthcare Reform,” brilliant New Deal researcher Rob Johnson laments Obama’s decision to bypass the base “he inspired to elect him” for special interest groups: “Our president is now in a place, as Martha Reeves once sang, with Nowhere to Run and Nowhere to Hide. Having fumbled on finance, Obama has to show the American people why we elected him, or be at risk of losing his job . . . Now it will be harder for him to inspire all of us.”

Is this how a bright president, a masterly campaigner, envisions greatness – slighting his base while palling around with mediocrity? If so, hard-won trust will be squandered and excruciating crises wasted. The liberal base will eventually have little “public option” but opposition, not alliance. That avoidable double whammy – a party at odds with itself – induces one fiasco that escaped the Bush-Cheney train wreck: Democrats snatching defeat from their own rare electoral victories.