In Alabama: Sell Guns, Not Dildoes! 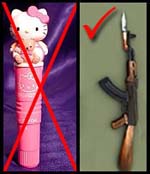 Here’s one for the “stranger than fiction” department: Stand on any street corner in Alabama selling guns and dildoes, and guess which one can land you in jail for a year? You got it: Those deadly dildoes!

In a unanimous decision, the three judges of the 11th Circuit Court of Appeals on February 16th upheld a 1998 Alabama statute that outlaws the sale of devices used to stimulate human genitals. Instruments to blow out someone’s brains are perfectly fine. Sounds about right for a state with a rich history of slavery, lynchings and beatings of civil rights activists.

Here’s the clincher. According to the court and the Alabama Attorney General’s Office, it’s all about morality. Wrote the judges: “States have traditionally had the authority to regulate commercial activity they deem harmful to the public.” How is selling dildoes to adults “harmful to the public?”

Dildoes existed in every human culture. In ancient Greece, they were used with olive oil as a lubricant. Polynesian and Arab cultures didn’t bother manufacturing them: They went au natural with unripened bananas. Celtic women did a fertility dance beneath the moon using broomsticks to pleasure themselves. In ancient Egypt women used the statue of Amon-Ra to improve their chances of having children. Some Medieval women did the same thing with the wooden likenesses of “St. Priapus.”

Maybe the three judges of the 11th Circuit Court should heed the old adage: Don’t knock it unless you’ve tried it.

Tommi Avicolli Mecca is a radical, atheist, southern Italian, working-class queer performer, activist and writer whose work can be seen at www.avicollimecca.com.