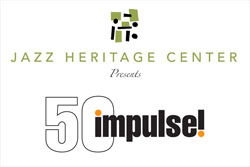 Impulse! Records, a label synonymous with some of the greatest names in jazz, celebrates its 50th Anniversary with an exhibit at San Francisco’s Jazz Heritage Center’s Lush Life Gallery. This exhibition celebrates the 50th anniversary of Impulse with iconic album covers and images of musical history’s giants captured by Chuck Stewart’s camera that tell the label’s story as vividly as its music does. I was amazed at the album covers and photographs in this exhibit; from drummers Art Blakey, Chico Hamilton and Max Roach, to vocalist Shirley Horn and of course, John Coltrane, perhaps Impulse’s most famous artist.

From the very beginning, artwork was a major component in the identity of Impulse Records. When producer Creed Taylor laid out his vision for the label in late 1960, before any records had been released, he set a visual standard to match the music: laminated gatefold covers rich in colorful graphic design, distinctive typography and magnificent photography. The label launched in early 1961 with its own slogan: “The New Wave Of Jazz Is On Impulse!” Creed Taylor and his successor Bob Thiele fulfilled that promise in a variety of musical directions. Albums with well-defined concepts and cutting edge music were the label’s forte.

The exhibit will run from September 29th to October 23rd. The Jazz Heritage Center located in the famed Fillmore District of San Francisco with it’s own lauded musical history has been opened since 2007 and has hosted many fine exhibitions, most recently the very successful ‘ Presenting Bill Graham’ exhibit which was extended several times due to overwhelming demand.

If you enjoyed last year’s Herman Leonard photography exhibit at the JHC, you will love this one. A jazz lover’s delight and a stroll down memory lane, filled with iconic covers and photos of one of the greatest eras in jazz.