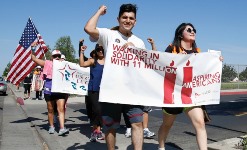 Opponents of a path to citizenship for illegal immigrants had a plan to apply grassroots pressure on congressional Republicans in their home districts. Why did it fizzle?

Activists opposed to immigration reform were all set to spend this month putting pressure on lawmakers to kill the legislation. But it hasn’t exactly been a show of force.

Last week, the Tea Party Patriots and NumbersUSA, two groups opposed to “amnesty” legislation, heavily publicized a rally in Richmond, Virginia, featuring Steve King, the firebrand Republican congressman who recently claimed most undocumented youth are physically fit drug mules. But only a few dozen people showed up — far short of the hundreds organizers had planned for.

Journalists posted photos of a lonely-looking King under a gazebo in a mostly empty public park. A reporter for Breitbart News, Matthew Boyle, tweeted, “If grassroots wants to kill #Amnesty they have to show up. #teaparty they are not here in Richmond.”

Activists on both sides of the immigration debate had put heavy emphasis on the importance of flexing grassroots muscle during this month of congressional recess. The idea is to show Republicans in the House of Representatives, which hasn’t settled on a path forward on the issue, where the most passionate support lies. And as August winds down, the Richmond event seems indicative of the overall trend. Hundreds of immigrant advocates have appeared at rallies and town halls across the country. But the other side, the opponents, have been mostly absent.

Hundreds of reform advocates recently rallied at the Bakersfield, California, office of Rep. Kevin McCarthy, the House GOP whip. (A local television station put the number at “more than 1,000”; Breitbart reported it was about 400, mostly “Mexican in origin,” and noted the presence of “about two dozen counter-demonstrators.”) More than 500 pro-reform activists, including the mayor of Springfield, Ohio, and local clergy, showed up at Speaker John Boehner’s district office. The Washington Times counted about 60 pro-reform activists calling on Rep. Frank Wolf in Herndon, Virginia. They marched through the streets of Asheboro, North Carolina, and gathered alongside the Catholic diocese in Salt Lake City. In Corpus Christi, Texas, a Republican congressman, Blake Farenthold, took to Twitter to beseech opponents to show up and counter the 10,000 pro-reform petitions that activists delivered to his office.

Anti-immigration-reform groups were hard pressed to come up with evidence of similar grassroots fervor for their side. Indeed, many of the examples they cited seemed to show the opposite. A NumbersUSA organizer passed along footage from a town hall where Kansas Rep. Lynn Jenkins was asked repeatedly about immigration; all the questioners in the clip are pro-reform, but booing rumbles through the crowd as they speak. At a town hall for Rep. Karen Bass, the California Democrat is asked about an unrelated piece of legislation that would deport “illegal alien gang members” (and explains why she opposes it). In Elkhorn, Nebraska, Republican Lee Terry is asked, “Will we see a path to citizenship in the immigration bill?” as DREAM Act activists are shown in a local television report.

Anti-reform groups appear to be canceling events for lack of participation. The Tea Party Patriots once boasted of summer rallies in Harrisburg, Pennsylvania; Dallas; and South Carolina, but they’ve disappeared from the calendar on the group’s website. Another anti-immigration-reform group, the Black American Leadership Alliance, had planned a nine-city “We Are America Tour,” but had to drop half the stops. “Dear friends, it is with deep regret that I must inform you all that we had to drop several rallies,” an organizer wrote on Facebook, in a post that has since been removed but was spotted and preserved by the pro-reform group America’s Voice. “We were unable to get organizers for the following: Miami, FL., Chicago, IL., Roanoke, VA., and Wisconsin. The Ohio rally is still going to happen, but not under the “Tour” title. FAIR is leading that rally. That leaves us with 4 rallies. Phoenix, AZ. Richmond, VA. And rallies in Houston, and Dallas, TX. Even the rallies in Houston, and Richmond, VA, are not completely confirmed at this time.”

FAIR stands for the Federation for American Immigration Reform, a Washington-based group that opposes legal and illegal immigration. In a Washington Post article last week, the group’s communications director acknowledged being outgunned by activists for the other side. “It’s a staggering, well-financed hard push by the left and the right,” Bob Dane told the Post.

A Black American Leadership Alliance representative was unavailable for comment. The Tea Party Patriots’ national coordinator, Jenny Beth Martin, told me the disappearing rallies were not “set in stone,” so their listings were removed until they could be finalized. Martin also told ABC News that Tea Party activists are more focused on the push to defund Obamacare than on defeating immigration reform. Roy Beck, the executive director of NumbersUSA, which claims to be the largest grassroots group against citizenship for undocumented immigrants, previously told me his group was gearing up for a major August mobilization, but in an interview Monday he denied that was ever the goal. “We did not try to organize anything massive,” he said.

NumbersUSA has alerted its members to 181 past events, with 70 more scheduled for this week and 142 still to come, involving more than 100 Republican members of Congress. Members have reported back to the group that they felt they were in the majority at 90 percent of the events, Beck told me, based on the way the audience rumbled and booed.

As for the poorly attended Richmond rally, Beck acknowledged it was disappointing, but blamed the lack of turnout on a bad location choice. “We picked a spot that, it turns out, has the highest homicide rate in the city, and apparently a lot of people were afraid to come,” he said. Beck seemed to associate this danger with the African-American population: “We wanted to be there at a place where we could talk about the huge population of descendants of slavery who have never yet been part of the American Dream,” he said. “But sometimes passion and principles get in the way of practicality.”

Beck admitted that his side is not as galvanized as activists were in May of 2007, when an outpouring of grassroots anger — directed by NumbersUSA — helped derail the last immigration-reform push. But that’s because reform has less chance of passing this time, so activists are less concerned, he said. “This year, it’s very much like there’s a wildfire out there coming for your town, but everybody knows there’s a reservoir between the fire and your town, and that’s the House of Representatives,” he said. “Everybody has been told by the media the bill is dead on arrival in the House.”

In any case, Beck said, all the rallies in the world won’t do reform advocates any good if Republican members of Congress aren’t taking positions in favor of reform, and that’s not happening in a major way. McCarthy said he was for a piecemeal approach, with border security coming first. Tennessee Rep. Scott DesJarlais, confronted by an 11-year-old girl whose father faces deportation, told her it was brave of her to speak, but “we have laws, and we need to follow those laws,” to applause from the audience. Virginia Rep. Bob Goodlatte, who as chairman of the Judiciary Committee is something of a gatekeeper for immigration policy, reiterated that he does not believe the undocumented should get a “special pathway to citizenship” not available to would-be legal immigrants.

“August is so much more important to the pro-[comprehensive immigration reform] side than to us,” Beck said. “They really had to change a lot of minds. Our job is to hold people where they are …. We’re just feeling that the line has been held.”

Advocates of immigration reform say Beck is moving the goalposts. They count 23 Republican members of Congress who have come out in support of a path to citizenship, including many for the first time this month.

“I knew we were going to do really well [mobilizing people]; I just didn’t think the other side wouldn’t show up,” said Frank Sharry, the longtime immigration-reform advocate who heads America’s Voice. “In 2007, they were formidable. You could argue they kicked our ass. They generated a huge volume of opposition to the bill, and it was a big factor in our defeat.”

To Sharry, the rapidly forming takeaway from this August’s political-organizing battle is that opponents of immigration reform are a paper tiger.

Before the recess, “there was a sense that immigration reform was going to be a hot topic, and Republicans would come back telling leadership we want no part of it,” Sharry said. “If anything, you have more and more members saying, ‘We’ve got to do this.’ That’s a surprising and welcome development.”

Sharry agreed with Beck that attendance at town halls is not the same as votes in Congress. But, he said, “I think it shows that at this point, the forces for reform — left, right, and center — are much stronger than the forces opposing reform. I think we’re more likely to come into September with momentum than they are, and that’s not what many would have predicted just a few short weeks ago.”

This piece first appeared in theatlantic.com