Immigration Forum highlights experiences of undocumented families in the Tenderloin 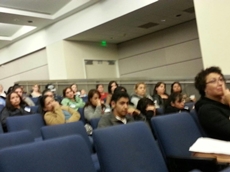 Even in San Francisco, when we think of immigration as a political issue in the country, we may think of Arizona, minute men, the Rio Grande. It can seem distant, the topic of an epic brouhaha in Congress. We may not think about this affects the Tenderloin. But it does. And San Francisco’s Tenderloin residents are fighting to educate, empower and organize undocumented individuals and their allies.

When I spoke with mothers at the event, they were in fact acutely aware that those “distant” DC policy decisions will affect them. One mother, who asked me to call her Patricia, is an active participant in La Voz, said that she came to the immigration forum because she was “interested in legal information, information about if amnesty will pass as part of [comprehensive immigration reform].” Many other mothers said the same. She added, “I want to know it will pass.”

Patricia also spoke to the issue of the public’s perception of immigrants, particularly immigrants in the Tenderloin. She expressed concerned about safety in the Tenderloin because of the “drug addiction and homelessness,” and said that she was afraid that people see that and assume that all undocumented people are as well.

Other speakers included attorneys Angela Chan of the Asian Law Caucus and Jackie Shull-Gonzales, also an immigration attorney. Among other topics, the presenters spoke about Deferred Action for Childhood Arrivals (DACA), a law which went into effect in August of 2012. It allows some individuals to receive temporary exemption from removal. To be eligible, someone must have grown up in the US and pursued education and/or military service. As Shull-Gonzales explained, “deferred action” is a stop-gap measure: although eligible individuals can apply for employment visas, it does not provide a direct path to citizenship.

Not all attendees were undocumented. Sam, a mother, resident of the Tenderloin, and a member of La Voz Latina, provided a stark reminder about how immigration issues everyone. With her four month old nestled in her lap, she said, “I came because of my baby. His dad is an immigrant.” She urged people to “watch the little kids [in the Tenderloin]—what’s going to happen to their parents if they’re illegal? What’s going to happen to babies because they’re Americans? Do they go to foster care?”

The brutality of border crossing also affects residents of San Francisco. Sam added that when her partner attempted to enter the U.S., “he spent seven days in the desert, two without water. Border patrol officers kicked him in the chest and…into a ravine. They told him ‘You should crawl back to Mexico’ and took him to jail where they hosed him down and threw him in a chill room,” where they cranked the air conditioning so that the temperature dropped into the forties.

Here is another opportunity to become engaged. The San Francisco Immigrant Rights Committee and the San Francisco Job with Justice, and the San Francisco Labor Council are sponsoring a San Francisco Town Hall meeting. Learn about what is being proposed at the national level, the impacts our current broken immigration system is having on communities and actions you can take. It will be Thursday, March 21st from 5:30pm-7:30pm at St. John the Evangelist (1661 15th St. @ Julian).

Karin Drucker is an organizer with the Central City SRO Collaborative