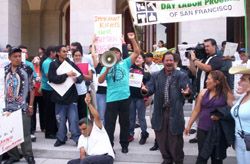 Over 200 immigrants and supporters convened on the State Capitol on Wednesday to demand drivers licenses without special markings to undocumented residents and to oppose border vigilantes in California. They met inside with State Senator Gil Cedillo to demand no special markings on the licenses, and then held a press conference at the steps of the Capitol while a group of up to ten citizens practiced civil disobedience at the Governor’s office.


Two buses of immigrants from San Francisco and dozens more from the Northern California area met with State Senator Cedillo in a crowded meeting room inside the Capitol to talk about the driver license legislature. In this session immigrant workers and families expressed their strong opposition to the proposed markings on the drivers licenses to undocumented residents. “We do not want markings, we are not animals,” chanted a day laborer from San Francisco. Senator Cedillo seemed to agree but could not guarantee passage of the driver license legislature without such marking. Similar legislature has been vetoed by Governor Schwarznegger once already, and he is expected to do so again if the marking isn’t included. The State Bill SB60, introduced by Cedillo, awaits a hearing later this summer.

Outside a press conference took place at 11am, followed by a short march around the Capitol by immigrant families and workers. Immigrant families focused on the need for them to be able to drive, while workers opposed anti-immigrant hatred by groups such as the “Minutemen” border vigilantes from Arizona chanting, “Inmigrantes, si! Vigilantes, no!” They fear that the Governor’s support for the border vigilantes will escalade xenophobia and anti-immigrant sentiment towards their community.

Inside the capitol, a small group of up to ten sat peacefully in front of the Governor’s office as an act of civil disobedience. The Governor did not communicate, and within half an hour they were arrested and taken away by California Highway Patrol. Only one person was read their rights by CHP and all were quickly moved out of the Capitol under charges of “obstructing Capitol business,” reported Renee Saucedo of the San Francisco Day Laborers Program. They were released the following morning.