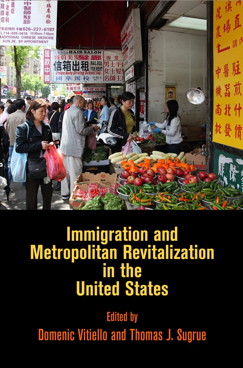 The past two decades have seen an upsurge in immigrants living in cities and the revival of formerly distressed urban neighborhoods. Thanks to a new book edited by Domenic Vitiello and Thomas Sugrue, Immigration and Metropolitan Revitalization in the United States, this connection between immigrants and urban revitalization becomes clear.

Thomas Sugrue is the author of one of the most important books ever written about American cities, The Origin of the Urban Crisis. First published in 1996, Sugrue reinterpreted the modern history of both Detroit and racial discrimination in hiring and housing in the north. Now he and Vitiello have assembled an allstar group of social scientists to give immigrants their rightful credit for reviving urban communities.

The book features a series of essays covering a very broad orbit of immigrant communities in the United States. The opening piece by Robert Sampson is among the best.

Sampson shows how it is not pure coincidence that rising immigration coincided with sharply declining crime in cities. He shows how immigrants reduce crime, while also reducing housing vacancies and revitalizing distressed business districts.

Like other essays in the collection, Sampson relies on statistics and charts. This old school approach has fallen out of favor in an era where readers prefer human interest stories as a means of conveying information. But Sampson’s method bolsters his conclusion that immigrants have played an important role in the “remarkable turnaround of the American metropolis.”

Jacob Vigdor and Gary Painter each have essays connecting immigration to housing demand. Painter’s analysis of immigrant household formation sounds wonky, but what he addresses is the impact of immigrant groups choosing to live in multi-generational housing. The impact of what Painter calls “headship” impacts housing demand and rents; this essay and Sampson’s are among the most thought provoking in the book.

Another essay of particular interest is Geraldo Sandoval’s account of how Latino immigrants near MacArthur Park in Los Angeles transformed what could have been a gentrifying transit oriented development plan into one that served the neighborhood. My grandfather ran a pharmacy bordering MacArthur Park from the late 1950’s to his death in 1963; decades later the area subsequently fell upon hard times.

One part of the story involves primarily older, white preservationists vigorously opposing the installation of permanent soccer fields in the park. Latino activists carefully avoided even using the term “soccer field” because it alienated preservationists, who wanted to keep the park a passive space. The compromise was that the soccer fields and goal posts are transformed back into meadows each day; it reminded me of San Francisco Park Director Phil Ginsburg’s successful battle to bring permanent soccer fields to Golden Gate Park over similar opposition.

There are other strong pieces, but the ones above alone make significant contributions to our understanding of immigrants’ overlooked role in making cities great again. The book is a particularly well timed rebuttal to immigrant-basher Donald Trump.

Randy Shaw is Editor of Beyond Chron. He writes about immigrants improving neighborhoods in The Tenderloin: Sex, Crime and Resistance in the Heart of San Francisco.