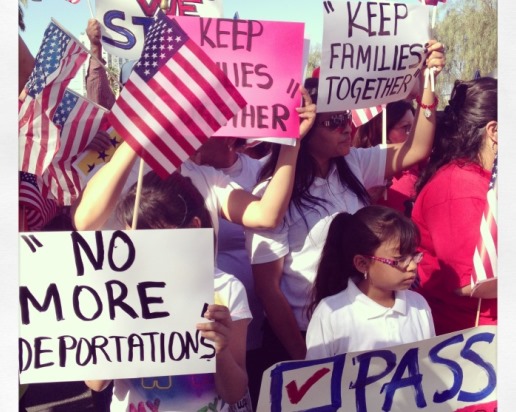 This first step toward broader immigrant justice came after comprehensive immigration reform repeatedly failed in Congress, and after the president kept his core political base waiting far too long for action.

Many immigrant rights supporters thought that comprehensive reform would pass in 2009, when Democrats controlled Congress and the White House. Instead, Obama put it on hold while he pushed for health care reform.

Hope was renewed when the Republican electoral disaster of 2012 led Karl Rove and other GOP leaders to push to get the immigration issue resolved before the next presidential election. But after the Senate passed a punitive comprehensive reform bill that troubled many activists, the GOP House leadership would not even hold a vote on this mild measure.

This made it easy for Obama to act. And fortunately for a President often criticized for excessive moderation, the went big, protecting as many immigrants as his legal authority allowed.

The media pushes the narrative of angry Republicans opposed to Obama’s action. They describe this opposition like they once did Southern Governors opposed to civil rights rulings: as based on legitimate policy differences (“states rights”) rather than racism.

Reporters do not ask the anti-immigrant Republican why, if they say the issue is about jobs and not race, they back the off-shoring of millions of American jobs and oppose minimum wage hikes. Instead, they frame a human rights issue as just another political fight, where both parties have equal claim to the truth.

If only one mainstream reporter had the guts to ask why anyone should care about politicians furious that a human being has the right to live and work without fearing deportation. Or had the courage to ask Republican opponents if they did not regret the nation’s refusal to provide a home for Eastern European and German Jews seeking to avoid what became the Holocaust.

But there is a double standard when it comes to Latinos in the United States. Unlike other immigrant groups, they are portrayed as “aliens” regardless of how long they live in this country.

A Triumph of Activism

Obama’s announcement was a triumph for activists across the nation whose grassroots pressure has always propelled the movement. As I detail in my book Beyond the Fields, which chronicles the growth of the immigrant rights movement, activists borrowed the best tactics and strategies of the California farmworkers’ movement to build immigrant power.

This ultimately took the form of young activists pressuring Obama to issue an Executive Order for the Dream Act. And in demands that Obama “go big” by protecting five million undocumented immigrants in a single Order.

Activists know their work is not finished. Millions remain unprotected and those protected still lack a path to citizenship.

But people need victories along the way to maintain momentum, and this was a giant first step. It is all too unusual for a U.S. President announce they are taking dramatic action for social justice, which made Obama’s brief speech unusually powerful.

History was made this week. And the United States acted consistent with its claim to be a nation of immigrants.

Randy Shaw is Editor of Beyond Chron. He is also the author of The Activist’s Handbook: Winning Social Change in the 21st Century