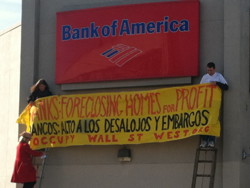 If one were to honestly assess Occupy’s current strengths and weaknesses as a movement, confusion must be the inevitable result. This is because Occupy is not one movement, but an umbrella term that encompasses several different groups that have varied aims, organizational structures, and gaping theoretical differences. Occupy may not be dead, but its power as a powerful social movement has surely been splintered into a dozen or so mini-movements. For example, a good, broad definition of a social movement is a large group of people who collectively try to achieve certain agreed-upon goals. A social movement without common goals does not move in one direction, but many; an organization without a common set of principles or agreed upon demands is not a “group,” but “groups.”

Consequently, Occupy’s various mini-movements move in different directions, towards different ends, using different means, while rarely coordinating with the other groups that are focused on their respective organization, growth, habits, and campaigns collective mass action large enough to change social policy – another key definition of a social movement – is rendered impossible.

Sadly, this was the state of the left prior to Occupy: different groups organized on an “issue-based activism” basis, focusing on their own projects, disconnected from any common vision or collective action. Occupy was different precisely because it was massive, and that these various groups found connection under a single banner. But the banner has since been pulled in hundreds of directions until it tore.

Occupy came close to becoming a real social movement but didn’t cross the threshold. Although Occupy failed to evolve into a social movement, it has laid a foundation for one, through its successful mass education around highlighting the 1% vs. the 99% and experiments with organizing and its creation of a new layer of revolutionary activists.

Occupy’s inability to grow into a mass social movement may have been inevitable, since the left’s disunity runs especially deep in the United States.

Occupy did, however, create additional barriers for itself to become a social power. Occupy was organizationally wedded to a lack of organization, preventing the enormous energy from being funneled into a social force, and thus spilling in every possible direction.

Enough Occupiers were against goal setting that no goals could be collectively pursued. The well-meaning attempts to create direct democracy and inclusion – through general assemblies, consensus, spokescouncil structures, etc. – resulted in gridlock, inefficiency, and exclusion instead, since most working people found it impossible to attend the initial lengthy, daily meetings that seemed unable to push the movement forward.

Some will argue that Occupy is doing fine, and that working towards a multitude of goals will inevitably bring victory, since all paths lead toward the same end, though few Occupiers agree on what this end should be. Working class people, however, are only powerful when they are united in mass numbers and acting collectively on an ongoing basis – no social movement has achieved social change without this preliminary factor.

It is still possible that a faction within Occupy – and there are several – could regenerate Occupy as a whole by working towards goals with a mass appeal that unite Occupy in a campaign capable of re-inspiring and mobilizing the broader population. But lessons must be learned from Occupy’s experience. The key lesson – in this writer’s opinion – is that social movements are created when they base themselves on concrete issues and goals that the majority of the population is concerned with.

For example, in the Arab Spring the movement’s goal was specifically anti-dictator and pro-democracy; in Europe it is anti-austerity and pro social services; South America’s ongoing social movements were born fighting foreign economic domination, in the form of the austerity policies implemented by the IMF and World Bank.

In all these cases the majority of working people in these countries could relate or sympathize with the goals of the movement, which helped multiply the initial protests into what later became powerful social movements.

In the United States, the number one concern of most people today – says numerous polls – is jobs. Occupy could demand that the federal government create millions of jobs, as was done in the 1930s, and pay for the program by taxing Wall Street as many in the Labor Movement have advocated.

Accessible, affordable quality public education and government social services are other major concerns. Occupy could focus its energies on demanding that the rich and corporations are taxed so that teachers could be rehired and tuition at colleges and universities could be reduced.

In other words, Occupy could aim at increasing taxes on the 1 percent in order to meet the needs of the 99 percent. This would also reduce the growing inequality in wealth. But these issues were lost in a whole laundry list of other goals that, although important, only concerned a periphery of the population.

The movement that Occupy gives birth to will be born at a higher level, with unity of purpose and collective action. It will not simply protest corporate power but directly challenge this power and the political system tied to it by the combined power of working people.