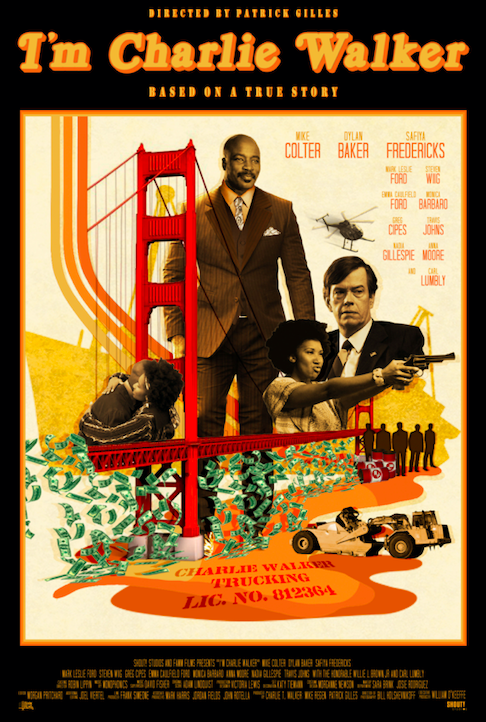 The setup of Patrick Gilles’ film “I’m Charlie Walker” could have stepped out of a Frank Capra movie.  Talented underdog finally gets a chance to show the world what his ignored talents are thanks to an emergency, and succeeds in winning the respect of his former naysayers.  However, two factors take Gilles’ entertaining tale to a different and better level entirely.  First, the film’s story is based on actual events that took place in the San Francisco Bay Area in 1971.  Second and most importantly, the talented underdog aka the film’s titular character is Black.  So what Gilles winds up creating is a Frank Capra scenario as interpreted by Melvin Van Peebles.

The film asserts its Van Peebles cred from the start by opening with a 1963 quote from James Baldwin.   That famed Black writer’s seeing little difference between life in San Francisco (California) and life in Birmingham (Alabama) will make the settled San Francisco viewer wince.  But what will really disturb such a viewer is a quote from Charlie Walker, the titular hero of Gilles’ film.  Walker sees little difference for Black people between life in San Francisco and life in the entire state of Mississippi.  What makes this quip particularly damning is that it’s made in 1971, years after the hippies and the anti-war movement had embedded themselves into local city life.  Then again, if life in 1971 San Francisco was allegedly superior to life in the Jim Crow South, why did the Hunter’s Point riots happen?

Gilles’ film mentions that notorious yet forgotten (by many non-Blacks) incident only in passing.  Instead, thanks to the narration provided by Walker’s wife Annette (Safiya Fredericks), the viewer’s quickly brought up to speed on the real-life incident that launches this story.

On January 19, 1971, after two oil tankers collided in San Francisco Bay, 800,000 gallons of crude oil spilled out into the Bay’s waters.  The oil companies wanted to clean up the mess as fast as possible so they can remove their public black eye.  The hippies and other concerned citizens volunteered to do what they could to clean up the polluted beaches and save the oil-saturated wildlife.  In the middle were the truckers, whose vehicles were needed to haul away the oil-contaminated sand.

Walker (an excellent Mike Colter) is one such trucker.  He may own his own (one-truck) trucking company, but his firm is running on fumes at the beginning of the film.  Chuck Sumner controls the local trucking industry, which means his people make the call on where the truckers work.  For Walker, that means submitting to the openly petty racism of one of Sumner’s dispatchers…and being regularly denied jobs.

The financial stress starts to impact Walker’s home life.  Annette notices that the family’s not that far away from losing their modest Hunter’s Point home.  She wonders if her husband should go back to the steady paycheck offered by bricklaying.  Walker understands his wife’s concern.  But he’s smart enough to know bricklaying is a dead-end career.  However, his preference for hustling until a far better opportunity comes along runs into the reality of his being continually prevented from having that opportunity thanks to systemic racism.

Some readers of this review may, at this point, feel uncomfortable over the repeated use of the word “racism” and wonder how much more often this writer intends to use the word.  Since pushing on in the face of racism of various flavors is a major part of Walker’s story, doing justice to the film means repeatedly mentioning racism.  When there are white people in the film for whom Walker’s skin color is not a trigger for displaying their more negative behavior, then there will be no words around race.  While expressing discomfort over a creative work is a perfectly reasonable reaction, it’s also reasonable to ask about the roots of that discomfort.  How much of that unease comes from being shown the negative aspects of treating people as Less?  Is the white Tower Oil representative handing out oil cleanup assignments really worthy of praise for ignoring Walker’s willingness to take a job…even though the film’s protagonist is standing in the front row and he’s noticeably wearing a suit compared to the white truckers’ wearing jeans?

On the other hand, viewers sympathetic to Walker’s struggles will cheer his proverbial ship finally coming in (or, as the film shows, his metaphorical oil tanker finally needing his services).  Had he not displayed curiosity, some inventive understanding of human nature, and the persistent hustle Annette loved, he would not have landed the Stinson Beach cleanup contract.

However, learning how Walker finds a way to clean up the oil from Stinson Beach turns out to be the least important part of the film.  The more important part is seeing how far Walker can take the opportunity he’s finally landed before the bigots shut him down.

Walker’s playing to the local news media isn’t (primarily) aimed at generating some public egoboo.  The viewer realizes the public attention Walker gets can be an insurance policy against petty or trumped-up racially-motivated excuses for removing him.  Bennett (a wonderfully despicable Dylan Baker), the Tower Oil president, would love to quietly ease out Walker.  But he’s not interested in generating another negative PR whammy by getting rid of someone who’s actually succeeding in cleaning up a Bay Area beach.

Both Walker and his wife have few illusions about the local racists letting him complete the Stinson Beach job.  Annette’s a quick enough thinker to foil an attempt to discredit her husband by framing him for drug dealing.  Charlie meanwhile tries to look for ways to keep several steps ahead of the people trying to cut him out of the cleanup task.  Whether it’s improvising with paddle scrapers for the clean-up or having an open bar to smooth the politics of oil company people and Stinson Beach locals inhabiting the same room, Walker more than lives up to Annette’s assessment that her husband has “plenty of hustle.”

Where the couple differ is in how long Walker will get away with working on the clean-up.  In a rare moment of anger commingled with fear, she tells her husband he’s ten steps away from being treated like a modern-day runaway slave.  Walker, on the other hand, is more of a “let’s play the lucky streak as long as it lasts” type of person.  Luck, after all, brought much of the leaked crude oil to the only beach where paddle scraping would indeed work to remove the oil-soaked sand.

The film’s hero certainly makes good use of the power he’s been given.  He stands up to a racist dispatcher who tries to make a play for his equipment.  Walker is justified in firing a white worker despite his desire to use the “you can’t fire me, I’m a white man” card to excuse personal negligence that resulted in a child being injured.  Sumner’s racist microaggressive characterization of Walker as “too flashy” hides his discomfort at his underestimation of the Black man’s talents.

However, Gilles wisely avoids imbuing Walker with Smartest Man In The Room powers.  When Colter’s character finally gets outmaneuvered by Bennett, his reaction is not one of having predicted such an outcome but that of somebody who’s returned to a familiar place of being defeated.

Then again, this isn’t the first time in the film the mask of confidence has slid off Walker’s face.  In a memorable moment, the film’s hero shares a joint with some of the hippies working for him.  The pot relaxes the Black man enough to muse on what he thought was the racial significance of wielding actual power vs. the reality of actually doing so.

If Walker’s musing on power was a wonderfully unexpected moment, the final meeting between him and Bennett could be called a very predictable one.  Yet what’s supposed to take place during that meeting initially seems unclear.  Bennett seems to hold all the cards, including a threat of legal action against the man who used to handle the Stinson Beach clean-up.  Walker’s showing why the oil company executive’s action won’t happen provides a wonderful surprise for the audience.  But the bigger and more satisfying surprise comes from seeing how Walker treats this personification of the wealth and power denied Black people such as him with the reverence it deserves.  (Hint: See John Scalzi’s famous essay on society’s lowest difficulty setting.)

Ultimately, “I’m Charlie Walker” is the welcome sort of film that will inflict the vapors on the “work hard, play by the rules” crowd.  For that canard doesn’t recognize realities where the rules have been fixed so that hard work yields frustration but never success.  Rather than continuing to be chumpatized by the lure of fake honor or morality, Walker’s story shows when such rules need to be inventively finessed to give one’s loved ones a chance at a future they’d otherwise be denied.