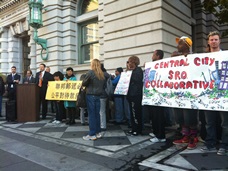 On Tuesday morning, a crowd of SRO hotel tenants gathered at the 9th District Court of Appeals building at 7th and Mission, shouting, “Put our mail IN THE BOX.” Shortly after, a 9th Circuit U.S. Court of Appeals panel of three judges would hear arguments seeking to reverse a 2011 decision allowing the U.S. Postal Service to deny mail delivery to mailboxes in SRO hotels.

Advocates from the Central City SRO Collaborative and Chinatown Community Development Center pointed out that SRO hotel tenants are typically the most economically disadvantaged, often seniors, and often living with disabilities. In an age of iPhones and electronic records, they are therefore among the most reliant on snail mail. But they confronted a Ninth Circuit panel of judges who seemed entirely unaware that SRO’s are longterm housing, or that San Francisco and other cities have laws preventing SRO’s to rent to transients. Ignoring the court record, Judge Farris even claimed that since people “can check in one day to an SRO and check out the next,” that SRO’s are transient housing that the Post Office can ignore.

Tuesday’s appeal by the Tenderloin Housing Clinic and San Francisco City Attorney Dennis Herrera sought to reverse a 2011 trial court ruling that enabled the U.S. Postal Service to continue its policy, since 2008, of “single point delivery” to SRO hotels—that is, dumping it in a heap for managers or tenants to sort. In contrast the Postal Service delivers mail to individuals’ mailboxes (“centralized delivery”) for other residential units including apartment buildings. Attorney Steffen Johnson of Winston Strawn LLP, representing the City of San Francisco and Tenderloin Housing Clinic, et al., called for a reversal of the summary judgment decision, which would result in a new trial for the 2011 case challenging the Postal Service’s policy.

This conflict dates to before 2006, when, as District 6 Supervisor Jane Kim stated at the press conference, the Board of Supervisors passed the City’s Mailbox Ordinance. This required SRO hotels to install individual mailboxes for their tenants. By 2008, after roughly 50% of hotels had complied, the Post Office claimed prohibitive costs and resorted to single-point delivery for any hotel that had not converted to centralized mail by 2008. Now, nearly two-thirds of the city’s SRO residents see their mail dumped.

Randy Shaw, Executive Director of Tenderloin Housing Clinic, quipped, “Imagine if the NEMA [a luxury residential community at 10th and Market] landlord told tenants, ‘Your mail is in that huge stack over there. You can go dig through it. There’s no way people would rent a unit in that building.’” That landlord would probably receive the same barrage of complaints that Laura Meek, resident manager of the Edgeworth Hotel on O’Farrell Street, hears daily. “‘Where is my mail?! When is it going to be delivered?!’”, she quotes. “It is so important for them to be able to get their medications without worrying about fraud or theft.”

Supervisor Kim added, “This denial of equal protection applies to the vast majority of tenants in Chinatown, the Tenderloin, and South of Market, where most residential units are in SROs. Today is Election Day, but what use is your right to vote if you cannot get your absentee ballot in the mail?”

In 2011, the court agreed that the Postal Service has a “rational” reason to cut costs by refusing central delivery to SROs because there is a clear distinction between SROs and other residential buildings, including ‘family hotels’ (which have no formal definition). Johnson argued, “Whether its residents are poor have no bearing on how much it costs to deliver mail [but the] consequences of not delivering are devastating when you are living check to check.” He also called the Postal Service’s distinction between apartments and SROs “arbitrary and irrational.”

San Francisco has gone to great lengths to ensure that historically residential SRO hotels maintain their residential use. This has kept them available to low income tenants. The city has had a Residential Conversion Ordinance in place since 1981, which restricts tourist use. Residents, while they rarely sign long-term leases or pay security deposits, pay monthly and hold tenants’ rights. The average length of stay for Tenderloin Housing Clinic SRO tenants was 3 years, according to the 2011 lawsuit, but this number is frequently much longer, Johnson noted. “According to experts, SRO tenants are no more transient than apartment dwellers.”

In the courtroom, however, false perspectives about SRO hotels flew fast and thick. In response to Johnson’s statement about comparative move-out rates, Judge Farris retorted, “An opinion of an expert is still only an opinion.” Frequently referring to SRO tenants as “transients,” Judge Farris suggested that since SRO tenants can simply “check in and check out,” there was no need for the Postal Service to deliver to individual mailboxes. He added that the main evidence against long term residence in SRO hotels also include the fact that they “look more like short term occupancy dwellings because they have no bathrooms or kitchens.”

In fact, Lowis Sturgill of the Department of Justice, representing the Postal Service, claimed that San Francisco itself seems to consider SRO hotels primarily as tourist hotels because it “charges over 90 percent of SROs with hotel taxes.” However, these hotel taxes apply only to rooms rented for tourist purposes. And considering the over 1000 apartments rented each night in San Francisco for transient occupancy and hence subject to hotel tax, the Postal Services’ reasoning would mean that individual mail delivery to apartments should also be stopped.

Kevin Stull, a SRO tenant, heard the oral arguments and left the courthouse feeling wounded. “He called us transients,” Stull said. “That is incredibly derogatory—and false.”

Responding to Johnson’s point that SRO tenants rely more heavily on the Postal Service for Social Security checks, medical supplies, food stamps, and other forms of public assistance, Judge Farris asked Sturgill rhetorically, “Is there any prohibition against a person in an SRO who knows he is expecting important mail from renting a post office box?” This is coming from a man who once paid $500,000 to the City of Seattle for illegally cutting down 120 trees in a public park. It costs between $10 and $80/month to rent a P.O. Box in San Francisco; SRO tenants who receive $64 or $104/month from General Assistance cannot spare that.

While it will take one to two months for the three judge panel to decide whether or not to shunt City and County of San Francisco et al v. U.S. Postal back to trial, the arguments seemed to suggest that misconceptions about SRO hotels ruled the day. City Attorney Herrera has said, “There is no legal basis for the U.S. Postal Service to discriminate against SRO residents as a cost-cutting measure.” We can only hope that contrary to appearances, two of the three judges who heard Tuesday’s appeal will agree.