Ignorance is Bliss in Texas 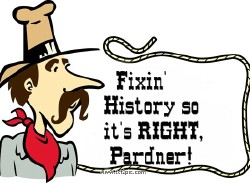 They say that ignorance is bliss. Nowhere is that more evident than in Texas where the State Board of Education has completed a new history and social studies curriculum that has nothing to do with learning and everything to do with promoting the Bible, the Confederacy and free enterprise. Not to mention exclusion of people of color and others that right-wingers don’t like.

The change could have national impact as Texas, with its 4.8 million students, is a major market and textbook publishers often use the books produced for that state for other places as well.

As Ben Jealous, president of the NAACP, said: “It’s going to lock kids into the dark ages, where the whole world’s been turned upside down — where Thomas Jefferson is not a founding father, there’s no good reason to talk about Thurgood Marshall, and Joe McCarthy is a hero.”

The Board is “changing the record on slavery, celebrating the confederacy and shedding a positive light on Jim Crow laws,” he said.

Jealous is right. The Board, which is dominated by right-wing Republicans, originally intended to re-name the slave trade the “Atlantic triangular trade,” but it changed its mind. Of course, it approved it on a first vote, which should be embarrassing enough, but I don’t think these folks are capable of shame.

The new curriculum all-but-ignores any criticism of Senator Joe McCarthy, who ruined the lives and careers of countless people suspected of being communists. In fact, it vindicates him. It also proposes that the Civil War was fought over states’ rights, not slavery.

It deletes any mention of activist César Chávez (and no doubt Harvey Milk), but adds former President Ronald Reagan (who ignored the AIDS epidemic and allowed countless numbers of people to die) to a list of “great Americans,” citing his “leadership in restoring national confidence following Jimmy Carter’s presidency.”

The new curriculum mandates that students study conservative individuals and organizations, such as anti-feminist and anti-gay activist Phyllis Schlafly, the Moral Majority and the National Rifle Association – but not progressive ones.

To add insult to injury, the board of “education” proposes that separation of church and state is a myth, and that America is a Christian nation.

Cynthia Dunbar acknowledged that belief in her invocation at one meeting: “I believe that no one can read the history of our country without realizing that the good book and the spirit of the savior have from the beginning been our guiding geniuses.” Wrong!

There are obviously no geniuses on the Texas Board of Education. Just a lot of uneducated fools who should not be tampering with school curriculums. Leave that task to those who understand that learning is about critical thinking, and that one can still love one’s country and acknowledge its failings as well as its shining moments.

None of what the board has done should come as a surprise to anyone: last year it gave the state’s science course a serious makeover in order to downplay evolution and the Big Bang.

In Texas, ignorance is not just bliss. It’s required in the schools.