If You Were Ten Paces from the President would you assassinate him? 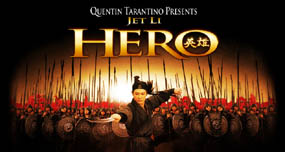 For more than two years, Miramax has delayed the release of Yimou Zhang’s Hero. Released in 2002 in China, it was China’s highest grossing film and almost unanimously touted as a magnificent film. Now, several records for bootlegging later, it has finally reached the United States.

The film tells the story of four assassins who have conspired to kill the King of Qin. The King of Qin has undertaken the daunting task of trying to create an empire by conquering the other five states that make up China.

This has made the King a marked man and the ongoing target of three assassins, Sky, Broken Sword, and Flying Snow-highly skilled martial artists who, with Crouching Tiger Hidden Dragon-esque powers, can take on entire armies individually. Due to the assassins’ abilities, the King lives in constant fear of his life, so much so that he has decreed that no one is to come within one hundred paces of him.

However, the king’s worries are put to rest when a humble police officer from Qin, known only as Nameless, kills all three assassins, thus becoming the savior of Qin. Part of Nameless’ reward is that for every assassin that he killed he is allowed closer proximity to the king. Nameless is invited to the king’s throne where he is asked to share how he killed such highly skilled warriors.

The film then shares three different accounts of the events that led up to Nameless now being in such close proximity to the king. The first story is a made-up account by Nameless, the second the King’s assumption of what really happened, and the third the true account of what actually happened.

In the third and final account we learn that Nameless is actually an enemy of the King who has conspired with the other three assassins to kill the King. Nameless is such a skilled warrior that he can kill anyone within ten paces of his reach in seconds. However, when given the opportunity to accomplish his task with the King, he chooses not to.

In what has caused much controversy, and a significant amount of criticism of the director Zhang, many critics have claimed that the message of the film condones the tenets of empire. One critic, Stephen Hunter of the Washington Post claims that the film promotes the “tyrants creed” that the building of empire through unification at any cost is better than perpetual war between nation-states.

Hunter goes on to draw metaphors between the King in Hero to Stalin, Mao, and Hitler. However, the same comparisons could be made of the Bush administration and the neo-con’s mission of creating an American Imperialist empire built upon the auspices of laissez-faire Capitalism and “Democracy.”

This omission seems, from a critical stance, glaring. Whether it be the ill conceived notion of pre-emptive wars, the attempted coup of Venezuelan President Hugo Chavez, or the displeasure over President Lula in Brazil, just to name a few instances of Bush/Corporate empire building, empire-building seems more current than some analysts are willing to admit. If one is forced to make cultural comparisons between current cinema and political machinations, it would appear that Hero speaks volumes about us.

However, Hunter and other critics have missed a more important message that can be drawn from Hero. Regardless of the criticism of tyranny, whether it is Communist, Fascist or Corporate, the film attempts to deal with the grander issues implicit in the complexities of society and the political structures that we establish for governance.

With this I do not want to make it seem like there are no differences between presidential candidate John Kerry and President Bush. There are huge differences and any informed progressive understands how important it is to get Bush out of office. However, getting rid of Bush is not enough. In order to create real change it is necessary to become active within one’s community and strive for change.

One important step for change is informing yourself as a voter, especially if you are voting in San Francisco. This November there will be a tremendous amount of different initiatives on the ballot, educate yourself so that when you get to the ballot you know what impact your vote will have.

The only way to create real significant change is to understand the significance of our actions beyond our individual needs and desires. In the end, Nameless makes his decision based on this understanding. He comes to understand that his one individual action, no matter how significant it might seem, would not lead to the resolution which he desired, the end of suffering for his people. In order to influence change it is not acceptable to be politically active only every four years when our “fearless leader” is chosen. As important as voting for President is, real change can only be affected in conjunction with political community activism at all other times.

So if you were ten paces from the President what would you do?