If NYC Can Get Bicycling Done, So Can San Francisco 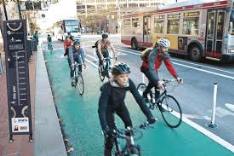 While riding down New York City’s most densely packed thoroughfares courtesy of its Citi Bike program, I could not help but think why that city has become so much more bike friendly San Francisco. After all, as Mayor Lee often reminds us, San Francisco is the leading city for innovation. It put forward the most innovative programs on homelessness and AIDS, shook the world by granting gay marriages, and now is the only city implementing creative strategies to save public housing. But on bicycles, San Francisco has delayed and squashed innovation, rather than promoted it. The city allows a small minority to frustrate plans, and defers to city departments for seemingly endless “studies.”

How to we get immediate action on transforming Market and Polk Streets into bike lane thoroughfares? How about bringing the mayor, Board of Supervisors, and key department heads to NYC to observe the positive transformation on streets with just as many engineering and transit challenges as anywhere on Market Street? Even better, they should all ride down Second Avenue, whose segregated bike lane coexists with traffic complexities at least equal to those on Market. All of the arguments against bike thoroughfares in SF were disproved in NYC, yet it may take personal experience for SF’s transit leadership to move forward.

I wrote last June 17 that “the time is now” to begin incrementally implementing the Better Market Streets plan, particularly its transformation into the city’s leading bicycle thoroughfare. A Supervisors Committee held a hearing on the plan’s delay that day, and despite Supervisors Chiu and Wiener expressing great concern about the lack of progress, the matter was deemed in need of “further study.”

Meanwhile, while dozens of city staff study this problem, the high-tech companies that bought buildings on Market Street are starting their renovations. Some will soon move in, no doubt wondering how the massive NEMA apartment building at 10th and Market could have been entirely completed before even a decision was made about whether bus and bicycle traffic will be concentrated on Market or Mission Streets.

Thanks to Mayor Lee’s public leadership (and private encouragement), Market Street has come back from over fifty years of steady decline. And even if the city does nothing to make the street come alive through more active pedestrian and bicycling use, Market Street will be economically viable.

But I think the Mayor, Board and most people have higher expectations for the onetime Great White Way. And that means doing for Market Street what New York City did for vast sectors of its busy midtown area and other key thoroughfares: increase commercial and sidewalk activity by creating and encouraging bike thoroughfares.

Encouraging sidewalk life is particularly important on Market because of its unusually wide brick walkways. Unless you have positive activities in these areas—which people stopping off on their bikes for coffee and food promotes, while people rarely get on and off buses, particularly under Market—-negative conduct often proliferates.

Unless something changes fast, we will have the private sector having done its part to build and renovate Market Street buildings while the public sector still debates how the street and sidewalks will be used. Add the ongoing problems at UN Plaza and it appears the city is falling behind in keeping up with its part of the sharing economy.

An official visit to NYC may also illuminate the realities of how its bike lanes on heavy transit corridors came about: there was strong opposition, but unlike in San Francisco, it was not allowed to delay the outcome. To its credit, San Francisco does approach problems in a more consensus way than in Bloomberg’s NYC; but the Market Street delays are approaching the type of obstructionism that has caused such unnecessary problems with the Geary Street BRT and elsewhere.

Think of the excitement that will run through the city when the Board of Supervisors approves segregated bike lanes throughout Market Street. People will again be talking about a world-class thoroughfare, something unimaginable when Mayor Lee took office less than three years ago.