I Was a Target of Homeland Security 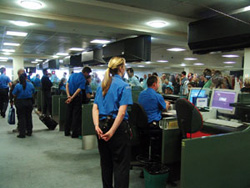 When I stepped into the San Francisco airport a week and a half ago to begin my vacation in Central America, I knew it wouldn’t be an easy experience. The recently unearthed suicide bomber plot in England had everyone talking, and three steps off the first escalator I heard ‘We are in Homeland Security Code Orange’ blaring over the building’s public address system. Regardless, I still felt confident I’d make it to my destination, even if it would take a little extra time. I was flying to Guatemala, an extremely unlikely spot for terrorist action; I was an experienced international traveler who had never had any problems before; and I was an American citizen with a passport I’d already used to enter more than 10 countries. But in the words of Buffalo Springfield, paranoia strikes deep, and it wouldn’t take me long to experience firsthand the profound affect the war on terror has had on our ability to travel.

I’d been meaning to travel to Central America for a long time – after living in Eastern Europe for half a year and then spending a few months traveling throughout the continent, I felt heading south from the states would be the perfect place to find my next adventure. Last year a short trip to Mexico only heightened my curiosity about Latin culture, so when my partner decided to do some volunteer work in Guatemala, I jumped at the chance to join her for some travel.

I arrived at San Francisco airport last Friday more than three hours early for my flight, a midnight red-eye to Houston, where I’d catch a connecting flight down to Guatemala City. I checked in, scanned my passport across a glass screen, received conformation that I was who I said I was, and collected the boarding passes as the ticket machine spit them out. ‘I’m on my way,’ I thought.

After making it through security with no troubles and eating some awful food at an airport bar, I climbed onto my flight and promptly fell asleep. Landing in Houston at 6, I spent 3 hours waiting to board my connecting flight. And that’s where the trouble started.

An airport worker checked my ticket when I walked up to board the flight. She asked to see my passport, which I promptly gave her. She flashed me a few strange looks, I guessed because of my newly grown beard, and then stared hard at my passport.

“This passport is damaged,” she said, pointing to a lightly frayed corner on the page that had my picture on it.

I responded as calmly as I could that I’d used the passport to enter 12 different countries (reflected by the variety of visa stamps throughout it), that it looked more like a small bit of wear and tear, and that airline officials had already approved my passport in San Francisco.

“No,” she responded. “It’s starting to separate. Look.” She then held up my passport in front of, gripped two pieces of the frayed corner of the passport, and ripped them apart in front of me. In the space of two seconds, my chances for a relaxing vacation quickly went down the drain.

I asked to speak to someone else, but the only people she would contact where other airline workers, who all agreed that her decision should stand. The fact that my partner was traveling two hours from her volunteer location to meet me at the airport in Guatemala City, the fact that I was leaving, not entering the country, and the request for an actual customs official to weigh in on the subject seemed to have no effect.

I was placed on a flight back to San Francisco before I could say “liquids and gels.”

There’s no doubt there’s a need for heightened security in these harrowing times, my experience in Houston bordered on the absurd. I was leaving the country, not entering it, and had a perfectly legitimate passport. The only motivation I can imagine the airline employee had was a deep paranoia that manifested itself either in the belief that I had somehow produced a fake passport, or wanting to reject someone’s passport simply to prove she was doing her job.

In any event, readers of Beyond Chron traveling this summer should be extra careful about their travel documents, and think about shaving off their beard if they have one. In these hyper-stressed times, the conditions at the countries airports have become Orwellian. I heard on the loudspeakers that off-color jokes about terrorism would not be allowed, and returned from my trip to see in the New York Times that certain facial expressions are not allowed in airports, as they are indicators of terrorist activity.

The war against terror has been created as one that can never be won. But it can be lost so easily, and after my trip, I realize it already has been. If terrorists’ primary goal is to scare our country into dramatically changing its resident’s lives for the worse, then they’ve achieved victory.

Guatemala, by the way, was beautiful.