I Want My Projects Back 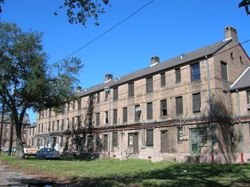 After being displaced by the storms, New Orleans public housing residents are now being displaced by Housing Authority employees. On November 16, 2005 the Greater New Orleans Fair Housing Action Center filed a complaint of discrimination against the housing authority. With the city’s poorest residents scattered across the country, the Housing Authority of New Orleans (HANO) and the Urban Land Institute (ULI, a Washington based redevelopment agency) have seized the opportunity to launch a major land grab across the city. In mid-November, the ULI released redevelopment plans for New Orleans which include the closure of many of the neighborhoods most damaged by Hurricane Katrina.

The River Gardens community, home to many displaced New Orleans natives are now housing HANO workers, while evacuated tenants are told that there are no units available. The River Gardens tenants involved in the complaint know the Urban Land Institute well.

“The ULI played a key role in developing the plans for the class and ethnic cleansing of the St. Tomas development and surrounding neighborhood,” said Jay Arena, a longtime housing rights activist.

In the early 1990s, the St. Thomas housing projects were destroyed to make way for the “mixed income” River Gardens community. The Urban Land Institute was a leader in the re-development project, which resulted in the displacement of hundreds of St. Thomas residents. In 2003, under pressure from tenants and housing rights advocates an enforcement agreement was reached giving former St. Thomas residents preference in any River Gardens vacancies.

“In the wake of Hurricane Katrina, affordable housing in New Orleans is more scarce than ever. As such, it is essential that HANO comply with the 2003 enforcement agreement,” said James Perry, Executive of GNOFHAC.

When the ULI released plans to close down entire neighborhoods, and many public housing sites due to extreme damage, a small group of public housing tenants and activists gathered at the CJ Cooper projects. The visit was organized to show media organizations the condition of housing units that HANO has deemed “beyond repair.”

Sam Jackson, a long-term resident of the Cooper projects, lives on the first floor and his unit was virtually untouched by the storm. There is no evidence that the flood reached his unit and his home shows no signs of the water damage or black mold present in much of the city’s most impacted areas.

Mr. Jackson received a notice to vacate his unit by December 31, 2005 or face legal prosecution.

“I grew up in this project. I was born right over there,” said Ralf Lewis, a lifelong resident of the Cooper projects, as he gestured toward his intact unit. “People look at this as a project but this was a community. I want my projects back.”

The Urban Land Institute is just one of the many national redevelopment agencies in the business of tearing down low income housing to create “mixed income” communities with fewer units accessible to low income people.

In the wake of Katrina, residents of public housing were evacuated across the nation. Most still remain in shelters and temporary housing outside the city, creating tremendous obstacles to their participation in making the major decisions about rebuilding their communities.

With the December 31 “notice to vacate” rapidly approaching, many evacuees may return only to find themselves victims of a second disaster. Locked out, homeless, with lifetime possessions long gone to the dump, the ramifications of the impending man-made disaster may, for many, reach farther than natural disaster.