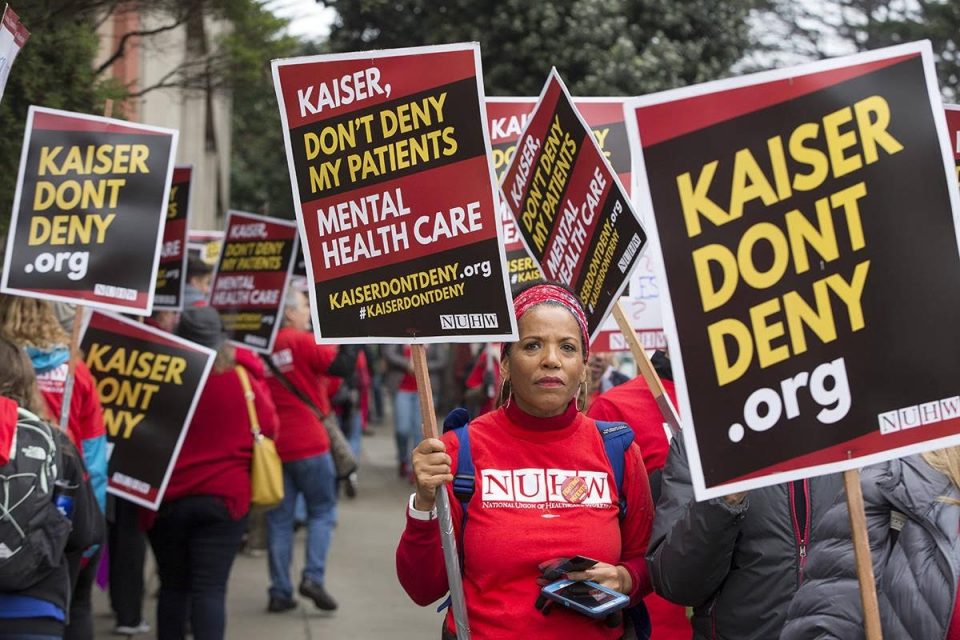 Picketing began early Monday morning in Fresno, Sacramento and San Jose – temperatures there were predicted to reach triple digits by the afternoon. There are also pickets in San Francisco.

The union explained why: “For the past decade, Kaiser psychologists, therapists and social workers have done everything in their power to make Kaiser fix its broken mental health care system. They’ve gone on short- term strikes, filed whistle-blower complaints that resulted in record fines and helped pass new laws aimed at improving access to care. But Kaiser patients are now waiting months just to start therapy and clinicians are leaving in droves because they can’t provide the care their patients need to get better.”

The union is not alone in challenging Kaiser’s mental healthcare practice. Kaiser has been fined by state regulators for its lack of mental health care, sued by local prosecutors. It is now facing a new state investigation following a sharp rise in patient complaints last year. Kaiser also has failed to comply with a new state law requiring follow-up mental health therapy appointments be provided within 10 business days.

Now after a year of contract negotiations in which Kaiser has rejected proposals aimed at increasing staffing and improving access to care, clinicians who voted in June to authorize their first ever open-ended strike, are striking to compel Kaiser to put an end to its gaping disparity between the care it provides for mental and physical health conditions.

“We understand that striking is really a last resort but at this point, we’ve tried everything and the status quo is just unacceptable to continue to go on,” says Sarah Soroken, a triage therapist who works at Kaiser in Napa and Solano counties:

“Patients are suffering. They’re not getting better; they’re getting worse. Some are experiencing worsened prognoses or suicide attempts. Therapists are being forced to practice their trade in a way that violates their profession’s code of ethics and state and federal mental health parity laws.”

There have been half a dozen strikes at Kaiser in the past decade, as mental health care workers, unheralded, have fought to make it possible to treat patients with the attention and treatments they deserve (and pay for).

These strikes when few could deny that this country is experiencing a deep crisis in mental health (depression, addiction, suicide) made all the worse by COVID, the massacres, a political malaise, and the spectacle of never-ending war.

The California health care industry is massive, a corporate kingdom employing hundreds of thousands, cashing in with billions in profit – for profit and not for profit alike.

Kaiser Permanente was once considered union friendly, a progressive organization which enrolled thousands of trade unionists. No more. Kaiser is today one of the largest not-for-profits in the country; it, is the pacesetter in California. Kaiser is based in the Bay Area with 39 nine hospitals and some 700 medical facilities.

In recent years, it has grown by 600,000 members; it now employs some 300,000 workers, including 80,000 nurses and doctors. In 2020, its profits were $6.4 billion. In 2021, its net worth, according to the California Department of Managed Health Care, was $43.3 billion. CEOs are compensated handsomely. Salaries compared to workers: 231-1!  Greg Adams, the chief executive in Oakland received $17.3 million in total compensation in 2020. He and the 100 top executives have the benefit of eight separate retirement plans.

Kaiser can do this! It has the money.

“We are striking because our patients aren’t receiving needed services,” says Shay Loftus, a psychologist, also in Kaiser’s Napa/Solano  “We’re not willing to be part of a system that disrespects the work we do and prevents us from providing ethical care. Kaiser has no excuse to continue treating mental health care as a separate and unequal service, and we’re going to keep striking until that changes.”

How you can help

A note from the union: We know Kaiser’s playbook: Cancel thousands of appointments, make patients suffer, blame the therapists, and reject every proposal therapists make to improve care.

Cal Winslow’s latest book is Radical Seattle: The General Strike of 1919.  He is Director of the Mendocino Institute.