“I Heard That” — Yoshi’s Grand Opening in the Fillmore 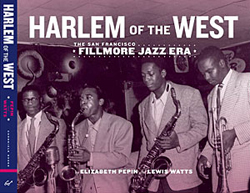 Oh Happy Day in Da ‘Mo, for Jazz lovers especially! “The Rebirth of the Cool!” Tonight is the Grand Opening of Yoshi’s San Francisco, and the return of a major Jazz club in the City and Western Addition area of lower Fillmore Street! It’s been a long time coming!

Remember another happy day – October 11, 2005. Groundbreaking Celebration at the corners of Fillmore and Eddy was an historic red letter day in the Western Addition District of San Francisco for the community and developer Michael Johnson, a young Black man with a vision, lover of the music we call Jazz, and at the right place at the right time!

At last construction would begin on the site, last part of San Francisco Redevelopment Agency Parcel 732c (for years an eye-sore and reminder of a dream yet fulfilled) soon to be the home of the Fillmore Heritage Center that would include Yoshi’s Jazz club.

The gentrification of the Fillmore Western Addition, called “Black Removal”, began in the mid-60s; bulldozers leveled Black businesses and residences, disrupted lives, displaced, given vouchers of promise to return when area was rebuilt which took many years; for most the opportunity never came! Other ethnic groups took over the area.

One man got lucky! For almost 20 years, Charles “Chuck” Collins, a San Francisco business man, had action on the Parcel 732c site but couldn’t dig up the dirt – stumbling blocks, powerful Fillmore community leaders in heated debate objected his idea to build a mixed-use entertainment complex that would include a noted Jazz Club – The Blue Note, already established in New York City. While others wanted affordable housing! For him – a real struggle! Much to his disappointment Collins had to give up his dream! The bottom line – he kept the idea alive – the keeper of the lot and flame until Johnson came along!

Johnson won the bid, and took on the challenge to develop San Francisco Redevelopment Parcel 732c. It had been an up and down struggle, the last opportunity for a Black developer to make the dream a reality otherwise the project would have fallen into another developer’s hands, already waiting in the wings!

The signification occasion was held across the street inside The West Bay Conference Center on Fillmore, that saw City dignitaries, Task Force members, musicians in attendance. The celebration concluded at the construction site where Johnson, accompanied by Mayor Gavin Newsom and former Mayor Willie Brown and others, walked across the red carpet rolled on the bumpy lot cement, to cut the red ribbon.

West Bay was packed with community folks and others there to celebrate this long awaited event. The link that would complete the Fillmore Jazz District, an idea and dream that started on the drawing board in the early 90s with an influential group of community folks assigned to a Task Force (included Naomi Gray and Mary Rogers – Da Mother of Da ‘Mo, both deceased) to help jumpstart Lower Fillmore (Geary to Eddy) to attract tourist to the legendary, but dying area, once the heart and soul of the Black Community in the Western half of the City!

So here we are today, the bright neon sign of Yoshi’s spotlight headliner Legendary drummer Roy Haynes and The Yoshi’s Birds of a Feather Super Band who will perform tonight only! Sold out for weeks, and the tickets ain’t cheap!

Last night VIP Invitation-only affair saw well-heeled guests, San Francisco “who’s who,” formally dressed to the nines, step across the red carpet into Yoshi’s for the Private party; myself included wearing red – my color, to enjoy, mingle – too late to review this week – definitely will tell all next week!

One thing for sure, Yoshi s upper echelon Management team – Kaz Kajimuira, owner/Founder of Yoshi’s, and historic partnership with Michael Johnson, owner/developer celebrate a coming together of two cultures!