“I Heard That”: Thoughts on the Inauguration 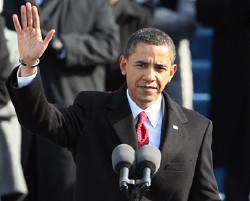 CONGRATULATIONS, MR. PRESIDENT! Tears streamed down my face, heart bursting with joy and pride when BARACK HUSSEIN OBAMA took the oath of office to become the 44th President of the nation. AT LAST he’d crossed the FINISH line (flashback to Beyond Chron column dated September 3, 2008). AH, TIS WONDERFUL TO BE BLACK IN AMERICA!

SO EXCITED, up at 4:30 a.m. not wanting to miss the happenings that led up to the Swearing-in! My heart filled to watch millions of people on the National Mall; especially Black folks who traveled from all over the country to witness the festive celebration!!! NOT A DREAM! The appointed moment came! Transfixed! Observed the solemn figure of OBAMA, majestic in stance, erect, handsome in dark overcoat, crimson tie, white shirt; wondered what he was thinking as he took the most important steps in his life; walk the light blue carpet, flanked on either side by uniformed Security, proceeded by two GRAND LADIES – SENATOR DIANNE FEINSTEIN and HOUSE SPEAKER NANCY PELOSI to the Capitol platform where so many great men had stood before him; this time he became THE FIRST BLACK MAN to be sworn in!

MICHELLE OBAMA held the Lincoln Bible, their two beautiful daughters MALIA and SASHA touched our hearts to see looking like sugar ‘n’ spice, make no secret they adore their daddy who show the same in his attention to them. I THOUGHT – what an amazing time for them. The Obamas are the PERFECT LOOKING FAMILY – melded together for the times by a HIGHER POWER!!! Prior to the Swearing-in, the QUEEN OF SOUL ARETHA FRANKLIN sang “AMERICA.” She out did herself with the ELEGANT HIGH FASHION VOGUE designer chapeau she wore – OFF DA HOOK! Betcha’ diehard church going sistuhs HOLLERED!!!

Still recalling the Black Experience the day after the celebration of Martin Luther King, Jr. Holiday, ICONS of the Civil Rights movement were there – Rev. JESSE JACKSON,Sr., REV. JOSEPH LOWERY gave the Benediction. I always feel the pain in the old Civil Rights worker Representative JOHN LEWIS (D-Atlanta) who quietly shed tears, as the moment had to be SWEET! He saw the dark days of the Civil Rights Movement back in the 6os, even darker in the 50s. Lewis sat near the entrance door when Obama walked out on the platform and shook his hand.

Rep. Lewis, when interviewed by CNN’S WOLF BLITZER reflected back to the suffering, struggles, arrest, jails, beatings, wished DR. KING, ROBERT KENNEDY, JOHN KENNEDY, and LYNDON JOHNSON were all there to witness the moment. Blitzer asked, “Did you ever think you’d reach this moment ?“ Lewis stated “I never thought that I would live to see this moment – this is a moment of HOPE, is a moment of gratitude, a moment of Thanksgiving ONLY FOR THE AFRICAN AMERICAN that we could come so far in such a short time.

“Dr. King, if he had been alive today, he would have said I TOLD YOU that one day we’ll make it to the promise land as he said the night before he was assassinated, I’ve been to the mountain top, I looked over and I’d seen the promise land, and we will get there as a people! I may NOT GET THERE WITH YOU BUT AS a people and as a nation we WILL get there. “ Lewis said “ We may not be there yet but I think what happened today, the Inauguration of this young man as president is significant DOWN PAYMENT on making the DREAM of Dr. Martin Luther King, Jr., become a reality!”

HIGHLIGHTS from my perspective of the Inauguration…SMILED watching The Presidential couple exit from the BLACK BEAST (BAAAAD RIDE!). The ROCK STAR SWAGGERED down Pennsylvania Avenue, holding FIRST LADY MICHELLE’S hand, both waving to the crowd lined both sides of the street! BOY DID THEY HAVE RHYTHM IN THEIR MOVES! Michelle pranced lively in green pumps (couldn’t tell if her feet hurt), a knockout in chic lemon grass yellow coat and dress, black coarse hair swaying in the breeze – cold as all get out but SISTUH GIRL STRUTTED HER STUFF – Both fashion plates STROLLED the avenue putting on a major FASHION SHOW – THEIR STYLE OF POMP AND CIRCUMSTANCE! OUR CHEST BURST AS IF TO SAY RIGHT ON!

Like many REAL women, DROOLED over moments during the INAUGURAL BALLS, to watch the two embrace in dance to BEYONCE’S singing of “AT LAST” (ETTA JAMES GOT GAME on that song!!!); to watch Michelle in her white one shoulder strap ivory chiffon long gown, organza flowers and crystals, with long TRAIN, that proved too cumbersome for dancing, caused OBAMA to stumble on the hem AND WHY PREZ couldn’t get his OLD SCHOOL GROOVE ON as they held each other – ROMANTIC as all get out!!! The FIRST couple looked so in love, happy; surely they must have held each other even CLOSER AFTER the last dance, once back in the White House NOW THE SOULFUL BLACK HOUSE!!!