“I Heard That:” The Passing of Legendary S.F. Bartender Lionel Hornsby … 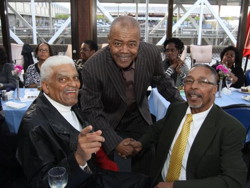 Oh, Happy Day! Earlier this year, Mayor Ed Lee proclaimed March 31, 2012 LIONEL HORNSBY DAY in San Francisco. The day was a surprise Appreciation celebration in honor of the beloved Hornsby, put on by friends, held at Sinbad’s Restaurant on the Embarcadero.

Stunned by the outpouring of love, Hornsby expressed he had the best friends in the world! Yes, he received his flowers that evening while he could STILL smell them! Read article @www.beyondchron.org/news/index.php?itemid=10094. Sadly, the Legendary HALFNOTE Jazz club bartender passed peacefully at his San Francisco home, Sunday evening, August 19, surrounded by family, friends, and his lady Diane of 20 years.

My last conversation with Lionel, as I would prefer to affectionately call him, was upbeat – a remarkable, courageous man; always positive, never revealed to friends how sick he was. The cancer slowly wrecked havoc over his body, but a smile always parted his lips, until the pain became unbearable, administered morphine.

Lionel’s posse, about 15, mostly men, gathered every Wednesday during the Happy Hour, at the Page Bar on Divisadero and Page Street, owned by BOB WAITE who welcomed the group and became a special friend to Lionel. The Page was a meeting place started by Lionel, to discuss current happenings, and old times – all retired. The Wednesday following his death, the group gathered to toast their friend in fond remembrance. Lionel’s son KIRK HORNSBY and his wife, and Diane were there.

My prayers go out to the family and Diane, in their time of loss. Lionel did it HIS way in lessening the pain of his soon departure.

IRONIC, HALFNOTE owner HERMAN WARREN flew in town from L.A., Monday, to celebrate his birthday TODAY with a few friends who will gather in South Beach (AT&T Park area). AND FINALLY he will start filming a documentary about his famed club, interviewing many of us who remember the spot, 1965-1971. Lionel was one of the popular bartenders, as was BILL WILLIAMSON (within a month of the tribute at Sinbad’s, Williamson passed, here pictured with Warren (far left), Williamson (c) and Lionel (far right).

The recent performance of AL JARREAU and GEORGE DUKE at Stern Grove (check @www.beyondchron.org/news/index.php?itemid=10401) seem to spark Warren into action; especially in light of their LIVE CD recording “Live at the HALFNOTE 1965, Volume 1,” produced by Jarreau in memorable tribute of the club where they started. The HALFNOTE was SPECIAL! I WAS THERE!