“I Heard That” — The Last Supper at Powell’s Place 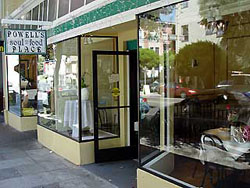 The Last Supper was served at Powell’s Place yesterday afternoon at 3:00. Rev. Amost Brown and the Task Force lost the battle to save Emmit Powell’s Soul Food Restaurant located in the Fillmore Center!

At the community meeting held with Representatives of the Fillmore Center on October 23, the fiery preacher promised to come up with a plan and $125,000 needed to settle Powell’s arrears within 10 days to avoid eviction which was long overdue! November 6, the day of truth, The Task Force delivered their plan, that offered $60,000 to The Fillmore Center management. The decision to accept or reject came Monday November 12! In essence, no deal!

Laramar management Services, owner of the Fillmore Center, would enforce recovery of the property this morning! Heard the Sheriff department will padlock the doors! And as of this writing, Tuesday
morning, the City preacher plans to protest!!! I can hear him singing the old gospel hymn, “Ain’t Nobody Goin’ to Turn Us Around!” Everybody say AMEN!!!

Ironic, 1300 on Fillmore, within eyesight of Powell’s Place, celebrates its Grand Opening tonight! For Jazz lovers and those who like nightclub action, myself included, 1300 On Fillmore is DA PLACE to meet and greet, to remember personalities who once frequented popular Black clubs in DA ‘MO, and those who have bit the dust! Last Friday night (TGIF) was the case!

The gorgeous earthy decor of 1300 restaurant and lounge took many of us back in memory to the era of Black Society and the Fillmore district – good times, both economically, socially, during the 40s, 50s, and 60s until the bulldozers representing gentrification drove us out!!!

Old timers like Ulysses Crittendon, retired doorman, thrilled to see faces he remembered on the revolving video screen over the bar, he remembered; Julius Banks saw his sister in a group of pretty ladies, and Nash, sharply dressed, captured seated with fellows at a popular bar (there were many). Famous Fillmore Club photographer Hubert Lewis, Jr., covered savvy personalities who hung out, there that evening showing color snapshots.

Surprised to see Rev. Amos Brown, seated in the restaurant with African inspired Guru Tibiti Mtambusi, and Charlie Walker (would have thought Charlie, once a big time trucker, would have been out on the beach to help clean up the oil spill in the Bay caused by the container vessel, the Cosco Busan).

LEST WE FORGET…November 1978 is the month remembered in San Francisco history as a series of tragic events – the assassination of San Francisco Mayor George Moscone, and San Francisco Supervisor Harvey Milk, both killed November 27 at City Hall … and November 18, the horrific Cyanide-laced grape punch massacre of 900 unsuspecting black folks who believed in Rev. Jim Jones, leader of the People’s Temple based in the heart of the Fillmore, once on Geary Street where now the site of a U.S. Post office!

Many Black elderly seniors, resident of the Fillmore who were members of major black churches before finding something Rev. Jones had to offer! There’s no reminder of the Temple left, and no memorial celebrations for those poor misguided souls!

September 1976 started penning ‘I HEARD THAT’ column for the Sun Reporter Newspaper, based in the Western Addition, a time when Rev. Jones was glorified by San Francisco politicians!

Every anniversary major news media outlets sought out Fred Lewis who lost the most – believe 30 relatives that included his wife, and children who slipped away while he was at work (a butcher at Petrini’s then on Fulton and Masonic in the City) to follow Jones and members to Jonestown, Guyana. His heart burdened, carried on, remarried. He died in San Francisco May 14, 2003. Attended his
funeral.

Fred’s niece Rev. Jyona Norwood of L.A., has tried to raise money to get a Memorial tribute erected in the Lower Fillmore with names of families and children who died, most from the Bay Area, yet to be erected.

THE PASSING OF A PRINCE

Eugene Prince Coleman passed in this City, October 26 – after months fighting the pancreatic cancer that finally caused his death. He was 70. A dedicated community activist, an exemplary employee of the City and County of San Francisco from 1984 to 2006 when he retired, then Deputy Director of the Mayor’s Office of Community Development.

The Prince was loved and respected by all; he died gently listening to the jazz music that floated up from Fillmore Street through the open window of his apartment.