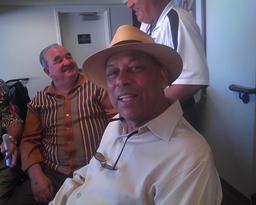 The late Oakland Raider owner AL DAVIS is somewhere up above, hollering, JUST WIN, BABY! If only temporary, the team has forgotten how to Win! However bad the Raiders performed these past 0-2 season opening games, fans, like myself, keep hope alive!

AH, the 49ERS! Two weeks in a row SWEET victory for the 49ers, and coach Jim Harbaugh who has ignited a new team playing spirit! Went into Lambaugh Field, shocked QB Aaron Rodgers and The Green Bay Packers!

Happy to see Crabtree play the role he was hired to do when 49ers drafted him in 2010. Last Friday, Crabtree celebrated his 25th birthday. My interest in the wide receiver began during his stellar senior year at Texas Tech, Lubbock, TX.

Hey, the San Francisco GIANTS are FIRED UP in it’s October Quest to make the Play-offs – season end on the road in L.A. with the Dodgers, October 3; therefore few home games left – this week Colorado Rookies; weekend San Diego Padres, season end at home next week with Arizona Diamond Backs!

First Saturday of this month, out at AT&T Park for the last home game weekend series against the Dodgers, and a Matt Cain win. In the Press Box ORLANDO CEPEDA rapped with the scribes, that included myself – interested in his jazz record collection! Years ago we talked about our interest in the music. One of his favorite musician, legendary horn man Sonny Rollins, who appeared this month at Yoshi’s San Francisco. Shared, due to travel, he would miss the set.

Baby Bull, as he was affectionately called during his playing days with the GIANTS at Candlestick, is the Giants community Ambassador, visits inner-city schools throughout the Bay area talking to at-risk kids about the hazards of drugs and alcohol. Cepeda , inducted into the Baseball Hall of Fame in 1999, is recognized nationally for his humanitarian efforts as an ambassador for baseball and the San Francisco Giants.

August Celebrated my FIRST year living in the San Francisco Bayview District. And an extension of happenings to check out – seemingly keeping me close to the area. I love to hang out and listen to LIVE music! Before moving to the area, would drive from the southwestern part of town to enjoy Monday NIGHT LIVE Jazz at Dr. George Davis Senior Center (Yosemite and Lane, off Third); now within walking distance! BEST Monday night action in town! Space limited!

In the mix last Saturday, listening to The Reed Fromer Band. Fromer, lead vocals, keyboards, is one of the baddest male singers in Northern California whose vocal style and range inspires comparisons with Kenny Loggins, Michael McDonald, Aaron Neville, among others. The Plaza was full of life, with those dancing to the music, among them, BARBARA STEWART and CARLTON ‘DAN’ DANIELS. .

On September 29, 8 p.m. come out and SUPPORT a GALA Benefit Celebration in honor of the late RUTH WILLIAMS, that will bring out the beautiful, creative people, fashionably dressed, in Celebration of Life through the Arts, presented by The Bayview Opera House with Bayview Repertory Theatre Company, 4705 Third Street. Info (415) 824-0386.

The celebration brings back the kind of musical variety show that the Bayview Repertory Theatre Company, under the direction of the late RUTH WILLIAMS was famous for, hosted by Bayview Hunters Point native, Macy’’s Passport runway star and 2013 Cadillac Man, CHARLESTON PIECE.

The Celebration is produced by GEORGE ‘GROC’ WILLIAMS, Ruth Williams’ son. He has toured with MC Hammer and will perform with his band, Home Turf with Caraya Rose.

Ruth Williams’ accomplishments as director of the Bayview Repertory Theatre Company and her lead role in SAVING The Bayview Opera House Ruth Williams Memorial Theatre from DEMOLITION led to the renaming of the historic building in her honor on December 7, 1995.