“I HEARD THAT:” SPORTS AND POLITICS -PRESIDENT OBAMA FIGHTING THE GOOD FIGHT!… 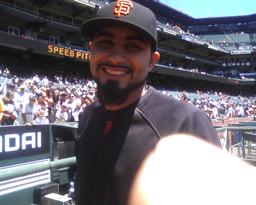 HOW SWEET IT IS!!! San Francisco GIANTS clinched their National League West Division title after defeating the Padres 8-4! My plans were to attend the game Sunday afternoon, thus, missed the Saturday night champagne celebration in the club house! Happy the team won at home! By the way, canceled out on the Sunday game. The Giants last home game tomorrow – will be there!

What is there NOT to love about the GIANTS! Unbelievable game, watched on TV, PABLO SANDOVAL shocked me and everyone else with that spectacular catch in the fourth inning, running head first over the rail of VIP field section seats, as he blew a gum bubble! UNFORGETTABLE!

Manager BRUCE BOCHY plays to WIN – PUSHED the team of young players to play hard! And the pitchers under “committee” rule – at times would anger me, when one run or walk given up by starting pitcher after 6th inning in particular, Bochy would trounce on the field to take him out, BUT he had the best game – it worked. Keep up the pressure Bochy – don’t let those guys get too relax!

Closer, SERGO ROMO, was my guy to take Brian Wilson’s place when the star closer went on the disabled list. Romo on the mound Saturday night, pitched last out, CF Al Pagan caught the ball to end the game – what a dynamic contribution he’s made since he came aboard this year and infielder Marco Scutaro.

BUSTER POSEY came back this season after devastating injury that kept him out of 2011 season. The slugger, dual catcher/ first baseman – SHOWED TRUE GRIT! Last weekend he received the WILLIE MAC Award, presented every year by WILLIE McCOVEY.

This season, pitcher BARRY ZITO got a grip on his game, embarrassing omission from 2010 Playoffs, will pitch in 2012 Playoff. Pitcher MATT CAIN has been my FAV since he first started with the Giants – AH, that PERFECT game! And action by no. 7, Gregor Blanco, a Willie May’s kinda’ catch; Hunter Pence, constant movement at bat, will get the job done. Giants GM BRIAN SABEAN made some good midseason moves when he signed Pagan, Pence and Scutario.

It’s been a wonderful season to watch these young players, in particular, overcame the problems that affected the team; CRUSHED when MELKY CABRERA , after dazzling us with remarkable prowess on the field, busted for substance abuse, suspended, disgraced! Prior to that, relief pitcher GUILLERMO MOTA suspended 100 games for substance abuse, BACK in time to help the team – lucky for him!

Possibility the Giants will kick off the playoff against the Cincinnati Reds; hopefully Manager DUSTY BAKER will be with the team – come back home! Dusty was not with the Reds when they clinched their division last weekend. He had been in the hospital treated for an irregular heartbeat, last I read, home in Cincinnati. Dusty celebrates his fifth division title as a manager – he has added two in the past three years with Cincinnati, two he won with the Giants, and one with the Cubs!

MORE SPORTS TALK. Sunday, overwhelmed watching football all day – , Minnesota Vikings UPSET the 49ers – 24-13! OK, give them a pass this time – show us what you got this Sunday against The New York Jets!

JUST WIN, BABY! GOD BLESS THE RAIDERS! They DID it! After much fussing, when joining a group at the Monte Carlo Bar and Restaurant during the third quarter, yelled my head off, cheering a Raider win over the Pittsburg Steelers 34-31 – YES!

LET’S GET REEEAL !!! The Fall Presidential campaign is in full swing until November 6., and your VOTE! This country is in serious trouble!!! Should the country change horses in mid stream??? Put a new team in the White House? Would Republican Presidential nominee Mitt Romney be better for the country???

Only the RICH could answer that question! Folks like the middle class, low income, seniors, families just barely getting by, and other cultures, would SUFFER under Republican rule!!!

If President Barack Obama is reelected, will the party of NO continue their vicious opposition, as they’ve done these past four years, to block him on whatever he proposes; for one a jobs program to get folks back to work; especially in construction, rebuild the infrastructure! Failure to reelect OBAMA will throw the country down the road to a full blown DEPRESSION???!!!

African Americans, and other minority groups, need to get out and support President Obama with their vote! Don’t stay home on November 6! The race will be close, Obama MUST win a second term! When reelected; he definitely will have to pull off the gloves, get tough, get the country rolling – jobs in particular! Will corporate America get off the pot, work with him???