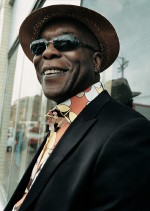 I JUS’ LOVE BUDDY GUY! At 74, The Blues master is STILL on top of his game – the BLUES game! Never in my wildest imagination would I have expected the wonderful experience of meeting the flamboyant guitarist/ vocalist, Saturday night, April 23, when standing in the aisle of elegant DAVIES Symphony Hall! Another SFJAZZ 2011 Spring Season Presentation.

RANDALL KLINE, Executive Director and Founder SFJAZZ, greeted the audience with inspiring words about the building of SFJAZZ new PERMANENT home and concert hall ( within the cultural corridor of Davies Hall) at Fell and Franklin, that will further the mission of jazz presentation and education. Founded in 1983, SFJAZZ has been expanding in its programming and season – now Spring (February – June; Fall usually late October through December), and economically good for the City! Wonderful to hear the music, a global mix, all year! Kline has been a BLESSING for Jazz fans!

There was no intermission after Nemeth’s performance, a brief pause, cries of BUDDY GUY, who slammed on stage hollering “Nobody Cares About Me but My Guitar!” Hip in white cap, forged into a long dialogue in husky lyrics, plucking the guitar, caressed against his body, screeching sounds, suddenly sweet, soft, almost a whisper, constantly walked the stage, backed by a great band. MARTY SAMMON FIRED UP the keyboards – powerful feeling – TOO COLD!

Buddy shared the first time he performed in San Francisco was 1967 – the year of the flower children, beatnik era in Haight Ashbury, acknowledged FRANK GALLAGER, a friend from those days, in the audience. Guy recorded “Left My Blues in San Francisco, “ issued in 1967. He performed “SKIN DEEP,” released in 2008, a slow groove, lyrics speaks of skin tone and RACISM (“underneath we are all the same”)..He revealed the song recalled real life experience living in the south – Lettsworth, Louisiana where he was born and raised. Moved to Chicago in the late 50s, where he owns a popular nightclub.

Buddy Guy is like SWEET TEA ( a 2001 recording), soothing in his delivery, singing about hardship and pain, love lost, upbeat. The essence of what the blues is all about! A fan since first hearing Guy several years ago in Reno, WOW! He literally TORE THE HOUSE OF DAVIES DOWN! As usual, in ending his act, left the stage through a side stage door to get close with his audience, mic attached to his guitar, singing, talkin’ and walkin’ the blues, rapped with a few folks along the way. NEVER thought he’d stroll down the runway where I sat (first seat ) . OH, MY GAWD, there he was, slowing coming down the aisle with the funk. ALMOST fell off my seat getting up, in position, cell phone camera posed, swish, hurried to free my hands, by then he was standing in front of me,

As mentioned, JUS LOVE BUDDY GUY – NO SHAME in my game when asked “May I KISS You?” Did just that, audience hollered! Foxy MISS VALERIE SHORE caught the action on her IPHONE, snapped several shots, as the moment lasted AFTER the kiss. She told me later “MISS THING, SORRY DIDN’T GET THE KISS! “ I was trembling like a LEAF IN THE BREEZE! The following morning, Easter Sunday, when checking E-mails, there were the pictures! Thank you lady for memories of that night when meeting my FAV bluesman! The REAL DEAL! BUDDY GUY STILL HAS FIRE IN HIS BELLY!!!

Easter Sunday evening hung out at the STANDBY CLUB with NOEL HAYES, KPOO Radio station WEDNESDAY morning BLUES JOCK who books LIVE Blues at the South San Francisco roadhouse club – LOVE THAT NEON SIGN! Sweet soulful guitarist DANNY CARON was the headliner, joined by a swinging outfit! He performed with the late CHARLES BROWN, and was his musical director, until his passing! Mesmerized by Caron’s passionate, sweet flair – for me, so far the BEST act at the Standby !

Last SUNDAY afternoon over at the GLEN PARK FESTIVAL, held in small downtown commercial area where Glen Park BART station is accessible, and homes abound in the tight intriguing hilly community (newly installed District 8 Supervisor SCOTT WIENER’s district, and where Interim-Mayor EDWIN LEE and family resides.). Wonderful afternoon; basked in the warm sunshine, listened to the swinging sounds on the main stage (Diamond and Chenery streets) – honky tonk flavor of MISISIPI MIKE WOLF (that’s how he spells it) Band, and lovely VALERIANA and the Cincopaters giving up Latin rhythms and dance music – a lil’ Motown mix – they were good! Mingled with festival-goers, cheered by the laughter of playful children; observed the many booths selling art, jewelry; enjoyed LUMPIA (SOOO good) from HAPA SF, Modern organic Filipino cuisine, served from the Filipino mobile van, parked at Diamond Street (closed off).

Conversed with a few folks, that included: LINDA PARKER PENNINGTON, Fillmore Jazz Heritage Center, while her young child enjoyed the JUMPY houses; vocalist DOROTHY LEVITZ (on her way to buy a book from local bookstore Bird and Beckett, that features an array of live music, poetry reading; HEY, former Glen Park Supervisor BEVAN DUFTY, the “FIRST” TO JUMP IN THE MAYOR’S RACE, campaigning, responded, when I said the field is over crowded, not suggesting he should drop out, in JENNIFER HOLIDAY FLAVOR, stated “I’m NOT quitting! “