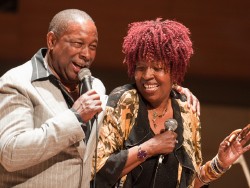 Sunday evening, the San Francisco Conservatory of Music Concert Hall rocked with the swinging sounds of dynamic Jazz and Blues vocalist FAYE CAROL and Quartet, and the smooth styling of Jazz singer JAMIE DAVIS and Quintet in what was another stella SFJAZZ double bill offering! Both Carol and Davis, Bay Area treasures, have traveled beyond these shores. Davis headlined in the Count Basie Orchestra from 2000-2003; his smoky croon similar to Joe Williams, Johnny Hartman.

Diva Carol’s powerful pipes and Blues swagger are in the tradition of Dinah Washington, weaved into her unique vocal tapestry. Sunday night I would have to say she captured NINA SIMONE – STUNNING, when singing “My Name is Peaches” captured Nina’s spellbinding spirit!

Davis put the POTS ON THE BURNERS, as he can do, mixing it up with Jazz in different styles, opening with “Night and Day,” Strayhorn’s “Lush Life,” rolled into a foot pattin’ BLUES flavor tune, ended with Stevie Wonders’ “Isn’t she Lovely”. The performance backed by multi-instrumentalist RON BELCHER (vibes, sax), GLENN PEARSON on piano, a fine young gent on bass, and percussionist LARRY VANN.

After one number, Miss Carol kicked off her heels, getting comfortable, delving into an upbeat Dinah Washington number, moved on into a song about HARD KNOCK LIFE, swinging Billie Holiday style “What a Lil’ Moonlight Can Do,” getting down with the BLUES, warning her man to watch out “Before My Love Comes Down.” The lady will wear you out – with her sassiness, high energy; dagger like long manicured nails flashing as she moved across the stage, mike in hand, at times SCATTING BEBOP style keeping up with her righteous band – daughter SISTA KEE on piano, MARCUS SHELBY (Thelonious MONK flair in fashion), JEFF MAR on drums, and HOWARD WILEY blowing sax. GIRLFRIEND topped it with her NINA SIMONE piece – She should do a Nina tribute segment during her club appearances.

SIZZLING’ FINALE when Davis joined Carol on stage – a RIOT – doing a medley, “Rather Drink Muddy Water,” Carol hollered, JAMIE “ROCK ME LIKE MY BACK AIN’T GOT NO BONE!” Just a terrific show!

The San Francisco Conservatory of Music Concert Hall, located at 50 Oak Street, near Van Ness, open venue, tall ceiling, designed to hear and appreciate good music. The building embrace several floors. Originally located on Ortega near 19th Avenue, moved to their new site in 2006. The ONLY school of its kind on the West Coast, offers degrees in orchestral instruments, Chamber music, composition, and conducting.

Faculty include members of the San Francisco Symphony and Opera orchestras, as well as many internationally recognized soloists, chamber musicians, and composers. I might note stellar recording musicians Pianist GEORGE DUKE and trumpeter EDDIE HENDERSON are graduates of the school.

SFJAZZ founder RANDALL KLINE is ON THE MOVE! WONDERFUL news to hear plans to build the FIRST permanent home, and the West Coast’s FIRST facility dedicated to Jazz music and education, to be located in San Francisco’s Hayes Valley neighborhood, corner Fell and Franklin.

Kline started JAZZ IN THE CITY (changed to SFJAZZ) in 1983 FALL season, which filled the void on the San Francisco jazz scene; especially when most major Jazz venues had closed. In its early inception, under the umbrella of Jazz in the City, Kline presented an annual festival and featured premier artists in a seasonal program. For the past 10 years, the festival has expanded to a SPRING Season Concert. which kicks off in March, ends in mid-June. The Fall season, about October or November.

This writer has supported Kline since his first concert; Now in its 28th year, THRILLED over the news! JAZZ is my FIRST LOVE!

HEADS UP! Will be off a few weeks, traveling to SAN ANTONIO, TX for a FAMILY REUNION, and visit LACKLAND AIR FORCE BASE – MY ALMA MATER!