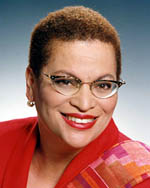 The San Francisco Black Community in particular, are proud of Dr. Julianne Malveaux, native San Franciscan who many have watched grow up, excelled in her education to become a renowned economist, writer/columnist and fighter for Women Rights! March 26, 2007, the Bennett College for Women Board of Trustees announced the appointment of Dr. Malveaux as the 15th President of Bennett College. Her term started June 1, 2007 She replaced dynamic Dr. Johnnetta Cole who after many years of strong leadership, retired to pursue other ambitions. An entourage of San Francisco friends and supporters traveled with family members to Bennett for the Inauguration.

Those same supporters and others welcomed her in San Francisco last Friday evening at the “Welcome Home Reception and Fundraiser for Bennett” held at the beautiful Lush Life Gallery located within the Fillmore Heritage Center, coordinated by Ilona McGriff and Clementine Clarke. Received an invite, happy for the opportunity to greet and congratulate the brilliant lady. Dr. Malveaux has come a long way since I first met her in the late 80s at a political fundraiser for Chicago Congressman Harold Washington, at the home of Attorney Melvin and Lia Belli (both Belli and Washington since deceased) . Malveaux looked well, trim in a colorful light two-piece suit, greeted the many guests happy over her appointment, and of course check books in hand!

The Gillettes – Maxwell and Frankie; Dr. James Lance Taylor, Associate Professor Politics, University of San Francisco; wonderful to see Gayle Orr-Smith, Emergency Preparedness Coordinator, SF State University; a gentleman from the OSIRIS Coalition (a community collaborative of individuals and organizations dedicated to the preservation of the social and economic sustainability of the African American Community in the Greater Bay Area). The group will present a community forum on the State of Black San Francisco, June 28, 9 a.m. – 12 noon at West Bay Conference Center on Fillmore at Eddy. Info: (415) 252-0949;…

Belva Davis-Moore and daughter Darolyn Davis – unsuccessful in her attempt to be seated on the Democratic Central Committee as was Commissioner Linda Richardson, San Francisco Human Rights Commission, there that evening. NOW there are NO Black representation in 12 or 13 AD!!!; Effie Lee Morris, chic in suit and hat; Dr. James McCray, Harrison Chastang, radio station KPOO ( Next Monday night a fundraiser will be held for the station at Yoshi’s…Legendary Fillmore Slim will be the headliner); 1300 on Fillmore’s illustrious Chef David Lawrence stopped in to greet Dr. Malveaux and guests; my favorite musicians performed for the event led by Dee Spencer on keyboards, Eric Hunt, bass, and the fabulous rhythmic percussionist Barbatunde Le.

Briefly to enlightened those not familiar with Dr. Malveaux – she received her BA and MA Degrees in Economics from Boston College, and earned a Ph.D. in economics from MIT. She is President/CEO of Last Word Productions, Inc., a multi media production company headquartered in Washington, D.C.

In the first 100-days of her administration, Dr. Malveaux launched Bennett Cares: Life After Revitalization. This new strategic effort is critical to the survival and sustainability of Bennett College. Bennett Cares focuses on five critical areas: Capital Improvements, Academic Excellence, Restoring Core Values, enhancing the quality of student life, strategies for sustainability. The annual fund drive will effectively address the components in the Bennett Cares Initiative.

SFJUNETEENTH Celebration will liven up Civic Center this weekend; the second time the annual event has been removed from its beginning roots in the Fillmore Western Addition!!! Late 80s held at the Civic Center and was quite successful! Blacks in Texas have celebrated Juneteenth since the abolition of slavery! I will be in the State of Texas on June 19th, the date in 1865 slaves in Texas received word they were FREE! Juneteenth has traditionally been recognized on that date throughout Texas, especially Galveston!

MONDAY night on DA ‘MO at 1300…groovey trumpeter Earl Davis and his Unit, and featured vocalist lady Mem-phis (I call her sweet Candy!) were layin’ it down in the lounge much to the enjoyment of Archbishop Franzo King, St. John Coltrane Church…Barbara Frisone…songbird Denise Perrier who just returned from her annual gig in Russia – they love her!;… over at the Lush Life Gallery…the BWOPA affair – Reverend Arnold Townsend flanked by two pretty ladies, one Alicia Wang of DNC – believe she’s running for a City political office; and swinging Godfather LeRoy King.

Yoshi’s San Francisco was OFF DA HOOK…Blues crooner Jamie Davis, backed by legendary Fred Berry and his terrific star-studded Big Band, tore the roof off the sucker! Davis is one hellavu’ exciting showman; plenty of kick to his performance in deep Lou Rawls flavor, “You’ll Never Find Another Love Like Mine,” “Nature Boy,” up beat from old Nat King Cole’s rendition; paid homage to the Blues “Alright, You Win!” so much more to make you feel good – alive! In the audience were: John Handy and Del Anderson; BJ Poppa’, Peter Fitzsimmons, seated with lovely Denise Bradley, was living the LUSH life!!!; pretty Barbara Rodgers, stunned many of us when she retired from CBS 5-TV, enjoying her retirement! Told “Momma B” we must do lunch when I return from Texas!

HEY, IT’S NICE TO BE NICE AND TO ALL OF YOU OUT THERE … LOOK FOR ME … I’LL BE THERE …
E-Mail Rochelle at iheard@earthlink.net.