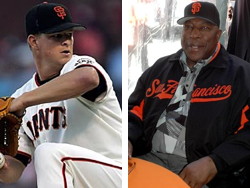 TAKE ME OUT TO THE BALL GAME! San Francisco GIANTS Season Home Openers are a ritual for me. Last Friday, happy the weatherman was wrong in predicting rain around game time, which started at 1:35 p.m. The weekend games vs Pittsburgh Pirates, celebrated a SPECIAL Reunion of the 1962 Giants team 50th Anniversary of the FIRST World Series in San Francisco featuring the National League Champions and New York Yankees who won; painful! Prior to the game, 12 members of the 1962 team joined in ceremony on field – included Alvin Dark, Gaylord Perry, Willie McCovey, Willie Mays, Felipe Alou. The Opener commemorated over half a century of memories, good and bad.

MATT CAIN shut the Pirates out (Relief pitchers got a day off). 5-0, his fifth career shut out! Matt was in control! Pirate’s pitcher JAMES McDONALD prevented him from having a perfect game when in the 7th inning, slammed a base hit. Can you imagine a PITCHER blocking his game! Cain will be on the mound this afternoon.

So much was going on, never did get on the field for the ceremony, nor in the locker room. When arriving to AT&T Park, through the media gate, stopped in Giants VIP Pre-Game Party held under a white tent, packed with guests sipping drinks and nibbling food. Stretch – WILLIE McCOVEY, all smiles, joined at a table with his lady and caregiver, greeted guests, signed autographs. Of course DA MAN – Giants CEO LARRY BAER circulated, introduced a few players who were on that ‘62 team.

FELIPE ALOU, handsome in suit, looked well; expressed my condolences over the loss of his brother MATTY ALOU; Again, a chance to converse with REV. CECIL WILLIAMS and his wife, JANICE MIRKITANI – lots of laughter, joined by FRANCEE COVINGTON, former Commissioner on the defunct San Francisco Redevelopment Agency Board – love her positive smile and energy!

Man about town, former Mayor, Chronicle columnist, WILLIE BROWN, Jr., in HIS World signing autographs, that included a baseball, and posing with several very fair- skinned ladies. Interrupted the scene, when I stretched out the back of my hand, smiling, “Willie, would you sign my autograph?” – he immediately kissed the back of my hand! Yeah, I saw those burnt color orange shoes he was wearing!

HARRISON CHASTANG, radio station KPOO’S sportscaster, busy covering the scene through his camera lens – CONTRIBUTED the photo of McCovey – Thank you my friend!

Game time settled in the Press Box, seated next to GIANTS INSIDER – ANDREW BAGGARLY, of csnbayarea – HEARD so much talk about his TWITTER ! The handsome young man, sharply dressed in dark blue suit, shirt, pretty tie – hat by his laptop, steady typing a blow by blow report, in between an occasional conversation with me.

KUDOS to young trumpeter, “KID” GABRIEL ANGELO, flashy in orange bow-tie, suit, sporting a hat. performed during the 7th inning stretch “God Bless America” and “Take Me Out to the Ball game”. WATCH OUT for the kid – HEARD, you can look for him outside San Francisco’s 5th and Mission Parking lot.