“I Heard That”: S.F. Board of Supervisors Celebrate Black History Month … 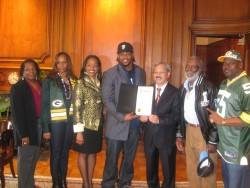 WONDERFUL! In honor of Black History Month, at its regular meeting, February 15, the San Francisco Board of Supervisors chamber was crowded with members of the Black community in particular. All eleven Supervisors honored an individual or group for their contributions to the community; each presented a Black History Certificate. Observed the celebration on the City station SFGTV. Three acknowledgments caught my attention!

An outcry of joy when District 10 Supervisor MALIA COHEN recognized handsome DESMOND BISHOP, Linebacker with The Green Bay Packers (No. 55) who was born in Bayview Hunters Point, July 24, 1984. His parents, DENNIS and SHERRI BISHOP; his 80-year old grandfather CURLEE BISHOP, Sr., (still reside in Bayview) and family members, stood proud! Tears welled in my eyes to see this outpouring of pride. BIshop is a HOME TOWN HERO, a success story, something to cheer about!

Let me give SHELLY TATUM his PROPS! The energetic Entertainment promoter and community activist orchestrated the happening with Supervisor Cohen for his longtime friend, who played earlier this month in Super Bowl XLV, CHAMPIONS, Packers defeated the Philadelphia Steelers 31-25 (much to my disappointment). Board President DAVID CHIU boldly stated the 49ers should bring him home to San Francisco! I AGREE! By Proclamation, The Day PROCLAIMED February 15, DESMOND BISHOP DAY in San Francisco! RIGHT ON!

TINISCH HOLLINS and CAMILLE DAWKINS, Mayor’s Liaison to Districts 5, 10, and 11 and Mayor’s Office of Neighborhood Services, played an important role to help pull off the event.

A Brief 411 on Desmond Bishop who attended Visitacion Valley High School before going to high school in Fairfield (of course played football), then returned to San Francisco to attend City College, played college football at UC Berkeley. DRAFTED by the Packers in the sixth round of the 2007 draft.

GIVING BACK TO THE COMMUNITY, Bishop started the Desmond Bishop Football Camp, and participates in program to help kids to be healthy and learn to read, and including the Boys and Girls Club.

I was deeply touched by SUPERVISOR ROSS MIRKARIMI (D-5) recognition that honored BOARD members of the KING/GARVEY Housing CO-OP (Martin Luther King, Jr., and Marcus Garvey Square) located in Western Addition A-2 Redevelopment area, bounded by Eddy, Ellis, Steiner, Turk and Pierce St. It was one of the FIRST housing development to be built in the A-2 redevelopment projects, this was in the 1960’s. I remember well the opening of King/Garvey. Really nice! At the time, lived on Turk Street, above Divisadero.

Thanks to VALLIE BROWN, Legislative Aide to Supervisor Mirkarimi, at my request, information reference the award. I know the story well through residents who lived in King/Garvey.

The complex fell on hard times due to below-acceptable scores on its inspections by HUD and the fight that pursued. In 2005 HUD informed the Board the complex was in default for failing to abide by the terms and conditions of the section 8 Agreement to provide, safe sanity housing for the residents.

In 2007, HUD issued a formal notice to King/Garvey residents because of its failure to make any progress on the plans to correct the deficiencies at the development, formal Section 8 abatement proceedings would commence. IF carried out, it would have replaced a high number of residents. SAVED!!!

Rev. AMOS BROWN and community tried to help, as did Supervisor Mirkarimi but the King/Garvey Board members were deadlock and could NOT move forward! FINALLY LEVEL HEADS prevailed. That same year two new board members were selected; they forged a WORKING majority to move forward.

Supervisor Ross honored the four new members of the Board: LINDA YOAKUM, CARMEN JOHNSON, MARVA BROOKS, and 81-year old WARRIOR – ABRAHAM ‘ABE’ LANDRY, all were instrumental in leading the King/Garvey CO-OP community through the huddles to re-certifying with HUD. They worked as a team to secure financing to save and renovated this historic cooperative property; keeping the Section 8 subsidy intact and most importantly to ensure the community of King/Garvey was able to return to their homes once the renovation was completed.

I will ALWAYS have a SPECIAL feeling for the Western Addition – the place where I lived when first moving into the area during it’s lively history!

THE PASSING OF A SWEET JAZZ MUSICIAN – Legendary trumpeter and respected Jazz educator ALLEN SMITH passed February. 3, at age 85, District 3 Supervisor DAVID CHIU, President of the Board, presented a Black History Certificate to Smith’s son, PETER FITZSIMMONS, Executive Director, Lush Life Gallery on Fillmore, in recognition of his late father, a Fillmore Jazz legend. Chiu expressed Smith helped break the color barrier in NORTH BEACH clubs, during the 1940’s. The Supervisor noted this was his district, played a record selection that heard Allen’s sweet blowing on “The Folks who lived on the Hill”. WONDERFUL DAVID!!!

HEY, ITS NICE TO BE NICE AND TO ALL OF YOU OUT THERE … LOOK FOR ME … I’LL BE THERE …
E-mail Rochelle at iheard@earthlink.net