“I Heard That”: Riley Jameison Golf Tournament at Sharp Park! 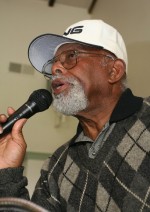 SHARP PARK GOLF Course in Pacifica is the focus of a fight by environmental activists who want the course CONVERTED into a HABITAT for the San Francisco garter snake and the California red-legged FROG!!! Golfers who play the course, and others, are fighting to petition the City of Pacifica to declare the course a HISTORIC LANDMARK – a designation aimed in part at environmental activists who want the course reduced from 18 to nine holes as part of a wetland restoration process. SAVE SHARP PARK!

I played my FIRST golf game at Sharp Park back in the early 1960’s. At least once a year, this writer hangs out at the Park! There are many golf tournaments put on locally, but, in my opinion, none as SPECIAL as the one San Francisco resident RILEY JAMEISON has been coordinating for 20 years at Sharp Park.

The Annual RILEY’S SENIOR SWINGERS SHOTGUN GOLF TOURNAMENT fledge an INTEGRATED field of over a 100 golfers the second Monday in June, followed by an Awards Ceremony and Dinner (the Chef knocks himself out laying out a feast – lobster, prime rib in particular; Lobster my choice!). Trophies awarded top winners; great prizes to golfers and raffle ticket holders.

The Weather usually beautiful, guys who’ve known each other for years, a chance to fellowship! Always a lot of robust joy during dinner. After 20 years, Riley, Founder/Tournament Chairman, announced June 14 would be his FINALE! The News saddened golfers who look forward to the event each year; as does this writer who has supported the tournament in coverage because Riley honors UNSUNG HEROES! Surprised when Riley honored me with a plaque and photo album captured with golfers through the 20 years; some passed on. Deeply appreciated!

JACK SCOTT, a consultant contractor, former owner of 6th Street Mission Bay Golf Driving Range, torn down in 2005 to make way for the Mission Bay project, is one of Riley’s supporters! Each year Scott participates and sponsors the Hole-in-One worth 5-figures – so far no one has won!

All is not lost! During the program, Scott announced his interest in continuing the successful Tournament, in Riley’s name, with LOIS KINCY, Coordinator and Riley’s right-hand lady who has worked with him all these years. Tearful when she took the mike, thanked Scott and golfers for their support, noting the end of an era, passing the baton to Scott and others who want to keep the tournament going!.

This year the golfing family recognized and honored Riley for his passion, commitment, a labor of love for the game, and to give his golfing buddies a good time, and all that he has accomplished. Players included: Rev. FRED HUBBARD, Executive Director, Western Addition Senior Center, (Fillmore and Turk), which the tournament benefits; Bay Area realtor MAX FABIAN; CLYDE HOLLIE (legendary san Francisco tailor during the heydays of the Fillmore); NATE JACKSON, President Bay Area Golf Club; members of the California Highway Patrol , San Francisco, participate each year. Riley is employed with the CHP. San Francisco. Photographer HERMAN QUAN is Riley’s official photographer, and captured the photo in this column!

At one time BLACKS could not play golf on public or private courses but could act as CADDIES! Times changed! Golfer CLARENCE BRYANT’S Historical notes in the program booklet noted Riley was born in the segregated south (Louisiana) on May 6, 1922. He came to California in the early 1940’s in search of a better life, and that included playing golf.

“In 1948 when the ‘Caucasian only’ rule was still in effect in the PGA constitution and by-laws, Bill Spiller, CHARLIE SIFFORD, MADISON GUNTHER and Riley decided to challenge that ‘rule’ at the tournament held in Richmond, California at the Richmond Country Club. Their protest was supported by the Attorney General of the State of California, and as a result, from that beginning BLACKS in the country was ‘allowed’ into PGA tournaments throughout America. Riley can legitimately be considered one of the forerunners in establishing a platform for the likes of Tiger Woods and other golfers of color.

“In 1968 Riley won the Director’s Club Championship at Lincoln Park Golf Course. He was the FIRST African American, and the ONLY one to this day to have his name inscribed on the trophy plaque. Riley has been right in the thick on the golf community for quite some time!”