“I Heard That” — Revival of the Fillmore Jazz District 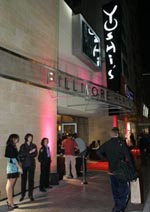 It’s no secret that the hottest area in town is The Fillmore Jazz District which has really sparked San Francisco’s famed Fillmore Street; especially between the blocks of Eddy and Geary where the nightlife is jumpin’ off the hook with entertainment, people walking, laughing, ready for a night out! Love it!

When the groundbreaking ceremony kicked off October 11, 2005 at the West Bay Conference Center, within a few paces from the vacant lot that would become The Jazz Heritage Center, musicians who played the famous Fillmore venues were recognized – John Handy, Mary Stallings, George Alexander, Allen Smith, Jules Broussard to name a few. Sadly, many did not live to see the reemergence of the area, to be on the scene at the Grand Opening of 1300 on Fillmore and Yoshi’s.

Pat Nacey kept the fire burning, for several years Jazz producer of the Fillmore Legends Recognition Awards held several years during Black History Month at The West Bay Conference Center until her passing in July 2003. Nacey, lovingly called The Sophisticated Lady, a woman of style, mother of Peter Fitzsimmons who carry on the tradition!

Fitzsimmons, appointed Executive Director Lush Life Gallery, located within the Heritage Center, and coordinator of the “Legends of Jazz Celebration” held Sunday afternoon, February 24, appropriately at the West Bay Conference Center, planned the free event to honor those fine diverse musicians who played the Fillmore, still alive, active, witnessed the vibrant surge that offer hope in keeping the music live, and work; not to be forgotten those who have passed on!

Wonderful program enhanced by a scene from the new play “The Fillmore Five: a Jazz Musical in Rhapsody” by award-winning playwright Marcus Gardley. Performance by the Village Project Kids and Handful of Players, accompanied by renowned multitalented Dee Spencer on keyboards. The play will Premiere in the Spring at Yoshi’s San Francisco.

The extraordinary Noah Griffin, always charming and delightful – a man of many talents, emceed the afternoon, introduced both Jazz Heritage developer Michael Johnson (savior of the district) and Fitzsimmons; two men who keep the dream alive!!! Noah shared he grew up in the Fillmore at 1110 Webster. A proud Black man, parents were active leaders in the community. Noah’s contributions are many, currently happy to pursue a singing career, and has a new CD, entitled “I Remember Nat: A Tribute to Nat King Cole”. Valentine’s Day Noah extended an invitation to attend his performance at The Mill Valley Theater in the City of Mill Valley.

Back on track – Fast becoming one of my favorite Supes, handsome San Francisco Supervisor Ross Mirkarimi whose District 5 include the Jazz center – he’s right for the times! Hip, cool, an activist for his community; especially efforts to cut crime, and at the scene of tragedy whatever time of the night. Foxy in his attire – gave the welcoming. He’s up for reelection in November, and should have no problems!

Nothing like being in the midst of musicians – a promise of good music and conversation! Legends who performed that day on stage, after receiving Certificates of Appreciation and Recognition, were: Frank Jackson, Allen Smith, Al Obidinski, vocalist Denise Perrier, Eddie Duran, John Handy, Akira Tana. A real groovy session!

Definitely an exciting afternoon to mingle with members of the Jazz community; some seldom seen after their playing days like smooth guitarist Junius Simmons and his lovely wife Helen Simmons (she’s pictured in a video scene featured on the prestigious legend wall at 1300 on Fillmore). Last time I saw Junius was back in the early 80s at Nate Thurmond’s The Beginning Restaurant when located on upper Fillmore, now Harry’s. A smooth guitar player, he fronted his own group, and also performed in The Frank Jackson trio, and Earl Grant when he played the Blue Mirror.

I lived in the area, frequented many of the spots and a few churches in the Western Addition; honed the early years of “I Heard That” when started writing for the Sun Reporter Newspaper in the mid-70s covering the Street scene, but well aware of the action before then! At the time Simmons was a distinguished member of The Uptown Church of Christ there on Fillmore and McAllister ( the same block The Blue Mirror and Manor Plaza Hotel once stood before gentrification of the area). I attended the church during an era of fine dressing; remember Mrs. Simmons, always a classy lady and knockout dresser, as was her husband; noticed they are still fashionable!

Speaking of the Blue Mirror – Fabulous legendary owner Leola King, joined by her handsome son Tony Taylor-King, acknowledged on the Honor Rolls for her nightclub which opened in the early 50s before I arrived to the City; closed in 1970 at the hands of Redevelopment as part of the Gentrification area. Lovely vocalist Denise Perrier dedicated the song “God Bless the Child” to Queen King – quite touching!

Good news! Leola was honored by the San Francisco Board of Supervisors, Tuesday, February 26, introduced by Supervisor Mirkarimi whose district she lives and rightfully so, for indeed the smart business woman is to be honored for providing a beautiful place in the Fillmore, booked R&B and Blues artist; in the late 80s opened her last club “Goldie’s,” when located across Van Ness on Post – fabulous trappings! The Queen, a survivor, has not given up her fight with the San Francisco Redevelopment Agency for a piece of the pie! She may have lost the most during the gentrification of the Fillmore!

Back on track! The Godfather – Commissioner LeRoy King, member San Francisco Redevelopment Board, accompanied by his son, worked hard and long in the fight to rebuild the area whether for affordable housing or a market place. After the concert, as we strolled to the Lush Gallery for the VIP Reception, remarked to King we were lucky to finally see the new Fillmore and its diverse culture and community come together.

Frank Fischer forgot to bring his horn, while on stage quipped a joke that gave the afternoon humor. Fisher is one of the legendary Fillmore musicians featured on the front cover of the highly acclaimed book “Harlem of the West” about the San Francisco Fillmore Jazz Era, featured with Handy, Pony Poindexter and John Coltrane – he and Handy the lone survivors.

Also In the audience: Dr. Herb Wong, renowned Jazz educator, producer Palo Alto Jazz; saxophonist Madeline Eastman wife of Eddie Duran; Fillmore barber Reggie Pettus who saved many of the vintage pictures you see on 1300 on Fillmore Restaurant video wall and in the Harlem book. Reggie was able to obtain the pictures that were displayed on the walls of Red’s (Powell) Shoe Shine Parlor on Fillmore of great personalities who frequented the many clubs, almost lost when he passed, thanks to Reggie, now forever a part of history!; also caretakers of history, renown artist/Photographer Eugene White and his lovely wife Lynnette White; and vocalist Lady Sunrise.

I’m not sure if Photographer David Johnson, one of the great Fillmore and Bay Area photographers, was on the scene, did not see him, but my sincere condolence go out to him in the loss of his wife Lucy Johnson who passed in February.

There were many who had a hand in the coming of the Jazz District, who fought for years, supportive, unfortunately did not live to see its birth – as the theme “Birth of the Cool”. In particular the late Sue Bierman, former San Francisco Supervisor passed before the realization of the dream; Fillmore community activists Mary Rogers, and the late Naomi Gray.

Making the Rounds – One would not expect to walk into Biscuits and Blues Nightclub and be blown away by Jazz singer Kenny Washington, raising the roof with the oldie R&B groove, “How Sweet it is to be Loved By You”! Sunday night Washington was a featured guest with guitarist Lloyd Gregory and his Unit, joined by the baaad blowing saxman Robert Stewart who returned earlier that evening from New York working with Wynton Marsalis. Oakland retired Municipal Court Judge Horace Wheatley, a jazz lover from his heart, was in the audience.

I can find my way out of the City and DA ‘MO! Sunday in Oakland to enjoy The Vibraphone Summit at the Oakland Public Conservatory of Music, downtown Oakland. Swinging, magnificent presentation of 3 notorious vibraphonists: Roger Glenn, Yancie Taylor and Herb Gibson – off the hook!

HEY, IT’S NICE TO BE NICE AND TO ALL OF YOU OUT THERE…LOOK FOR ME…I’LL BE THERE…