“I Heard That”: Remembering Lena Horne 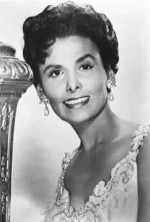 Legendary Jazz singer LENA HORNE, known for her signature song “Stormy Weather,” caught the ‘A’ train on May 9 at the New York Presbyterian/Weill Cornell Medical Center. She was 92. Last Friday, hundreds of mourners gathered in an upper East Side church to celebrate the life of the Lady and her music.

Lena, as I prefer to call her through outthis piece, spent a lifetime battling racial and social injustice; she broke barriers in her life, when “colored” was the term to identify African Americans considered second class citizens! She struggled through the disrespect given her as a Black STAR in the ugly face of SEGREGATION!

This gifted, sultry singer and actress, was outspoken about the conditions of Black America. She wrote articles on her struggles in the entertainment industry for a Black newspaper. Since a young child, always admired her beauty, colgate smile; her strength and courage to face the trials and tribulations in her life.

During the 70s, met this beautiful lady when she appeared at the famous Circle Star Theater in San Carlos, in what was a MAJOR Jazz event that headlined my teenage idol – BILLY ECKSTINE! Charmed by her gracious warmth, and smile. Accompanied by her manager and companion, the late HARRY CAREY, a flamboyant gentleman and TOP waiter, who traveled in the elite L.A. social circles where Lena lived many years, introduced us backstage. Somewhere in my collection, stored away, have a picture I captured of her.

When growing up as a young child in Asbury Park, New Jersey, Lena was OUR BLACK MOVIE STAR; remembered going with my parents to a movie theater to see Lena in the 1943 film “Cabin in the Sky” and “Stormy Weather” (starred Cab Calloway, and other black personalities of the day). These were RACE films, where Black were portrayed as servants – NOT LENA!

The all Black cast; audience BLACK (a time when the theater was segregated. Black folks relegated to an upper balcony). It was a big thing to see the slender HIGH YELLAR’ STAR – sensuous, sassy, elegant southern belle flare to her voice. Through the years, mellow in her delivery of a ballad, romantic. FIRED up singing ‘I’VE GOT A RIGHT TO SING THE BLUES!’ The lady experienced the Blues in her life.

Lena was a Pioneering African American Actress, FIRST Black woman to be signed to a long term contract by a major Hollywood studio, MGM, at a time when Blacks were considered SECOND class citizens. She paved the way for generations of Black female superstars. Hollywood was not easy nor kind to Lena, who had the advantage of being fair-skinned ( dark complexion actresses not hired.). She was the COLORED Queen!

Hollywood REFUSED to give her any starring roles in “White’ films, other than the classic RACE musicals, like “Stormy Weather,” instead, studios cast her in singing roles, often as a SALOON songstress that easily could be cut out of Southern screening.

In 1934, at age sixteen, Lena came to fame in Harlem’s COTTON CLUB (closed in 1940) located in the heart of the BLACK COMMUNITY, when she joined the mike chorus and became a nightclub performer, before moving to Hollywood. The club’s JIM CROW policy barred black customers – WHITES only! Lena, though employed, could NOT use the powder room – for WHITES ONLY.!

Lena was a remarkable performer BUT also a CIVIL RIGHTS ACTIVIST, involved. Outspoken about Black causes, conditions, campaigned for Social and Economic justice! A celebrity who was active in the NAACP. Due to the RED SCARE (era of McCARTHYISM) and her left leaning political views, she found herself BLACKLISTED, unable to get work in Hollywood (along with other top stars), returned to her roots as a nightclub performer. Ban Lifted in later years.

In August 1963, Lena participated in A. PHILIP RANDOLPH’S “March on Washington for jobs and FREEDOM,” standing near the Rev. MARTIN LUTHER KING, Jr. as he delivered the “I HAVE A DREAM” speech. Born 12 years before King, she grew up in a community where Randolph and other young socialist campaigners were making some of the first loud demands for racial justice. After appearing at the March, Lena used her singing talents to raise money for the civil rights movement and other causes.

In the spring of 1963, Lena traveled South with MEDGAR EVERS and other civil rights campaigners. Tragically, after the assassination of Evers, Lena joined Harry Belafonte, Dick Gregory and others at a meeting with Attorney General Robert F. Kennedy to reassure the Kennedy Administration to become more active in fighting to stop violence in the south and to end segregation!

Born Lena Calhoun Horne on June 30, 1917, in Brooklyn, New York, Lena’s stellar life was quite profound, on and off stage. The LADY and her music expanded into the new century, recorded with artists like Tony Bennett, Harry Belafonte; honored with many awards; a beautiful spirit who made a difference. Lovers of Lena Horne’s music, witnessed many SEASONS in her LIFE!