“I Heard That” — Obama Keeps Ba-ROCKIN’! 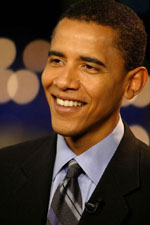 9/11 was a blow to this country, left us depressed; devastated that we can no longer move about freely – constraints especially noticed when traveling, entering airport security. Democratic Presidential candidate Senator Barack Obama’s time in history is by no accident; he leads a movement of change and hope; new leadership at a time that is needed after 8 years of Bush! Obama’s rally call has sparked new voters; especially the young who seemingly had nothing to hope for but to be called to War – return home, lives shattered! Keep on running my Brother!

Exciting time in history see a Woman – Senator Hillary Clinton and a Black man run for the highest office in the land. Amazing would be the word! Obama leads a movement of change and hope, sweeping the country across all racial divides, winning Primaries – this past weekend a sweep! The competition promises to go to the Democratic Convention in August! Democratic Super Delegates will be called upon to make a morale choice of who should lead the Democratic Party nomination!!! That’s the bottom line!

Last Wednesday afternoon stopped in Marcus bookstore at the time Manager Karen Richardson was in the process of sorting a delivery of new books. Immediately attracted to Shelby Steele, the Award-winning and Best selling author of The Content of Our Character, new book entitled A Bound Man: Why We Are Excited about Obama and why He Can’t Win !

Purchased a copy, yet to get into the pages but the overview on the inside jacket cover attest Steele feel Obama is caught between the two classic postures that blacks have always used to make their way in the White American main stream: bargaining and challenging. Explained Bargainer’s strike a “bargain” with White America in which they say, I will not rub America’s ugly history of racism in your face if you will not hold my race against me. Challengers do the opposite of bargainers. They charge Whites with inherent racism and then demand that they prove themselves innocent by supporting Black – friendly politics like affirmative action and diversity!

Steele suggest that Obama is too constrained by these elaborate politics to find his own true political voice. Steel’s book will surely generate dialogue between those of political and scholarly thought!

Check it out – Obama won a Grammy Award in the Spoken-Word category for his book “The Audacity of Hope”.

From politics to BASEBALL! Last Thursday Giants Hall of Famer Willie “Stretch” McCovey celebrated his 70th Birthday, and look like the boys of summer ready to play ball! Still exhibit the enthusiasm for the game of baseball, retired in1980, now serve as Senior Advisor to the team.

Many a day cheered for stretch who was a hella’vu’ first baseman; those were the good old days of Giants players we loved since the team, then New York Giants, came West in 1958, played Seals Stadium on 16th and Bryant area, now a shopping mall! Moved to Candlestick park, then on to their current home at At&T Park. McCovey became a Giant in 1959 – tall, lean an instant star, thrilled when he’d hit those homers out of the Ball Park! Never imagined this girl from Asbury Park, New Jersey, a fan since a young kid, watched the team, then New York Giants, and Brooklyn Dodgers on TV – Jackie Robinson was the hero to Black folks! Came West!

My adventure with the Giants started as a Saturday only ticket holder; years later took my son to the games when he was about 7 years old ; we would sit in the General Bleacher seats behind Centerfield and Willie Mays – a time Black attendance was high; especially in the bleachers!

Ah, fond memories of those days at the ‘stick and as a columnist – lucky to meet and capture in my camera lens, The Say Hey Kid – Willie Mays (covered his retirement); Pitcher Vida Blue horse-drawn carriage wedding, met Barry Bonds; so many thoughts more than space will allow.

McCovey spent part of his birthday in the spotlight at the Giants 50th Anniversary Media Lunch and Press Conference, held at Double Play Sports Bar and Grill, still at the site of 16th and Bryant; Perhaps Old timers gather in the bar to recall those Seals days!

Giants Peter Magowan, Giants President and Managing General Partner, and Larry Baer, Giants Executive Vice President and COO, announced plans to celebrate the clubs’ commemorative 50th Anniversary of playing in the City, after moving from New York in 1958. Giants Opening Day kick off April 7, and a series of events to follow throughout the season! Stretch stated he looked to the next 50 years “It’s been a good ride!”

Earlier mentioned Marcus Bookstore, and cause to pause for a Black History moment. The Fillmore store has a lot of history within it’s walls – the spirit of Jimbo’s Bop City, the legendary after hour Jazz club owned by Jimbo Edwards when on Post Street, closed in 1965 to make way for demolition and Japantown!

The building was saved when San Francisco businesswoman and community activist Essie Collins petitioned the San Francisco Redevelopment Agency to move the 3-story building intact around the corner to 1712 Fillmore, where it became a branch of Marcus Books (first established in Oakland), in 1960 by noted scholars and community activists Drs. Raye and Julian Richardson.

The Book Store became, and still, the heartbeat of the Black community, and a piece of Jazz history. Through the years the successful book stores have provided a vital place for African American resources, where scholars, writers, poets, and others gather to present their works or converse with the Richardson. Julian passed in 2000 .

The family operated business, Matriarch Ray Richardson at the helm, survive because the baton has passed on to daughters Karen Richardson-Johnson who manage the Fillmore store (with living quarters above) assisted by husband Gregg Johnson, their daughters Tamiko and Jasmine Johnson, while sister Blanche Richardson operate the Oakland Store located on Martin Luther King Boulevard.

Making the Rounds – Monday night at Yoshi’s on Fillmore to enjoy ‘Sepia’ a wonderful musical offering in recognition of Black History month which embraced 4 gorgeous Divas singing the music of the “Black Diaspora” the story of the Underground Railroad, trials and tribulations of slaves wanting to be free traveling northward; many died! Harriet Tubeman, a runaway slave, led hundreds of slaves – men, women and children escape along the railroad to freedom; she became known as the Moses of her People!

Vocalist Frankye Kelly, Sepia Founding Director/coordinator invited Lady Mem’Fis, Faye Carol and Denise Perrier to join her on stage; each doing a short set. And narrated by KCSM Jazz radio station announcer Melanie Berzon. Sepia was a joy! Through the years covered all four singers (especially Denise and Faye when they performed during the days of da ‘mo!) there to support this wonderful venture that should be a traveling piece!

High points – The ladies instilled the spirit of Nina Simone when doing ”My Name is Peaches”…Kelly performed Negro Spiritual “Swing Low, Sweet Chariot” …The Queen Denise Perrier got the goods on Bessie Smith, doing the hit “Back Water Blues”; Faye Carol, literally brought the house down, performed Ruth Brown’s hit “If I Can’t Sell it”, and on another cut blew us away with her Jazz rhythmic African chant – yodeling!; Lady Mem’Phis brought it all down front, flawless in red outfit down to her red high heels, showing off style, feeling and presence – floored myself and Monetta White (1300 Fillmore) with her sultry rendition of “Candy”!

The Band was tremendous, led by Saxman Bobby Tynes, who flew in from the east coast for the show, and Jazz pianist Tammy Hall, joined by Marlon Green on drums, and bassist. Folks on the scene included Blues singer Curtis Lawson, joined by his wife, who performed in the old clubs of the ‘mo! ; Stanley Williams, Artistic Director and Quentin Easter, Executive Director Lorraine Hansberry Theater. This Friday Gala opening of LHT’s new presentation, James Baldwin’s “Sonny’s Blues”.