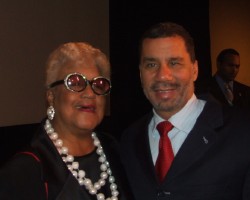 THE CITY PREACHER – REV. AMOS BROWN, President San Francisco Chapter NAACP should have been a happy man last Friday night for the NAACP Annual Fundraiser was successfully attended despite rumors of a threatened boycott allegedly from “FOES” who were mad with him for supporting NO on PROP 8!! Brown OUTED a few ministers, who according to him were boycotting the annual NAACP fundraiser!

FRUSTRATED when sponsors of 12 tables pulled out, called the MEDIA to express his outcry! And a call to NATIONAL headquarters in Washington, D.C. BEN JEALOUS, National President, originally had not planned to attend, dropped everything took a flight, there that evening for the dinner. Jealous stated the national chapter gave Brown $19,000 to make up for the revenue loss which would have been devastating!

I would be remiss if I did not point out the fact, originally Rev. Brown DID NOT SUPPORT the appointment of Jealous to take the helm, after the previous president quit, feeling he was too young, not experienced, BUT LOOK WHO CAME TO HIS RESCUE!!!

One supporter who I have known for years, BLACK and proud, involved for years in a domestic partnership, both attended the dinner, recently wrote an opinion piece published in the Bay Area Reporter Newspaper (REJECTED by a Black paper), encouraged support for Brown who he felt put his convictions on the line, wrote “If we want a friend we must be a friend, and if we want an ally we must be an ally.” The piece went on to express “NOW IS THE TIME to stand with Brown as he has stood for the cause of civil rights for gays and lesbians.”

The CATHEDRAL HILL Hotel Ballroom, small but packed with a diverse group of guests who paid $150.00 per-person! I was told by a committee member after the boycott news hit the papers Friday, members of the LGBT community called the NAACP office to purchase tickets! RIGHT ON!

The theme of the evening “Seizing Our Moment of Triumph” in celebration of Senator Barack Obama as the FIRST African American to be elected to the high office of President of the United States of America was indeed a time to REJOICE, and the historic feat of Keynote Speaker GOVERNOR DAVID PATTERSON, the FIRST Black Governor of New York! He came on the radar screen BIG TIME when DETHRONED Governor SPITZER, caught up in a scandalous tryst, made news that self-destruct what was considered a brilliant career – possible future run for the White House.

An amazing man, Governor Patterson, an historian, filled with a wealth of knowledge shared during his address the underground Cemetery in New York. In closing remarks acknowledged Rev. Brown as a courageous man, steadfast in his commitment to his beliefs vital issues!

FIRED UP AND READY TO GO, Rev. Brown seized upon the opportunity during his opening remarks, in bellowing voice, hands stretched high, like a QUARTERBACK coming out of the pocket, literally THREW A HAIL MARY PASS for a TOUCHDOWN, again expressing his stance on No on Prop. 8; like fans during a football game, CHEERED, gave him a standing ovation from half of the audience, while others were silent, stunned, caught off guard he would voice his opinion AGAIN!

THE WAY I SEE IT – under Brown’s leadership the San Francisco NAACP Branch will embark on change – A NEW MOVEMENT to take up the cause in coming together understanding the LGBT community, and their cry for SAME-SEX CIVIL RIGHTS to Marry! AND the City Preacher will CONTINUE despite worshippers objection, like it or not, SUNDAY MORNING preach the sermon at the pulpit in THIRD BAPTIST CHURCH!!

I might note there was a LONE PROTESTER carrying a sign supportive of YES on 8, standing in front of the Hotel parking garage Van Ness entrance, and RETURNED SUNDAY MORNING in front of THIRD BAPTIST CHURCH!!! I heard Reverend confronted him, CALLED HIM A BIGOT!!! Heard some members ran him away, SIGN WAVING IN THE AIR!

Masterful orator RAY TALIAFERRO emceed the evening with GUSTO, kept the program rolling along despite noise of food servers! CASSIE COOK, the PASTOR’S RIGHT HAND LADY, Event Chair and her committee did a great job (HAPPY BIRTHDAY LADY – Today , November 26 is her BIRTHDAY!)! BRAVO to vocalist SARA WILLIAMS who lead in the singing of “Lift Every Voice,” blessed with a beautiful soulful sound!

There I was IN THE MEDIA MIX intent on meeting GOV. Patterson, readily available … the main question who would he appoint to Senator Hillary Clinton’s seat IF she should accept President-elect Barack Obama’s call to serve as Secretary of State of which he would not reveal what his decision would be, but would be his call! THANKS to San Francisco Post Newspaper photographer ACE WASHINGTON for the marvelous picture of myself captured with the Governor!

Dr. GEORGE DAVIS, along with his wife KATHY, both Directors Bayview Multipurpose Senior Centers, were elated to meet Gov. Patterson – both Doc. and the Governor are legally blind BUT functional. Doc was pleased to have an audience along with a select group of VIPs in Patterson’s suite.

THE MEN IN BLACK – Aaron Dunn and Julius Banks, flanked myself and politically savvy Thelma Bridges who during the years worked on several political campaigns; and REV. CAROLYN DYSON, Program Manager for African American Breast Health at California Pacific Medical Center. HAPPY to see her, for it’d been some years! That evening the NAACP HONORED her with “Community Health Advocate Award”;…Joined DR. CEASAR CHURCHWELL at his table with his wife Ruth, daughter Gabrielle; extraordinary CPA Hyacinth Ahuruonye (a MAN ALWAYS ON THE MOVE); and handsome scientist DR. FREDERICK MOORE.

Before moving on, the NAACP HELD THEIR ONE DAY ELECTION this past Sunday at its headquarters in West Bay Conference Center – DR. BROWN was RE-ELECTED. I would suggest he get HIS HOUSE IN ORDER … went over Sunday afternoon to vote, DENIED despite showing my membership card good through June 2009 (took a year just to received the card from national headquarters, paid for by member JULIUS BANKS in 2007 (!!!) insisting I REJOIN! I’d dropped out years ago! Well the staffer couldn’t find my MEMBERSHIP record! After much conversation on my part, FINALLY staffer relented, Instead of a regular ballot, Offered a provisional form – NO THANK YOU!!!

BROTHER CAN YOU SPARE A DOLLAR??? TIMES ARE TOUGH! The slogan use to be BROTHER CAN YOU SPARE A DIME! People have lost not only their jobs but HOMES – some HOMELESS! JONES Memorial Methodist Church on Post between Fillmore and Steiner are about helping those less fortunate – FREE! This collaborative ministry has been going on for several years.

Last Wednesday afternoon longtime friend RUEBEN NASH invited me to join him for lunch at the church to support the ministry coordinated by MS. ELLEN HAYNES, Retired nurse and her volunteer crew – many whom I remembered from the lively days of the Fillmore, that included: FANNIE SULLIVAN, CHARLES AND HAZEL HARRIS, RUTH STURGEON, TROY DANGERFIELD, Retired San Francisco Police commander at the Housing Authority. Retired buddies came over to support the day, for their Wednesday get together that included retired policemen: RODNEY WILLIAMS (Director of Community Relations), JOE WILLIAMS, SAM CRAIG (retired earlier this year from his position as Deputy Chief under Police Chief HEATHER FONG); and ART TAPIA, retired commander, President of The Black Officers for Justice (The organization recently celebrated its 40th Anniversary). All gave cash donations.

RUEBEN, retired former TWA SKYCAP, now successful businessman who CO-OWN a concession at the San Francisco Airport. The outspoken gentleman BLEW me away with STARTLING NEWS! DOES ANYBODY KNOW WHAT HAPPENED BETWEEN RUEBEN AND WELTON FLYNN’S AIRPORT PARTNERSHIP???