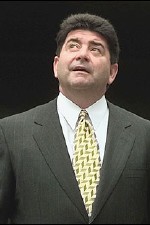 The man who led the 49ers football team of the 80s, EDWARD J. DEBARTOLO, Jr., former owner (1977-2000) was honored at CANDLESTICK Park Sunday during the Season Opener at halftime. FIRST INDUCTEE into the NEW 49ers HALL OF FAME named after his father, EDWARD J. DEBARTOLO, Sr. who purchased the club in 1977.

Fans, including myself, missed those glory days when MR. ‘D’ was a wheeler dealer to get the best players, no matter the cost, successfully put together a dynamic team never experienced in all 49ers 60 year history! Regarded as one of the most successful owners in the history of professional sports after taking over the 49ers in 1977. In 23 years at the helm, he guided the 49ers to a 22-11 post season record and 13 division titles as San Francisco became the FIRST franchise in NFL history to win FIVE SUPER BOWL Championships (1981, 1984, 1988, 1989 and 1994).

Clearly remember the HAIL MARY PASS, noted as “THE CATCH” that propelled the FIRST SUPER BOWL in 1981! At the time on the field as a member of the press, camera aimed, captured the moment!!

AH, MR. ‘D’ gave us many exciting years; SAD when he was FORCED TO RELINQUISH his power and ownership DUE TO SCANDAL of his own making!

When I came aboard as a 49ers season ticket holder in 1975, BEFORE EDDIE DEBARTOLO, Sr. purchased the team in 1977. A man of wealth derived through SHOPPING MALLS. My son loved football, and we’d attended a few games at KEZAR Stadium; so a gift for his 12th birthday, by then the team had moved to the NEW CANDLESTICK Park shared with the GIANTS!

49ers Play not impressive – hopes rose when O.J. came aboard, but still not contenders – in the LOSS column more often than winners; many fans left, to them a sinking ship; my son disenchanted as well, left holding 2 tickets I couldn’t give away! Despite loss of money, HUNG IN THERE!

CHANGE CHANGE CHANGE!!! When Debartolo took over, the START OF A DYNASTY! He hired BILL WALSH as head coach (1979-1988), Quarterback JOE MONTANA, RONNIE LOTT, DWIGHT CLARK to name a few; former ticket holders scrambled back once the team started winning! GOOD years until EDDIE, JR. was forced to give up control!

DENISE DEBARTOLO-YORK took over with husband DR. JOHN YORK; regrettably what was a close family, relationship between the siblings turned soured, hurt the team, but THE YORKS kept it together! Both Denise and her brother inherited the team when their father passed, she let Eddie run the operation, but she has been an integral part of more than 3-decades of 49ers football, including 5 Super bowl victories!

Now their son and Mr. D’s nephew JED YORK, has come of age, appointed PRESIDENT of the 49ers organization, showing the charisma of his beloved uncle, and DR. YORK’S business expertise, MAKING A DIFFERENCE, SHOWED THE RIGHT STUFF when he appointed MIKE SINGLETARY HEAD COACH, a man who wants winners! I have yet to met Singletary but pleasant meetings with JED and DR. YORK ; ALSO MR. D!

Back in late 90s, traveled with Eddie, Jr. and entourage as member of the press, to fly down to southern CA, and the MILLS SHOPPING MALL that exemplified DeBartolo’s vision for the current site of Candlestick and a SHOPPING MALL there on the HUNTERS POINT site ( now surrounded by new housing). San Francisco voters had approved the Proposition. WELL here we are in 2009, talk of moving the team to Santa Clara!

The ‘STICK was HOT on and off the field! Another win beating the SEATTLE SEAHAWKS! Running back FRANK GORE broke out, ran for a touchdown before I could hardly settle in my seat! Again a touchdown third quarter. THE BROTHER IS HOT! At the end of the game FAITHFUL NINERS left happy over the 23-10 win! The new season offers HOPE !

HYPED UP, arrived to the ‘STICK minutes before the gates opened! Straight to the 49ers administrative office, mingled, just missed the opportunity to chat with DR. YORK. BUT at the RIGHT spot to rap with JERRY RICE, introduced to his pretty daughter, PRAISED his performance on TV’s “DANCING WITH THE STARS”. A wide grin crossed his face! Shared that was the only time I faithfully watched the show!

Conversed with 49ers Usher PHIL TIMMS, shared head USHER JOHN SANDERS had RETIRED! Missed R&B SINGER JEFFERY OSBORNE’s performance of the National Anthem – meshed in the crowd purchasing a sun visor 49ers cap – NECESSARY for it was hot! This season UPGRADED my seats to lower East side , 30 yard line, 16 rows up from field!

BRIEF NOTES – The President’s Cup 2009 at HARDING PARK October 6-11. The Lake Merced golf course, now a GOLF VILLAGE, beautiful lush greens, sparkling painted white new buildings, spectator stands, readying for the PRESTIGIOUS Tournament, AND TIGER WOODS and POSSE of prestigious professional golfers! HEARD PRESIDENT BARACK OBAMA will present the winning trophies on last day of play. SECRET SERVICE MEN will be all over the place … DEFINITELY WILL CHANGE LIFE for those of us living in the area around Lake Merced!

HAPPY BIRTHDAY to DR. TOYE MOSES, Commissioner Immigrations Board – Tomorrow is his day!; CONGRATULATIONS to San Francisco Port Commissioner KIMBERLY BRANDON, REAPPOINTED last Thursday when she appeared before the Board of Supervisor’s RULES COMMITTEE for a recommendation to serve a 4th term on the Commission. Among those there to support her was Commissioner Brandon’s FIANCÉ, CA Public Utilities Commissioner TIMOTHY SIMON, stood tall, handsomely dressed, took a moment before praising her qualifications, to articulate he’d wish the Supervisors would ENCOURAGE her to MARRY HIM!!! They laughed – I gasped in surprise!!!