“I Heard That”: Making the Rounds … 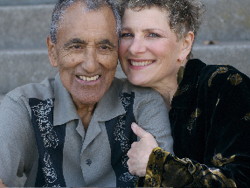 Prior to the ALL-STAR game, there Sunday at AT&T Park for the GIANTS last home stand vs Cincinnati REDS, and pre-game celebration and reunion of the GIANTS 2002 World Series team managed by DUSTY BAKER, in what was a heartbreaking lost, won by the Anaheim Angels (now L.A. Angeles). .A game he will never forget! Dusty, manager of the Reds for 5-years, on the field wearing a Giants uniform top, flanked by players of the 2002 team, acknowledged by Giants CEO LARRY BAER who presented him an award. A proud beam on my face as I watched from the press box; tears welled in my eyes.

July 4th fell on a Wednesday, the day this column is published on BeyondChron, but the site close down on holidays and weekends, therefore my comments of the pre activities and game shortened. But did get a chance to chat with Dusty in the visitors locker room.

MAKING THE ROUNDS in the City … For the third year, Summer time action in the Bayview. DR. GEORGE DAVIS Senior Center, once again present LIVE music on selected Monday Nights, coordinated by SUSIE TYNER, Program Director of the Center, and coordinator of the Summer Monday Night Jazz Concerts, an evening of socializing and sweet jazz, within the Senior Center’s social room, there at Yosemite and Lane Sts. A lover of jazz, Tyner has booked several Bay Area musicians to perform in what has become a fun night!

CHECK IT OUT – The musicians DONATE their performances! Monday, July 2, Kicked off another exciting summer bash. The Swinging NONAME Jazz Band, which featured SIR CARLTON on drums (and hookup to many of the musicians that have appeared on Monday nights), recalled sounds of Horace Silver, Lee Morgan, Benny Golson . This past Monday night The O.G. Rhythm and Blues Band ROCKED THE HOUSE! For upcoming shows, contact Susie Tyner at (415) 822-1444.

CRUISIN’ over to the cozy neighborhood of GLEN PARK, small village of quaint businesses, and BIRD AND BECKETT Bookstore on Chenery Street. Overflowing with books, books, and more books, newspapers, magazine rack where I purchased the latest Jazz magazines – Downbeat and Jazz Times.

Guess what? Not your normal bookstore – early Friday evenings there’s LIVE MUSIC – JAZZ, performed by noted Bay Area musicians during Happy Hour, about 2 hours until 8 p.m. On certain nights, poetry reading or whatever else inspires owner ERIC WHITTINGTON’s passion to spotlight in his already crammed quarters. .

Recently stopped in the literary and Jazz JOINT on a Friday, knowing master guitarist EDDIE AND MADELINE DURAN would be performing. Madeline blowing on Sax. They are a marvelous husband and wife team, who travel all over the world, featured on major festivals and night clubs, but live in Sonoma wine country.

Would’ve never expected to hear them in Beckett’s small space, joined by Rhythm section – Aaron German on bass and drummer Ron Marabuto. Eric has centered a make shift carpeted band stand stage, between book cases – noticed a picture of the late bassist Vernon Alley above the stage on a corner space.

Beckett’s is a neighborhood delight – neighbors and supporters (including his mom) gather, bringing knickknacks, wine , and other nibbles for the Jazz happening.

Mellow with age, like fine wine – Eddie, long identified with the San Francisco Jazz scene, is a BEBOP legend, having played with Bird, Stan Getz, Earl “Fatha” Hines, Cal Tjada and others. Played the famous SAY WHEN Club when on Bush Street, and in 1952, the year that Bebop genius Charlie Parker (aka BIRD) played there with local boy Eddie Duran on guitar for a two week engagement. Some 60 years after that storied event, the venerable elder statesman’s famous frame seated in the bookstore on a stool , strumming on guitar, delighting followers like myself!